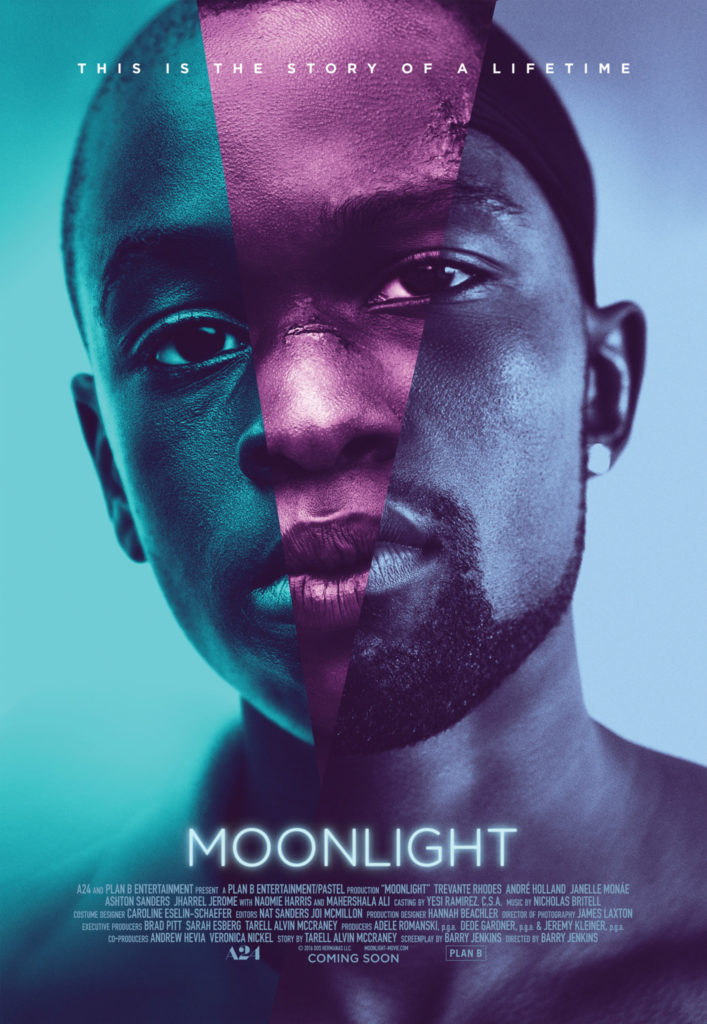 Billed as ‘the story of a lifetime,’ Moonlight makes and leaves an unfinished life. This remarkable film is uniquely involving for what to some might feel strange, frank and dissonant. The carefully shot and edited movie, which takes place in Miami, is both disturbing and mesmerizing.

As neat and tidy as I like a movie to be, Moonlight is too neat, too deliberate in its unsentimental approach and its use of the word ‘nigger’ and it is too shallow in its characterizations. Superficially, this gay-themed coming of age tale about a boy in the South Florida ghetto gets deep in sensory immersion. The actors who play the lead character, Chiron (pronounced shy-rone), are each exceptional in the role. The whole cast makes this movie like watching a gentle, sad dream drift into a nightmare.

The drug man with chocolate brown eyes that melt when they look upon a lost, deflated boy becomes like a father to Chiron. In a pivotal set-up scene at a diner, the hardened adult sees that the wordless child is deeply and easily harmed. The mentoring begins. As soon as he meets the boy’s high-strung, single mother (Naomie Harris, Collateral Beauty, Pirates of the Carribean 4), the mentoring becomes an unspoken vow. The pusher’s girlfriend (pop singer Janelle Monae, Hidden Figures) steps in as a surrogate mother and goes by her own judgment. When asked his name, the confused boy answers with the truth and explains that people call him Little. “Well, then I’ll call you Chiron,” she says.

This moral fable unfolds in layers, with music at the movie’s center and striking, lyrical touches in sound and vision. Chiron’s outgoing schoolmate friend, Kevin, never seems far from the sensitive boy. The wealthy drug pusher and his nurturing female housemate offer sanctuary from his unpredictable, unstable and unloving mother. The surrogate father teaches the boy to swim—rendering an afternoon of fatherhood with a baptismal lesson on how to float—and Chiron gets to let his guard down and experience the good.

But worlds collide. Blood spills. The word ‘faggot’ comes and gets defined, truth comes out and the head hung low is no longer Chiron’s. Reality in the ghetto remains and Moonlight serves a potent depiction of the school, home and neighborhood as imprisonment. As Chiron grows up, still not fitting in, he lives in fear of others, literally sometimes in a kind of cage. No one—not his mother, not his teachers, not Kevin—is free to guide, protect and love him and those who might are in their own kind of enslavement. This is Moonlight‘s dilemma, conveyed evocatively by writer and director Barry Jenkins, with story credit to Tarell Alvin McCraney.

This is also the film’s construct and it feels like a construct. Crucial action happens offscreen. Characters evolve, embrace and die out of focus, out of view and the movie’s brand of impressionism robs the story of impact and intimacy. Chiron is borderline autistic and his silent torment is easily Moonlight‘s most effective dramatization. Surely, this gay, black ghetto story is rooted in reality. Of course, drug pushers are hardened by life and it’s important to know that they, too, are human, and Moonlight delivers this point with poignancy. When the Caribbean Sea’s waves break against the shore under the moonlight amid poetic urban lament and as prelude to suppressed desire’s release, the rhythm and frame are beautiful.

But action is unseen, removing parts of the resolution to the conflicts that make Moonlight worth watching.

At its best, Moonlight depicts an often untold tale of ordinary men. Its cast, especially Alex Hibbert, Ashton Sanders and Trevante Rhodes as Chiron at three life stages and Andre Holland (Selma, Black or White) as the adult Kevin, performs admirably. The mental and physical abuse experienced by the boy at the mercy of ghetto classmates, sanctioned by school officials including a female official who shames the victim, suggests a formative answer to how American blacks’ poverty turns the innocent into the hostile. But Moonlight is too coy, contrived and stylized to wholly show and tell what has been unseen and untold about thug life. As it is, this is a tragically compelling, if not everlasting, tale.