Movie Review: Made in Italy 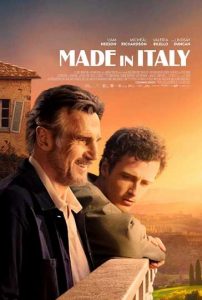 Made in Italy is charming and unpretentious. Written and directed by an artist named James D’Arcy, who’s also an actor, the movie, which I watched on a TV screen at home, is somewhat, though not entirely, predictable. The film is lovely to look at.

The performances are good. It’s a lighter leading role for Liam Neeson (Batman Begins, Schindler’s List, Rob Roy, Star Wars: The Rise of Skywalker, Kinsey), who, like his character, was widowed after a terrible tragedy.

Made in Italy is exactly as advertised. An artist in London, played by Mr. Neeson, who is a distant father to his London art gallery owner son (Micheál Richardson), agrees to return to the family’s Tuscany home in the Italian countryside. The goal is to sell the home and raise money for the son’s gallery, though there is more to the story. Add a local businesswoman and divorced mother (Valeria Bilello), the real estate agent (Lindsey Duncan, Gifted) and villagers as well as the son’s wife and the sum total is a thoughtful and moving motion picture about the smallest choices and intimacies and a family’s past, grief and recovery.

Made in Italy refreshes the spirit. Watching the film is like taking a miniature vacation. Besides being appealing to look at, contemplate and indulge, the movie affords a temporary escape from the madness of today’s anarchy and mass hysteria.

Four main characters strive to make food, money and art. They do so with a sense of decency, restraint and self-respect. If you could gain from a realistic, romantic respite from looting and anarchy and want to affirm that it’s possible to live among those who do not destroy lives, properties and reputations or induce panic, shakedowns or lynch mobs, see this film about damaged and honorable Westerners striving to be left alone to create and live in peace. Made in Italy offers 90 minutes of humor, mild conflict and clear resolution.