For a thoughtful and embracing new Christmastime movie, see Collateral Beauty with Will Smith. This is probably the best new Christmas-themed movie since 2005’s The Family Stone and for many reasons—some the same, mostly for different reasons, though. What’s the same is that both movies have a major twist. Both pictures have an excellent ensemble cast. Both films deal with Christmas as a marker in time which, like life, is hard to move and change and yet it can light up the darkest corners.

Smith (The Pursuit of Happyness, Concussion) is capable of making bold choices in movie roles and this is one of them. Playing a man whose child has died is bold enough for one of Hollywood’s top movie stars, especially after portraying a doctor who challenged the football cartel and its millions of followers in Concussion, an outstanding motion picture which deserves more attention and credit than it gets. Playing a man who expresses emotions, too, is a risk, especially at Christmastime and undoubtedly in a season when you’re competing with another Star Wars movie and audiences seem to want more of the same mediocre sludge or are eager to be satisfied with an expensive thriller experience. Today’s mass audiences don’t want movies that make them think. They want movies that come pre-approved by others; movies that feel safe and have an aggregated review score, which merely attempts to quantify what others think. I suppose it makes them feel connected.

Collateral Beauty makes one feel connected by provoking the individual to think. It does this by setting up Smith’s character, Howard, with an enticing scene in which he plays a successful businessman with a specific philosophy that’s original, proprietary and utterly functional if not widely practiced and then threading that philosophy throughout the rest of a movie in which the hero stumbles three years later. The ad agency chief is despondent after the death of his child. That his spiral culminates during Christmas in New York City makes sense to anyone who’s had to face life after death—death of a loved one, death of a marriage, death of a child—and allows the filmmakers to lather the dreamlike Collateral Beauty with the holiday lights and city bustle that can, on blue and lonely days, become soft and soothing rhythms of life. 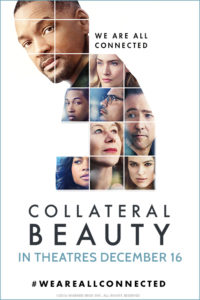 As Howard bicycles and all but sleepwalks through his multi-million dollar company’s deteriorating market viability, with his friends and co-workers on the verge of being fired due in part to his self-negligence, he slowly settles his inner sadness, calls out Time, Love and Death (helped by Ann Dowd as an accomplice and private detective) and deepens his appreciation for friendship, family and work. Of course, it’s not that easy and there are at least a few twists, which, unlike a Shyamalan movie, are not shortcuts, cheats or tricks. Lessons in chasing love, facing death and living in time abound. The magic here is earned and, though it takes a while to let it in, this light yet somber fable is compatible with the rational audience and very rewarding for anyone with a whole sense of life.

What Collateral Beauty is not is overly sentimental. To the credit of New Line Cinema, cast, crew and filmmakers, including Warner Bros.’ new president Toby Emmerich (and, incidentally, President-elect Trump’s new secretary of the Treasury, Steven Mnuchin), who executive produced Collateral Beauty, and with uplifting and elegant performances from the cast, notably Will Smith, Helen Mirren, Jacob Latimore, Naomie Harris, Michael Pena, Edward Norton and Kate Winslet, what debuted in movie theaters this weekend is a movie to be proud of for everyone involved and much better than dark and bleak movies lacking spirit, soul or life. Life isn’t fair. Neither is what wins the box office. But I’m confident that enlightened audiences will discover Collateral Beauty in the future. Here’s wishing for such an audience—especially for the audience of one—a Christmas that comes neither too late nor too soon.