What was it like to be black, female and exceptionally skilled in 1961? This question is at the core of writer and director Theodore Melfi‘s Hidden Figures, a topical, authentic and fascinating look back at mid-20th century American exceptionalism from a fresh and life-affirming perspective. Melfi (St. Vincent), who co-wrote the screenplay, probes beyond racism, making this movie fuller than others in the mid-century American true story genre (Selma comes to mind).

Hidden Figures is as logical as math. As with 42, the movie is direct and linear, so what you see and get is a depiction of the woman of ability in three workers for the U.S. space program: Mary Jackson (singer Janelle Monae, Moonlight), Dorothy Vaughan (Octavia Spencer, Black or White) and Katherine Goble (Taraji P. Henson, Cookie on Empire)—all working to launch an American astronaut into orbit. 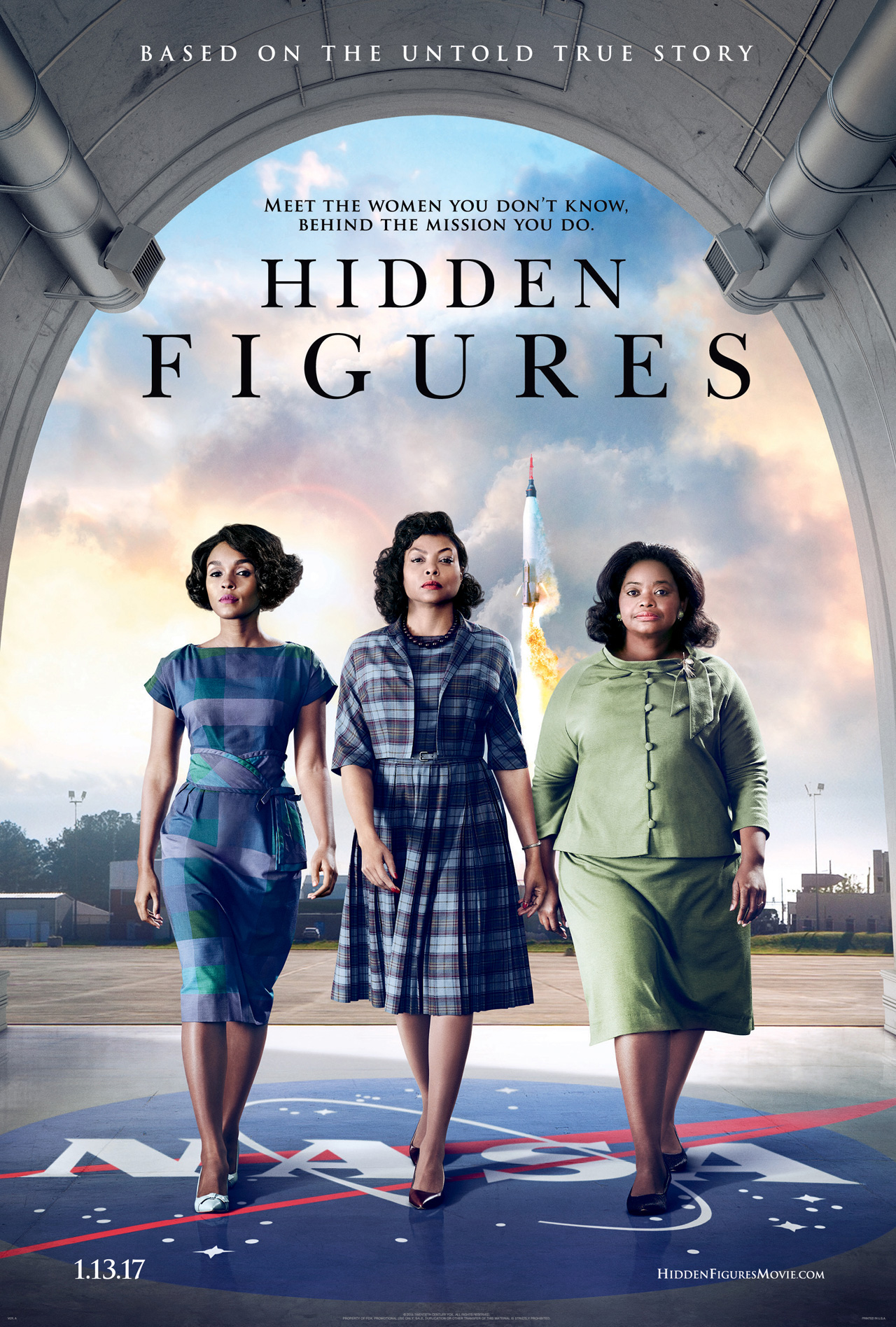 Prefaced by a flashback that sets this up with a drama of the gifted child, to bend a phrase from Alice Miller, Hidden Figures (based on a book) starts with the trio stranded on a Virginia roadside. Spencer’s Dorothy solves a car problem. Mary sasses. Katherine imagines. A trajectory is charted from there.

The direction is upward, with a few twists and offshoots. Tracking the Soviet Sputnik satellite, which posed a threat to the United States, NASA’s Mercury and Friendship programs and the effort to put John Glenn into orbit, Melfi and company recreate rational action led by a boss portrayed by Kevin Costner (Black or White). Costner’s character personifies the secular humanist theme, reminding his numbers-crunching, Langley, Virginia, team that calculations for putting man into space ultimately redound to the individual and one’s values here on earth.

“Look past numbers”, he urges, a piece of wisdom which applies to today’s aggregated and automated industries—especially to those working in government programs—and choose instead to think. When he needs someone who knows math, up from the team’s pool of segregated black women, despite the instant desegregation, comes a particularly bright Negro named Katherine (Henson). This lady knows advanced math. More crucial to the boss, the mission and her life, she knows how to tune out distraction and avoid any tendency to rationalize. Similarly, and appropos of their abilities, Mary and Dorothy put their goals on track, too, while helping to put John Glenn in space. Glenn, who later became a U.S. senator from Ohio who propagated the welfare state and who recently died, is portrayed as a freethinker.

The script serves each character’s turn. For example, Dorothy (Spencer), going against a bureaucrat (Kirsten Dunst in a career best performance), strives to match her skills to her livelihood. From tinkering with the stalled car to being first to step up to face bad news (the film tracks the civil rights movement, too), her vigorous leadership is integral in her everyday life. Sassy Mary (Monae doing a fine job) chooses to focus her smart mouth on breaking a racist barrier and becoming an engineer. She’s also unashamed to express sexual desire for a white man and do what a white man (who’s a Jew) says he wants her to do as she builds the case for her own cause.

The women in Hidden Figures act for selfishness, not for altruism.

This is undeniable; they do not act for the sake of the race, tribe, sex, God or others. Each woman bases her identity on character and her self-esteem on knowledge gained by her reasoning mind. Dorothy, in a triumphant scene, chooses to reclaim property which she properly regards as hers, explaining the context to her son, who thinks Mom is stealing from the government. Dorothy does this to acquire knowledge, amplifying the point. Octavia Spencer (Snowpiercer, Black or White, Zootopia) portrays Dorothy Vaughan’s determination with precision in a measured performance which underscores that she is one of the screen’s best actresses. So, too, does Henson as Katherine, who meets a man (Mahershala Ali, the drug dealer in Moonlight) during her NASA tenure.

Katherine pushes, tests and strives to be her best against extreme prejudice and this, too, is undeniable. Rarely has the toilet’s role in the American history of ostracizing others been so memorably dramatized as in this sequence of workplace coffee scenes leading up to a total breakdown. Melfi captures the emotional damage inflicted by those moved by collectivism—in this case, by its most primitive variant, racism—upon the individual. He does this through strong and subtle character development in performances which all shine, down to the smallest roles, including his wife Kimberly Quinn’s as Ruth and Jim Parsons’ as lead engineer.

The three leads (and Costner) excel at the top of the cast, showing that each woman of the mind simply tries to do her best work; moreover, each woman enjoys her work and knows its value, which is why the film’s positivism is a crucial, bold and skillfully made decision. Activism becomes an urgent practical necessity born of the clash between progress and bad philosophy, i.e., traditionalism and collectivism.

This is what makes Hidden Figures inspiring. These women were pioneers, yet they were exceptional, producing impeccable results for the greatest nation on earth. Melfi recognizes this, too, and he does so with his trademark poignancy and humor (see his St. Vincent if you haven’t already) in scene after scene. These three women were ambitious, proud and selfish—qualities we’re taught to reject as unsavory—and he honors them both for acting as egoists and as Americans who refuse to opt out of a partly unjust, partly free and changing society. Mary, Dorothy and Katherine, as portrayed in Hidden Figures, act as if they know that their defiance of the U.S. government is an assertion of their moral right to pursue happiness. Each unmistakably acts for her own sake. Yet each acts as unmistakably as a patriotic American. Hidden Figures shows that this alignment was especially, powerfully hard and admirable for the black woman of the mind.

But you need not hold selfishness as the top virtue to find something wondrous and enlightening in the stories of these Hidden Figures.

Though it tends to come off as too good to be true, skimming too much of their lives, Hidden Figures displays a certain love for one’s work—depicting reverence for productiveness—in carrying out a mission which concretizes America at her best. In this way, Theodore Melfi’s Hidden Figures dramatizes that, in America, the individual who calculates what’s in her self-interest can—despite whatever others and the government do to keep her down—reach for the stars and achieve whatever she wants.