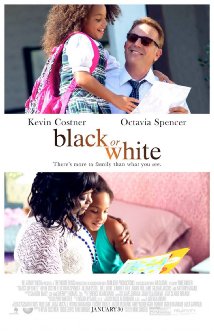 Mike Binder’s new movie co-starring Kevin Costner (Man of Steel, JFK, The Company Men), who also produces, and Octavia Spencer (Snowpiercer, The Help) opens in a somber haze at a hospital. So begins a story of cleaning the lens that distorts reality. The insightful Black or White depicts today’s toxic racial tension as it exists in everyday lives. It aims to recreate human harmony.

After his wife (Jennifer Ehle, The Ides of March, The King’s Speech) is killed in a car crash, Kevin Costner’s lawyer character, Elliott, gets support from a colleague (Bill Burr), though he gets worse, too, spiraling into an alcoholic stupor as he goes back to his Brentwood home, where he grandparents his late daughter’s child, Eloise (Jillian Estell). This tale of a drunk white male’s effort to survive his loss shifts and pivots between what lies within one’s control and what, including one’s blood, does not.

Elliott’s granddaughter is racially mixed, which complicates—and, ultimately, yields an opportunity to contemplate and clarify—his life. The final scene of the first part of the multilayered Black or White, which slices through the gray, shows Elliott standing before an empty bed. The rest of the movie depicts an effort to use his mind to reconcile the void, let go and achieve peace. In this sense, Black or White evokes other custody battle pictures in which a man is tested, changed and enlightened, including Ted Melfi‘s recent St. Vincent with Bill Murray and Robert Benton‘s absorbing Kramer Vs. Kramer (1979) starring Dustin Hoffman.

Writer, director and producer Mike Binder, who directed Kevin Costner as a drunk in The Upside of Anger 10 years ago, deploys his trademark method of revolving main, secondary and minor characters to unravel the mystery of a man’s remaking.

Binder tracks surly Elliott, an L.A. attorney, after his wife’s memorial, capturing the widower’s loneliness as he did with Joan Allen’s bitter lament in The Upside of Anger and depositing him into the arms of his granddaughter’s other grandparent, Rowena Davis (Spencer). That Rowena is black is incidental for a while and part of the magic throughout Black or White comes from Binder’s deft portrayal of people for whom whether one is white, black or mixed matters only in a temporary context. He mines the humor in prejudice, rationalization and self-contradiction as he captures southern California’s ethos of laissez-faire optimism. It’s a subtle balance.

Being black or white does matter in today’s world and Rowena, concerned for her granddaughter’s welfare, exploits race to sue Elliott for custody. Never mind that her drug addicted son, Reggie (Andre Holland, Selma, 42) isn’t really a father to his daughter. The girl, like any intelligent grade school student, wants to be her best. She studies math and piano with Duvan (Mpho Koaho), enjoys swimming, cooking and playing games and lives with her grandfather Elliott and his housekeeper Rosita (Bertha Bindewald).

Eloise is a bright, conflicted child. She notices that her granddad drinks too much. She romanticizes her absent father. She sees differences but no contradiction between her family in Compton and her grandpappy in Brentwood. If only for practical purposes, her dad’s lawyer uncle (Anthony Mackie, Captain America: The Winter Soldier, The Hurt Locker) wants the family court judge (Paula Newsome) to think different.

Binder’s script delves straight on into bigotry in the contest of race-baited wills between the self-made Rowena and the self-destructive Elliott and their partisans. With sharp lines, seamless plotting and well-crafted points in a tale of two southern California cities, Black or White evolves, swaps and provokes with rhythmic writing and propulsive action as inebriated Elliott heads into a tailspin.

Each character is intricately drawn and this is a major accomplishment in a movie with sensitive themes about race, identity and self-esteem. Rowena is strong but stubborn, firing off judgments faster than she makes connections. Eloise is both sheltered and overindulged while being totally forgotten in both worlds, as children of custodial conflict often are. The judge quietly learns to temper her bias against the same race. Anthony Mackie’s attorney abides his sense of justice while going for blood on behalf of his sister. Duvan the immigrant tutor represents the all-American. Reggie, too, earns and then discards a certain allegiance, depending on one’s context. Even a legal secretary who enters a room during a conversation about her race signals one’s invisibility to the other race. All of these imperceptibly scouring characterizations, black or white, are realistic. The cast, especially Ms. Spencer and Mr. Costner and Estell as Eloise, are superb and Compton native Kevin Costner, an actor who leads on judging individuals as individuals by example (The Bodyguard), particularly in his brilliant eulogy for Whitney Houston, is the film’s perfect spokesman.

Elliott, in Mr. Costner’s weary, fading and sad portrayal, represents the way to find inner peace in a man among men. His is an argument which amounts to a defense of rationality at the core and, crucially, only at its best. This is in contrast to his actions throughout much of Black or White, which is deeper than it first appears. If last year’s similarly themed The Hundred-Foot Journey is too soft, Black or White is as hard and jagged as its title. But like its ancestor, Stanley Kramer’s scathing Guess Who’s Coming to Dinner (1967) it compounds the story of a lone, fallible Californian and gracefully folds it into a story for mankind.

Time has increased my admiration for Black or White, which was criticized for being too pat when, in fact, the film is ahead of today’s critics and audiences. This groundbreaking movie deserves a wide audience. The Blu-Ray edition (including digital code) for Mike Binder‘s movie comes with the standard bundle of extras. An original trailer and preferred settings are provided, of course, and the picture quality, viewed on a large, high-definition television screen, is excellent. Personally, I would have liked to have seen and heard more from Binder than disc bits offer here, though there’s always my exclusive interview with Mike Binder for a whole examination of Black or White. 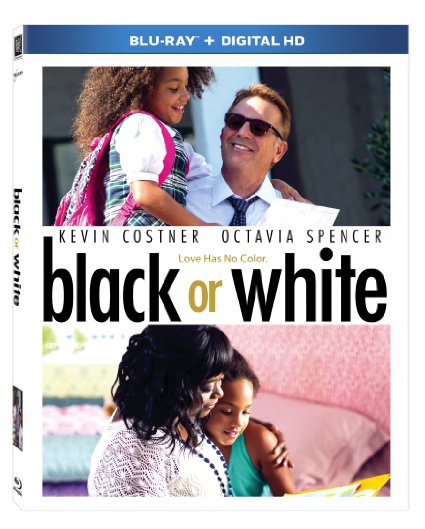 Binder’s incisive movie is headed by its leading male and producer, Kevin Costner, who is prominent on two relatively short features and a main feature. The shorter bits are too promotional and redundant to the longer piece, which is about 24 minutes long, a behind-the-scenes overview which, to paraphrase co-star Anthony Mackie, makes you think about the issues raised, laced and dramatized with irony not derision. This is the best part besides Relativity’s movie, which is a selective recreation of life in Los Angeles. The leads are featured, too, as is Binder. Supporting cast members are also included for thoughts on the filmmaking. Standouts include Mackie, the girl who portrays Eloise (Jillian Estell) and Mpho Koaho. They each have clearly thought about their roles and this deepens one’s appreciation for the movie.

Costner discusses his interest and involvement though it’s Octavia Spencer who applies Black or White to today’s context and her acting ability and professionalism is also extremely apparent. I had not been as familiar with supporting actor Bill Burr, who is excellent as Costner’s attorney and friend, in his work as a comedian and the Blu-Ray extras cover that ground, too. I wanted to see and hear from other key cast members, such as Paula Newsome and Andre Holland, though one of the reasons why I think Black or White succeeds, in spite of any audience predisposition, is its wider-than-usual variety of an incredibly talented and well-directed ensemble cast, so it’s easy to want to gain thoughts and then some from everyone who participated in realizing Mike Binder’s impeccable screenplay. As it is, Black or White is an intelligent, warm and amusing film. (Click on the image to buy the Blu-Ray).