This light comedy series deserves its reputation as enjoyable. The six-season show, which aired from 2015 through this spring, costars Catherine O’Hara and Eugene Levy, who both also co-produce the program. 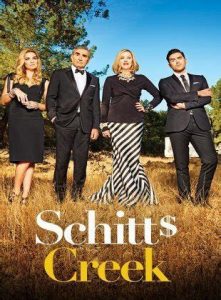 The premise of an extremely wealthy family losing their wealth and going to live in a small rural town, is silly. Schitt’s Creek essentially reverses the premise of the popular CBS comedy The Beverly Hillbillies, by replacing that show’s iconic grandmother character with O’Hara’s eccentric wife and mother and two adult kids as unlikely to launch as Elly Mae and Jethro. You can get a sense of Schitt’s Creek from the name of one of its main characters, who also happens to be the town’s mayor, Roland Schitt (Chris Elliott). I think I laughed out loud during almost every episode of the entire series.

With an affected, gay son (Dan Levy) and a dim, shallow daughter (Annie Murphy), the married couple played by Levy and O’Hara anchor the series. O’Hara steals every scene as a vain actress. Eugene Levy plays it straight. These comedians, whose enduring careers trace back together to films and Chicago’s Second City comedy troupe and television program, provide hilarious material, bits and performances. Levy’s real life son and daughter have a hand in both production and regularly starring roles.

Capitalism is Schitt’s Creek’s central plot springboard. It’s what powers the series, which has the sign of the dollar in the title. Each character requires capitalism to mine humor and make progress. For example, the husband and father makes a long, slow and steady comeback from being a former video store businessman thrust into impoverishment to mentoring an associate who studies, learns from and mirrors his money-making skills.

Schitt’s Creek’s climax comes, too, with a capitalistic venture. An apothecary, born of the son’s desire to break free from the pack, sets forth a new vision of his own making, rejuvenating the whole town and becoming a catalyst for his romantic breakthrough. In fact, the romantic subplot involving the son, poignantly and memorably rendered with a recurring cover of Tina Turner‘s “Simply the Best”, yields the upward arc toward the finale.

The actress playing the daughter, Annie Murphy, is very good. She provides Schitt’s Creek’s best dramatic acting. Each of the performances is excellent. As the completely ridiculous mother, O’Hara caps everything with dry wit and a touch of madness. From her pronunciations and incongruous vocabulary to her blinding, glittering wardrobe of feathers and glitz, O’Hara’s neurotic wife and mother character elicits the most laughs.

Each character strives to make money doing work she or he loves. This is the heart and soul of Schitt’s Creek. It’s what distinguishes and differentiates the show from today’s chronic contempt for capitalism and pervasive, predominant comedies infused with absurdism, anti-heroism and cynical vulgarity.

In this sense, Schitt’s Creek — silly as it is — is one of a small number of television comedies during the past 70 years that makes audiences laugh without sniveling at the universe, civilization and the best of humanity.

Schitt’s Creek belongs in the same general category as Father Knows Best, The Donna Reed Show,, Leave it to Beaver, the Adventures of Ozzie and Harriet, The Jeffersons, My Three Sons, The Dick Van Dyke Show, The Golden Girls, Frasier, and Modern Family in depicting the American family as a joyful and enterprising source for fostering the happy, romantic and idealistic — and distinctly American — life.