Though I doubt I’ve seen most of his motion pictures, I know that Sean Connery, who died in the Bahamas at the age of 90, is a great actor, activist and movie star. As I’ve observed about the late Chadwick Boseman and Mary Tyler Moore, I think it’s unfortunate that this actor of ability is primarily associated with a single character, which he memorably played in a series of popular but generally mindless franchise films. If there’s to be a future for motion picture art and science, I think Mr. Connery will ultimately be remembered for his small gestures and intimate performances.

Unfortunately, the future looks grim. The British Broadcasting Corporation (BBC) failed to mention the name of the artist who created the iconic character for which Sean Connery is primarily remembered. The writer’s name is Ian Fleming. Instead, the BBC’s obituary chides the old films in the franchise by judging them by post-Me, Too movement standards. Worse, because the source ought to be more credible and reliable, Turner Classic Movies (TCM) wrongly describes Sean Connery as an “Oscar Winner” in a social media post linking to an obituary in the barely credible trade publication Variety. Never mind that he was an actor, activist and movie star—all of which are more essential to his life and career than winning an award.

It’s true that Sean Connery is best known for playing James Bond, a character created by British author Fleming, who like Sean Connery also lived on a tropical island close to America. His portrayal as Bond in the series’ first motion picture Dr. No in 1962 is excellent. But it is one of many great performances made distinct by the Scotsman — a self-made bodybuilder, truck driver and son of a cleaning woman who had served in the Navy — throughout a distinguished career.

The Bond movies, including Connery’s (Dr. No is the exception), were at best a joke. I contend that they are worse than that. On the whole, the popular commercial films damaged civilization and progress by minimizing the threat of totalitarianism. Mindless titillation trivializing extremely serious conflicts, values and issues makes it easier for Americans and other Westerners to become dolts, morons and pod people for pre-dictatorship, which is what Americans have become or are becoming. 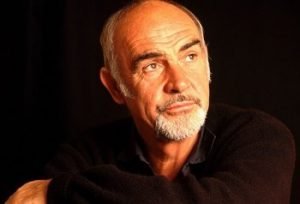 I shall remember Sean Connery instead for playing flawed men born in the wrong time, which is emblematic of great 20th century men. I find his roles in The Untouchables and as a rogue Steven Spielberg character’s father to be forgettable. I can’t recall a single quality about either character. But as a handsome and dashing adventurer, friend and man of passion in John Huston‘s 1975 epic The Man Who Would Be King (which would never be made today) — as Robin Hood in love with Audrey Hepburn’s Marian in a love story the following year (Robin and Marian) — or as various villains, criminals and con men in The Great Train Robbery, Marnie and Murder on the Orient Express (1974), magnificent Sean Connery captivated the audience and dominated the screen.

Mr. Connery was the best thing about the flat Finding Forrester. He was often the only compelling reason to sit through one of those boring bastardizations of Ian Fleming’s novels for the screen. He played Agamemnon in Time Bandits. He even made an impression in a small role in 1977’s war epic A Bridge Too Far based on the book by Cornelius Ryan. I remember him being excellent in 1990’s The Russia House based on the book by John le Carre and in an underrated and delightful caper movie titled Entrapment with Catherine Zeta Jones in 1999.

Perhaps his last great leading role, echoing his first major breakthrough role as an anti-Communist spy in Dr. No, is as a defector from Soviet Russia in the 1990 adaptation of Tom Clancy’s first novel The Hunt for Red October, a plodding affair made better by Alec Baldwin as the protagonist and Mr. Connery as a submarine commander determined to breathe free.

As a boy, I saw many Sean Connery movies during opening weeks in the movie theater. These are some of my earliest and happiest memories of seeing movies when Americans were at liberty to see movies, especially movies meant to be experienced as movies. Most memorable among the Sean Connery pictures I saw in theaters is an epic in 1975 by John Milius titled The Wind and the Lion. The score is sweeping. The pictures are majestic. It’s a flawed film. In retrospect, having seen the movie again after Black Tuesday with a friend who was raised in a predominantly Islamic country, The Wind and the Lion glamorizes Islam, jihad and Islamic terrorism through no fault of Sean Connery’s.

But his performance is breathtaking. Sean Connery is so committed to the quality of his performance as an ignorant but gallant savage who kidnaps an American woman and her children as prisoners in a holy war for Islam that he adds an element of mischief, danger and daring that elevates the movie.

Sean Connery was a movie star — he was a movie star at a time when movie stars were fading and being faded out — blanked out — vilified for being handsome, absolute and upright. He was also an activist and an outspoken advocate for political independence in his native Scotland. Contrary to the blather about his being the best Bond, an increasingly asinine and useless distinction, Sean Connery was foremost an actor of ability. With dark, manly confidence, seriousness and beauty, he gave Western audiences a glimpse of man, even when he’s lowdown, deficient and lacking, as he can and ought to be.