This NBC series stimulates thought. Yet it moves the audience to experience powerful emotions. Parenthood (2010 to 2015) accomplishes this through intricate and intelligent characterization playing to an overarching theme that parenting can and ought to be both rational and rewarding. 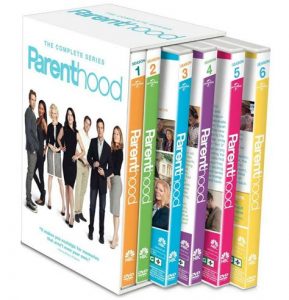 Buy the series on DVD

Family is not an end in itself, according to Parenthood. It’s a unit of unique individuals that exists primarily to serve as a rocket launch and refueling center. This is why a family can be integral to creating, making and forging the meaningful, purposeful, selfish life.

Parenthood, created and written by Jason Katims and based on the Nineties movie by Ron Howard (Frost/Nixon, Solo: A Star Wars Story, Apollo 13), essentially tells the tale of four children who choose to have children. Two sons and two daughters and their parents sputter, propel and revolve in multiple relationships, professional, romantic and otherwise. They do so with humor and poignancy in each of its six seasons.

These are the characters in the Braverman family, led by Bonnie Bedelia (Sordid Lives, Presumed Innocent) and Craig T. Nelson (Coach, Poltergeist) as the parents. Favorite son Adam (Peter Krause) is a buttoned-down establishmentarian; he lives to lead. Younger brother Crosby (Dax Shepard) is the free-spirited comic relief; he strives to achieve. Julia (Erika Christensen) is the perfectionist; she thrives on striking the ideal balance. Black sheep Sarah (Lauren Graham) is the single mother mess; she seeks to create and cash in.

Through her lens, the audience first sets sights upon this warm, intelligent and inviting family.

Bravermans are sharp, unpretentious and intellectual. They think about what they do before they “just do it”. They use words. They talk. They also listen. But these are depictions of humans that know how to communicate through verbal means. But they not only like communicating with each other—they thrive on it. They draw strength from it. They get powered by it. They refuel. This feeds the interplay that makes Parenthood go.

Bravermans think about how to love and raise a child, as well as how to tend to themselves. They are biting, flawed and competitive—in unhealthy and healthy ways—and they can be bitches and brats behind one another’s backs. Like your family.

This is what makes Bravermans go and do. They go for the gold in life, even when there’s less and less time left to live, too much that’s been said in anger, or too much alcohol involved, or too few moments together in plain, honest talk. Mother and daughter, father and son, sibling rivalry—the pretty one, the smart one, the responsible one, the overindulged one—it’s all here wrapped inside a series of gilded parenting fables.

With a neat timeline tie-in which pre-dates its thematically similar cousin, NBC’s excellent This Is Us, Parenthood depicts the child in the family and the inner child within each parent. It shows how each among us must guide and parent the self and it shows how parenting is properly done.

The whole series is an enveloping, unfolding story of these Northern Californians (without the superiority complex) arcing toward a bittersweet resolution which reminds the viewer that life is finite, rich and breathtaking. But only if you choose to think first, put yourself first and go after what you want.

With baseball as a leitmotif, Parenthood’s is a distinctly American family orientation. Each Braverman works to play, plays to compete, competes as a whole person—playing more than one position—and each player aims for the grand slam. The show often hits and scores. But they are united.

This is family as it can and ought to be. Perhaps the one you’ve never had, always wanted, desperately miss, read about and long to have and hold.

Watch Parenthood for its fresh surprises. You’re likely to find yourself questioning and challenging your own ideas about parenting. The series depicts certain dilemmas, some that may be familiar and some that may not, that prompt you to think twice about your own upbringing, family and child rearing.

Whether it’s raising a kid with Asperger’s, starting over, fielding calls from police, making time for sex or parenting the child neglected for her ability, Parenthood covers it all. There’s a memorable call for help from a truck stop in Gilroy, marital strife and a son named Jabbar (Tyree Brown as the most honest and appealing child character).

There’s the kid that dyes her hair black, the dance audition, the hobbies, practices, rehearsals and nights climbing into windows and stumbling into sofas. There’s Craig T. Nelson hilariously memorizing and trying to remember why it’s important to invoke the line “I hear you and I see you”, the importance of getting credit and giving gratitude and saying ‘thank you’.

One of my favorite episodes occurs on Crosby’s houseboat. I like it because it dramatizes the character’s progression toward his choice to commit to being a parent. It is rare that any show tackles the abstraction of what Ayn Rand describes as man as a being of volitional consciousness.

Parenthood, filled with meaning, pathos and insight, does—from its theme that Crosby has the power to put what he loves up for sale by owner to how deftly it displays and honors the value of owning material possessions, whether a home or a piano. Other second season highlights include a character played by Michael B. Jordan (Black Panther) as an alcoholic, which dovetails into an ex-husband’s alcoholism and a daughter’s drug use.

But, whether it’s camping with Grandpa for the purpose of studying bugs at dawn, cancer, being fired, adoption or enduring Parenthood’s most irritating characters — Max, Adam and Kristina and controlling Jasmine — there’s always an organic reason for each plot point, each character arc and every plot twist. Even when Adam dresses like a rapper to get new business.

Flaws include that Sarah’s always apologizing, scenes don’t play out and overacting. Characters constantly talk over each other.

As the Bravermans’ family tale comes to a close, season five’s “Promises” episode is among Parenthood’s most profound. I’ll leave it at that. But know that this show presses every subplot into marvelous tales of redemption, letting go, dying, grieving, moving on and finding the goodness in each new day.

Ice skating with the kids—playing hooky to surf in the ocean—starting a school—opening a recording studio—running a political campaign—dating an Afghan war veteran—releasing the scream—coming out as gay—embracing moving day—leaving California—the meaning, memory and mining of road-tripping with Grandpa in a Pontiac GTO—meeting the other mother in Wyoming—accepting the marriage proposal—and, beautifully, leaving the 1972 Reggie Jackson baseball card in the rafters as a benevolent legacy for strangers, stressing the importance of chosen values over the importance of going merely by blood.

Enjoy Parenthood as a fully circular voyage of the child’s and parent’s—and grandparent’s—life. You will probably cry and laugh, often during the same episode. I did. But you almost assuredly will be provoked, if deftly and down to your core, to think.

The DVD’s deleted scenes often fill in gaps as important action sometimes happens offscreen; the extras’ flaws include a lack for original air date stamps and music that’s too folksy.