This is a memorial post about an actress and comedienne whose legacy should not be diminished, marginalized and misunderstood by the claim that what she accomplished helped others; in particular, women. This is the least of her achievements to me, anyway, and not only because I’m a man. Mary Tyler Moore was foremost an artist of impeccable ability, whose skills ranged from drama to dance in a variety of formats over decades.

This is a real achievement. Ms. Moore was not merely a type. She did not merely have “class”. She was not a feminist icon. She was singularly outstanding in the whole scope of her work, performing with everyone from playwright Neil Simon on stage and Robert Redford on 1980’s best movie, Ordinary People, to superstar Ben Vereen on TV and Elvis in his last motion picture. MTM played a cancer patient, a first lady, a housewife, a nun and a journalist. In a role I am sorry to have missed seeing her perform, she played the lead, a paraplegic who demands the right to die, on Broadway in Brian Clark’s thoughtful, moving Whose Life is it, Anyway? Like Steve Jobs, Michael Jordan and many great Americans of superior ability, Mary Tyler Moore, whatever her legendary success, tried, failed and flopped time and again. In so doing, she ran a company with her late ex-husband, Grant Tinker, and variously launched The Bob Newhart Show, David Letterman and Michael Keaton, among many other talented artists and wonderful shows. 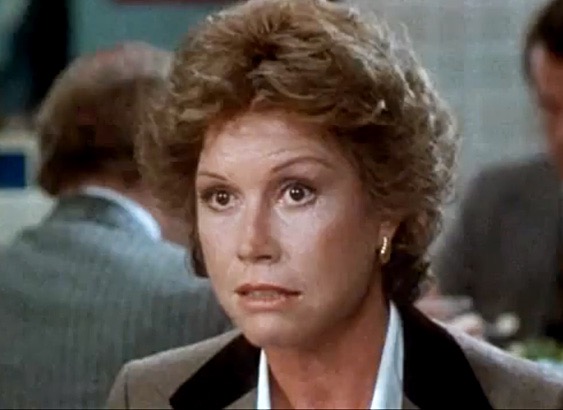 If you’ve read this far, you probably already know her career in three main acts: playing perky, modern housewife Laura Petrie on The Dick Van Dyke Show (1961-1966 on CBS), playing modern, liberated producer Mary Richards on The Mary Tyler Moore Show (1970-1977, also on CBS) and playing repressed, angry and obstinate wife and mother Beth Jarrett in Mr. Redford’s magnificent 1980 adaptation of Judith Guest’s novel about a fractured family on Chicago’s North Shore. That film is very personal for me, because it helped me sort through extreme confusion before I’d read Ayn Rand. As the villain, she was nurturing and nuanced, cleaning her home and fixing her broken family and simultaneously evading what tears it apart, exacerbating the fracture and worsening the sickness. It is an underappreciated film because its complex psychology is layered and multi-dimensional, so MTM’s Beth is neither a caricature nor is the ending distinctly happy or unhappy. Instead it ends on a cold, pink morning glimmer, which begins in earnest with the sound of a taxi door closing as her character makes a quiet exit that’s as liberating for the nuclear family as was her Mary Richards for the rational, productive woman.

This takes depth, courage and seriousness and Mary Tyler Moore pushed herself as an artist and made everything look easy, which she rarely gets credit for. Yes, her Mary at WJM was a serious-minded, goal-oriented career woman, not a catty social climber or golddigger, and she had friends of both sexes, all types and all ages. But Mary was also feminine, whether in smart slacks (not that any assistant producer at a third-rate station could have afforded those outfits) or evening gowns, and she tried new hairstyles, clothes and efforts to make herself attractive to men. Mary was private, not showy and ostentatious or self-centered. She was always interested, even if mildly, in what her friends and colleagues were doing, always from a distance and never sacrificing her own interests. And she really was interested in her friends and co-workers, not merely for the sake of ingratiating herself to them.

Mary put work first. As in her Dick Van Dyke role as her husband’s helpmate in those earlier five seasons, in her seven seasons as a professional broadcast news producer, Mary made an effort to make her productiveness matter; she strived to improve the broadcast. She made an effort to encourage colleagues. She wasn’t some insecure, neurotic freak constantly rambling on about what she did last night. She played tennis, dated younger and older men, kissed on the first date, struggled with ethics, stood on principle—Mary went to jail rather than reveal a source—examined her flaws, and took pride in her work. Certainly, she was attractive and relatable. But she was also willing to stand alone and be controversial; she never lived through others and Mary Richards was, in practice, neither a deranged hedonist like today’s TV characters nor a simpering altruist like many female characters of her time—Mary was an all-American egoist.

Personally, MTM’s life was full of tragedy, despair and passion. She’d been raised as a Catholic in Los Angeles, attending Immaculate Heart in Los Feliz, the daughter of an alcoholic who would be preceded in death by her siblings, one of whom she helped in assisted suicide when he became terminal, another whose death was ruled a suicide by drug overdose. MTM checked herself at one point into the Betty Ford Center for treatment of alcoholism. Her only son shot and killed himself with a sawed off shotgun in an act which was ruled an accident. Politically, MTM went from campaigning for a Democrat for president to watching Fox News and describing herself as a “libertarian centrist”. She believed animals have rights, supported embryonic stem cell and diabetes research and, though she once met with the pope, she married a doctor, who survives her.

I already own the whole MTM series on DVD (one of the few, besides The Twilight Zone and Frasier) and I’ve seen Ordinary People more times than I can count. In all the flops and misses, the best episodes, funniest lines and greatest roles and performances, from the newlywed in Danville or the sexy mom in Capri pants in New Rochelle to the corn-fed, Twin Cities single lady and dysfunction source in Lake Forest, Illinois, it turns out after all that Mary Tyler Moore could do it all—and, in reality, she did.