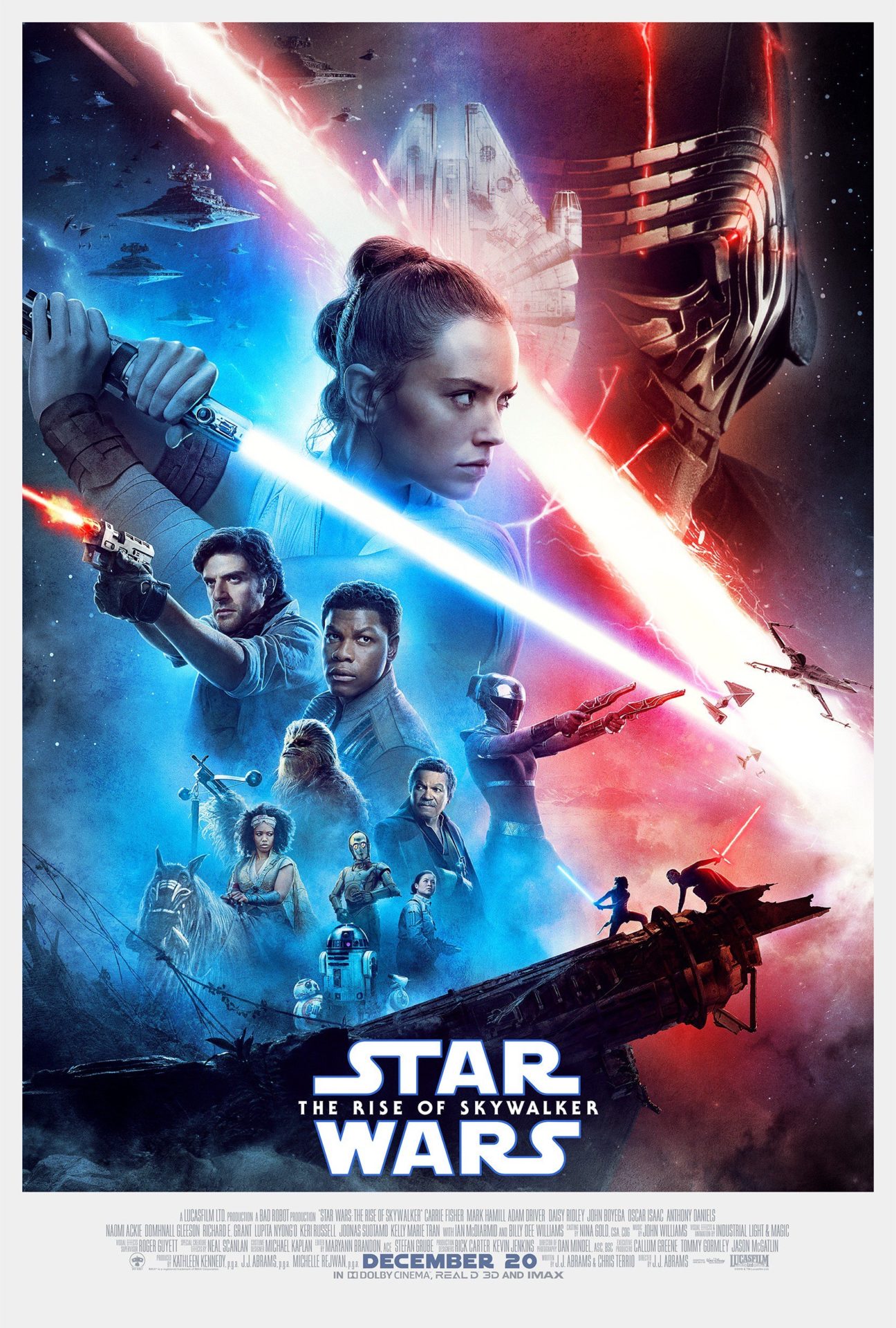 Starting with a bad title, ending with a causeless conclusion and leaving filler that climaxes too soon and accomplishes nothing of substance, the ninth episode of the saga drags, mugs, hams, flashes and limps to the end. What began as a fresh shot of idealism in the middle of a mythical movie series envisioned by George Lucas putters to an incoherently uninteresting ending with The Rise of Skywalker.

Abrams directs and Kennedy guides as Disney funds this mashup of mysticism and mainstreamed “social justice” pap. The problem’s not that Rey (Daisy Ridley) is a female protagonist with superpowers. The problem’s not even that the character is badly conceived, written and played, though, unfortunately, she is awful in every sense. The film’s flaw is fundamental; it exists to repeat an experience, not to dramatize a story, let alone a good story, let alone make the audience feel good and entertained, let alone provoke thought.

Diehards invested in 42 years of merchandising, including toys, discs and related memories, may be inclined to reject this view. I suspect, however, that they’ll be as fatigued as the boy who sat behind me. He started before the opening credits as a happy child and ended up drifting away in his father’s lap, bored, confused and, as far as I could tell, desperate to go home.

Billy Dee Williams, an outstanding actor, reprising his role as a cad, best sums up the spirit of the final Star Wars movie of the central Lucas series; he can hardly work up an interest and looks like he’d rather be anywhere else than this galaxy far, far away. Surprises, plot points and effects aside, the acting is almost universally flat, bad and sleep-inducing with the lines to match. Only Adam Driver, again as the villainous son of Leia Organa and Han Solo, stands out in every appearance. The less said about the late Carrie Fisher, as in The Last Jedi, reanimated, inserted and manipulated here in the same role she originated in 1977, the better. Her character, too, is backdated to become a Jedi knight she never was.

Ridley as Rey is pained, again, shifting looks between angry and hard or between light and caught by some magical, inexplicable feeling. The series’ religious Force, made more explicit and repetitious this time, dominates her character, engulfing Finn (John Boyega), who instructs someone that causeless “feelings” are paramount.

It is important that the audience understand that nothing is at stake in Star Wars: The Rise of Skywalker. Rey may be in the middle of a battle, or a duel, or a mission with Poe (Oscar Isaac) and Finn, and, suddenly, she may wander, usually looking angry, intent or puzzled. Rey may stand in the middle of an open space, furrowing her brow and staring into a void. Or she may go off on her own into a storm, you never know and you never know why. This happens over and over.

This is the theme of what’s become of the George Lucas Star Wars; that one must go by “feelings”, not facts. That one must act on whim, never go by reason, and that good may or may not result but, in any case, the individual must subordinate the ego and rationality to faith, religion and whatever capricious “destiny” results. Time and again, each major character, even ghosts (Rise of Skywalker is loaded with ghosts), submits to the void.

For example, Poe, the closest to a voice of reason in the final trilogy, who was emasculated last time after a decent start in The Force Awakens, rises briefly in stature to regain his efficacious ability only to be reduced, really wiped, in the climactic battle. It’s not enough that he’s dead wrong (is this character right about anything?); Poe has to be deflated in being dead wrong and literally give up and renounce his earlier self-confidence. Only then is he “redeemed” by the universe or whatever’s believed to be outside of one’s self, like an Obama or McCain speech badly dramatized.

The Disney/Lucasfilm/Kathleen Kennedy left’s religion of irrationalism, i.e., feminism, multiculturalism, etc., trumps all with appallingly condescending plot points. Female minimizes male. Blacks pair with (and are saved by) blacks. Gays are gay only for an instant and only if they’re … female, of course. Females are omnipotent. Males are not; men are dolts. Humor almost always comes at the male’s expense.

I kept waiting for Yoda to have a cameo and announce that he’s transitioning. One major series character, who was once a candidate for the series’ hero, dismisses his entire life in two seconds with a line that he was wrong about nearly everything. Another male character, Finn, admits his incompetence at an important plot point; when asked what to do next during a military operation, he admits: “I have no idea [so] follow me.” This is intended as humor, though the boy behind me wasn’t laughing, and soon the child put several questions to his father, who told him to hush.

Finn’s line is telling. It shows that Star Wars inversion from 1977’s can-do Americanism to blank Nineties reboot and post-9/11 tribalism is complete. It falls to Finn, the flattest, blankest character, a former stormtrooper who the audience was once led to believe fell in love with the heroine, to pronounce the 42-year-old series’ edict, which looms over and dominates our culture: “[go by] instinct, feeling, the Force … I don’t know how [to think].”

Finn’s profession of ignorance stems from his fixation on cipher Rey, the ultimate whim-worshipper and magical mystic whose causeless actions invariably lead to mass death and destruction. I wish I could say as I have in previous series reviews that all of this is mitigated by enjoyable moments and effects. But almost everything is bad. Star destroyers appear in such volume as to be distracting and preposterous, even for a preachy, mystical soap opera disguised as a gussied up fantasy in outer space. Wildly undulating storm waves the size of a county go calm in an instant for no reason.

Frankly, the most entertaining moments involve the Emperor (Ian McDiarmid), whose scenes and lines are pure cheese and crackers. They drip with melodrama to the point, with logic and reason the province here of the villains, that I was almost rooting for him and his Easter Island-like carvings, faceless band of Sith Lords and legions of assembled, cloaked believers.

It’s as if this section of Rise of Skywalker is a tribute to those B movies in which you find out that the whole town’s populated by worshippers of the devil, who then encircle and seek to sacrifice a screaming virgin until the handsome, dashing hero comes in to save her.

Today’s anti-sex “social justice” activists and makers of movies by commandment need not fear being “triggered”, however. This movie like its recent predecessors is celibate and sexless. Handsome, dashing heroes are, like Song of the South, smoking, sex, guns and egoism and other imagined Disney movie outrages and injustices, purged from Star Wars.

Rise of Skywalker (like Marvel’s movies) does not entertain. Apparently, it fails to entertain the boy behind me who, in two hours, went from happy anticipation to sad disappointment.