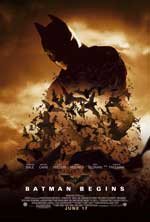 Warner Brothers’ newest Batman begins his quest for justice with skill, style and something radically different from today’s movies: a plot. Remember one of those?

Retaining the comic book series’ darkness, the movie, which bears no relation to the studio’s previous Batman blockbusters, is based on a story by David S. Goyer, who co-wrote the script with director Christopher Nolan. Batman Begins is about a man who chooses to become an avenger, a businessman and a hero.

Peeling back Batman’s legend in layers, Nolan shows that Wayne was once a carefree child (Gus Lewis), with a servant’s daughter as his playmate, and with the family butler, Alfred (Michael Caine), as his guardian following the murder of his father and mother, which he witnessed. He is last seen as a pale boy clutching Alfred in pain, guilt and fear, destined to become a man of his own making.

Faced with a choice between good and evil, he could go either way. Returning to the present, Liam Neeson takes over as an eastern mystic, complete with Fu Manchu facial hair, playing on Wayne’s desire for vengeance and drawing the troubled youth into a monastic order of vigilantism. If it sounds serious, it is—which is why it is good. This is Batman with a brain.

Nolan shows the story out of sequence, in flashbacks, but never out of order, bringing Wayne back to Gotham City, where he was raised. Visually, the place is stunning. A monorail created by his father (Linus Roache) glides through the modern metropolis and a tower emblazoned with the Wayne name stands in the city’s center. But Gotham, marred by crime and poverty, is slowly choking in the grip of a mob boss (Tom Wilkinson) and his sadistic accomplice (Cillian Murphy). Wilkinson delivers a perfect pitch, casually comparing lawlessness to leftovers in the fridge with the line that “sometimes, things just go bad.”

But Bruce Wayne proves otherwise, choosing to think, study and become a hero. Faking a playboy persona to fool the public, he applies for a science job at Wayne Enterprises, just as an unseen syndicate poses an imminent, catastrophic danger to Gotham City. Nolan allows the anticipation to rise slowly, placing symbolic figures—a boy, a bum, an old man—along the way. All the bat stuff is included in the climax—the car, the helmet, the sky signal—made more exciting with each tool’s origins explained. With Gotham City on the verge of destruction, Batman orchestrates a symphony of outnumbered idealists to restore Gotham to its previous glory.

Despite a tendency to mutter, Christian Bale is convincing in the lead. Gary Oldman is solid as an honest policeman named Gordon. Besides Messrs. Caine and Neeson, Morgan Freeman as a Bond-ish agent Q type and Rutger Hauer as a Wayne executive shine, too. They all make perky Katie Holmes as an assistant D.A. look as though she’s auditioning for a pep rally. While chastising the worthless playboy Wayne, it’s she who delivers the movie’s theme that one’s character is the sum of one’s actions, not an original moral but better than a superhero who bumps into walls.

From his first black-winged appearance, when Batman swoops down on corruption at the city’s docks—a nod to Elia Kazan’s On the Waterfront, with Holmes in the Eva Marie Saint role—to his final, ballet-like bow, Batman possesses the will to bring ideas into action. He takes flight with gallantry, grace and a sense of honor.

The sound is loud, the fight choreography is inhibited by cuts, and an early act of Bruce Wayne’s compassion actually causes Gotham’s demise. But Nolan brings a noble purpose to the Batcave—one that is especially relevant today: the idea that, sometimes, something must be demolished in order to be saved. As one character says, after a favorite entity is destroyed: Rebuild it exactly as it was, only better, which might be said of what Batman Begins does with the 1939 comic book character who turns fear into a weapon for justice.

DVD Notes
The best part of Warner Bros.’ deluxe double disc DVD for Batman Begins is the movie, of course, which is hypnotic in this format. The score booms from the speakers and sets the dark tone of a well-told story—by David S. Goyer—and it is no less involving.

Disc two features a bat in the upper right hand corner. Its wings go forward (right wing) and backward (left wing), and the package contains one of those enigmatic interfaces that apparently appeals to people who like to spend their time clicking on buttons. It would have been nice to include a ‘skip’ feature where one could go straight to a menu of clear options.

The choices are pretty neat, with over eight extras, including bits on Gotham City’s miniatures, Batman tools, tricks and background, sprinkled generously with appearances by the articulate Goyer and co-writer and director Christopher Nolan, whose intensity more than compensates for the lack of an audio commentary. Another bonus—honestly, you don’t have to be a prince of darkness to appreciate the purposeful theatricality of this Batman—is the DC Comics booklet which accompanies the discs (a full-color, glossy paperback).

Separated in three parts—referred to as “stories that inspired the movie”—this comic book/graphic novel tie-in has Bruce Wayne variously in a May 1939 comic strip, when he was known as the Bat-Man, a less than refined, anime-type thread that takes up most of the pages, and the first series, The Man Who Falls, which reads well, though it’s hard to accept that Bruce Wayne’s father would call him an idiot. In this version, young Wayne enlists in the FBI, where “he stayed for exactly six weeks. During that time, he’d learned much about writing reports, obeying regulations, analyzing statistics and dressing neatly…and nothing else.”

Thirty dollars (list price: $30.98) seems a bit much to ask, but for those willing to pay, it is good to have a single-minded hero for whom justice is a passionate cause, not a side-winding wisecrack.