Gifted starring Chris Evans (Captain America) is foremost a movie about people of ability. This differentiates Gifted from most child-themed movies. The kid that plays the girl, McKenna Grace, is not precocious. In fact, the actress is very good in the role, with a sharp tongue that reminds me of a younger Quinn Cummings (Family, The Goodbye Girl) and, directed by Marc Webb (The Amazing Spider-Man) working with Tom Flynn’s screenplay, hitting every mark without trying too hard or coming off like she’s a miniature 36-year-old. Gifted is better at dramatizing the psychology of guiding a life, and parenting a child, than it is at portraying philosophy in action. 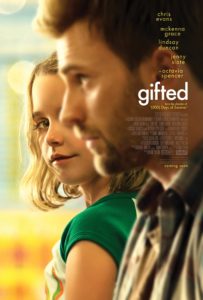 Reuniting with his Snowpiercer co-star, Octavia Spencer (Black or White, Hidden Figures), Evans essentially plays himself; the likable, good-looking, sensitive, strong and silent type who does the right thing for the right reasons and does so without bravado. Here, he plays Frank, who’s raising his suicidal sister’s kid in a Florida home rented from Spencer’s character. He fixes boats, steps on Lego pieces and tries to protect the girl from whatever hard-boiled family secrets and mysteries linger in the past, which the audience knows they’re going to learn as this chipper, bright Fox Searchlight movie rolls along. Learn the audience does, with an elementary schoolteacher (Jenny Slate, who voiced Bellwether in Zootopia) pushing for answers to the puzzle of this exceptionally bright child, and a granny up north in Boston (Lindsay Duncan, Alice in Wonderland and Alice Through the Looking Glass) who wants the best.

That secrets pit mother against son comes as no big surprise. The folksy wisdom is too pat, a false dichotomy underpins the plot’s conflict and a custody courtroom speech comes out of left field (even though it’s true, despite what the filmmakers may think). But the script’s sincerity wins you over in what plays as a kind of antidote to the Whiplash theme that being the best means pushing harder. With biting lines about bearded academics, porn producers and saying things we don’t always mean, Gifted, which unequivocally embraces making value-judgments for being one’s best, manages to be both thoughtful and moving (with help from a cat named Fred). Like Jon Turteltaub’s Phenomenon, Gifted gives being the best and brightest its due, dramatizing the tradeoff, too. And, while it doesn’t quite achieve the balance or serenity it seeks to showcase, it depicts that as the proper goal.