A simple American story about a man and the work and woman he loves makes director Sam Wood’s biopic, authorized by Chicago White Sox pitcher Monty Stratton, a compelling and inspiring motion picture. 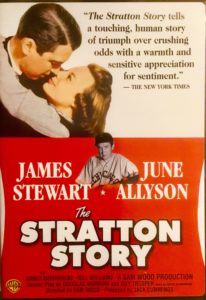 The Stratton Story, co-starring June Allyson and James Stewart and directed by Wood (and coincidentally released in the year he was robbed and his mother threatened with death at his Los Angeles home) is an economical hour and 40 plus minutes of Monty Stratton’s remarkable true life tale.

With Frank Morgan (High Noon, The Wizard of Oz) as an alcoholic hobo riding the rails when he’s knocked awake by a baseball bouncing around a boxcar during a stop in Wagner, Texas, Stratton’s story of going from cotton farm boy — with his starched mother (Agnes Moorehead) looking after meal preparation — to one of baseball’s greatest pitchers takes shape.

Before the down and out hobo persuades the small town athlete to hitchhike to Southern California, where the legendary White Sox train for the season, Stratton (Stewart in a layered performance) meets Allyson’s feisty young Ethel from Omaha.

If The Stratton Story sounds cliched, it is. But this doesn’t mean it’s not also terribly involving. Before the time of egalitarian scoreless games or the domination of gladiator-style brutishness in sports, baseball in America was scouted by coaches and men who were skeptical and discriminating and not always in the best sense. In The Stratton Story, which went on to win an Oscar for screenwriting, Wood manages to depict that discerning Ethel first falls for her man for his sense of decency—that success doesn’t come easily—and, in particular, that Monty Stratton was guided by a sense of pride in his work, ability and achievements, not by a sense of entitlement.

As Barney, Frank Morgan conveys similar characteristics to The Fountainhead’s mentoring architect Henry Cameron (released in the same year). As Stratton, who’s winning at life both by pitching no-hitters and by being in love with his own wife, Stewart captures with physicality, timing and facial expressions the baseball player’s sense of joy and intelligence. Going up against great athletes such as Lou Gehrig and Joe DiMaggio, he explicitly names his self-made pitching strategy: “You gotta outthink ‘em.”

The Texas hunting accident that changes Stratton’s career would’ve been turned into a politicized joke, tract or propaganda in today’s post-Dick Cheney, present-day Me, Too era. In 1949, however, it’s the climax of the tall athlete’s triumph of a pitcher, husband and father who refuses to be defeated. Of course, he has some help from his chosen friends, including the recovering drunk, the stern mother and his loyal woman, who adapts and adjusts to play catcher to help him regain his footing.

Even his hounddog Happy helps. All of this is to say that The Stratton Story is for when you want to see and hear the truth about an American self-made man shown straight, clear and upright.

It’s sad that this picture turned out to be one of the last by director Wood, who died of a heart attack in 1949 after being active in Hollywood’s anti-Communist Motion Picture Association for the Preservation of American Ideals which included John Ford, Barbara Stanwyck, Cecil B. DeMille, Walt Disney and Ayn Rand, who wrote for the group a Screen Guide for Americans. At least The Stratton Story, which contains not a hint of religion and, in the end credits, expresses gratitude for “… everyone in baseball — the executives, baseball clubs, players, and especially Marty Stratton’s old team, the Chicago White Sox — for their generous and wholehearted cooperation” also turned out to be one of Wood’s best movies.

This article originally appeared on The New Romanticist.