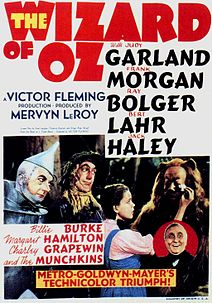 This beloved movie, which I watched at Grauman’s Chinese Theatre (now re-named TCL’s Chinese) in Hollywood where it premiered, still puts a hush over a thousand moviegoers. People laugh where they ought to laugh, are moved when they should be moved, and whatever one thinks of this strange musical fantasy with its coming of age plot, The Wizard of Oz is powerful storytelling in visual art form. The picture, which is being revived by Warner Bros. for a new home video product with a one-week theatrical release in IMAX 3D, is deep, rich and complex.

The tale of a young Midwestern child named Dorothy Gale (Judy Garland at her best) and her dog Toto is layered with psychological conflict and resolution. From the time the hysterical, searching girl goes down a path at the start of the black and white film – by herself, alone in every sense except for her furry companion, whom she is trying to save from death – to the time she meets an adult male carnival stranger as a teenaged runaway, it is clear that there are reasons why this picture retains its relevance. It can’t be reduced to a bunch of silly scenes, songs and costumes as its detractors claim and it’s not just weird, scary flying monkeys either, though it is unusual, silly and mixed with this and that, some of it superfluous and unnecessary.

I gain new insights with each viewing and The Wizard of Oz resonates. The story, made from stories written by an early 20th century Midwestern writer named L. Frank Baum, begins with Dorothy as a child who’s struggling to find her place in the world. The camera holds on a shot of her face when her aunt Emily (tough old Christian farm woman “Auntie Em”) betrays her and lets Dorothy’s dog be taken away to be “destroyed” by the evil town power-luster Gulch (Margaret Hamilton in an exquisite performance). So Dorothy learns straightaway that being a “good Christian” means surrendering to injustice.

But that dog and her love for it – she is Toto’s master and she consistently acts to gain and keep the dog as one of her highest values – is the center of the movie. Toto represents her innocence – he repays her at every turn, consistently and intelligently being a good and loyal dog to Dorothy – and Dorothy isn’t having any of her aunt’s Christian compliance while at the same time she isn’t going down the road to cynicism, either.

That’s where the three wise men – Hunk, Zeke and Hickory – come in. See, Dorothy likes men. She likes being around them. She isn’t afraid of them (she’s afraid and rightly so of an old maid). She likes talking with men about work, life and ideas. The Wizard of Oz doesn’t show all that exactly but it’s there, embedded in her actions, taking risks and falling into a pig sty, asking questions and pleading for justice. Dorothy’s a new type of female: she thinks for herself, neither sacrificing her femininity for intelligence or vice versa. She’s not a mean old witch and she’s not a crusty old matron. She’s her own woman, well, she’s about to become one anyway, as she’s swept up into a tornado that triggers a fantasy in the land of Oz. As Glinda the Good Witch says when she enunciates the movie’s theme, Dorothy’s got to “learn for herself.” And, just in case anyone mistakes Dorothy as a means to the ends of others, Glinda (toward the end) repeats two crucial words and instructs the men gathered around that Dorothy acts for herself. Unlike the Wicked Witch and Auntie Em who act to a large extent for the sake of others.

Sure, there are many fine life lessons here in song and colorful pictures and characters – the Tin Man (Jack Haley), Lion (Bert Lahr) and Scarecrow (Ray Bolger, in a brilliant performance) – including what it means to make a home, and it’s not the blood of family, teamwork and, above all, acting in recognition of and alignment with what’s real, true and just, as the old Midwestern wizard himself (Frank Morgan) memorably points out. As Dorothy teams in grand, imaginary Oz with her fellow men one by one, facing grave physical danger at every other step, she holds on to her innocence, intelligence (“then how do you know there is [a wizard]?” she wants to know) and her intransigent sense of outrage against injustice, which persistently leads to good.

Among pivotal characters in Oz, only Glinda the Good Witch has no counterpart in Kansas, serving as a mother/adult proxy for Dorothy’s ego, leaving no mistaking this Wizard of Oz, directed by Victor Fleming (who directed the magnificent and grand Gone With the Wind), for anything vapid and silly and bereft of nothing less than empowerment of the individual with a rational mind.

“Why, don’t you see?” says the Scarecrow at a climactic – and poetic – point in the picture. “[Toto’s] come to take us to Doro-thy.” Such small touches and moments may obscure the movie’s deeper representations and themes, such as evil goosestepping guards (who unfortunately change allegiances too quickly when the time comes) but they’re there, the serious, meaningful and profound, including Judy Garland’s unforgettable rendition of the song “Over the Rainbow” and intonations that “there’s no place like home”.

It’s true that there are Munchkins and poppies and other flights of fancy, especially delightful tunes. Yet each serves a purpose in its own way to unfurl the complicated world a girl – or boy – lives in and it’s still very much like our own. There are monsters that do terrible things to us – there are more of them every day and, they, too, live in castles with goosetepping guards and flying goons – and Dorothy and the kind, intelligent, sensitive men with whom she bonds are the perfect foil for them. And – I have to say it because it’s true – her little dog, too.