United Artists’ High Noon (1952) is a lightning rod of controversy. This compelling movie was made with the best talents and its taut, purpose-driven plot gains and keeps attention. Any honest appraisal must account for its flaws, too. I recently saw it again at the Autry Museum of the American West, where the movie will be discussed in a program next year comparing the classic Western to what’s become known as the Hollywood blacklist.

The picture’s timely connection to a congressional campaign purporting to be against Communist influence in Hollywood pertains to its downside. High Noon has a stagy, stiff quality that feels pedantic, forced and overproduced. In that sense, like Gary Cooper’s film for Warner Bros., The Fountainhead (1949), it’s too obviously delivering a message. Part of the problem is the age difference between Cooper as Hadleyville’s marshal Will Kane and Grace Kelly (Rear Window) as his deeply religious bride. And this problem feeds off the plot’s need to make the marshal more like a prop than a fully developed character.

On its own terms, however, High Noon engages to a degree. Marshal and Mrs. Kane flee from an evildoer on their wedding day—as the married couple does in Oklahoma!, also directed by Fred Zinnemann (From Here to Eternity, A Man for All Seasons, The Nun’s Story)—though they are not forced to do so and this, in particular, is a crucial distinction. To his credit, the marshal has retired his badge and job by the time he turns tail and gallops with his blonde young bride and, though he changes his mind, he later changes it again after putting the badge back on and decides to flee from harm. This is important because it shows that the lawman is conflicted.

So, infamously, is the town of Hadleyville. But the audience is supposed to morally judge them, and not him, for being conflicted. This while the marshal eventually, strictly and stubbornly out of a sense of duty carries out his mission to confront the evildoer coming in on the noontime train. Add a constant tick-tock clock and a song sung by Tex Ritter, with Dimitri Tiomkin’s Oscar-winning score, complex and interesting supporting roles and High Noon holds interest. As allegory for what the writer apparently considers an unjust anti-Communist hunt, High Noon does not hold up. 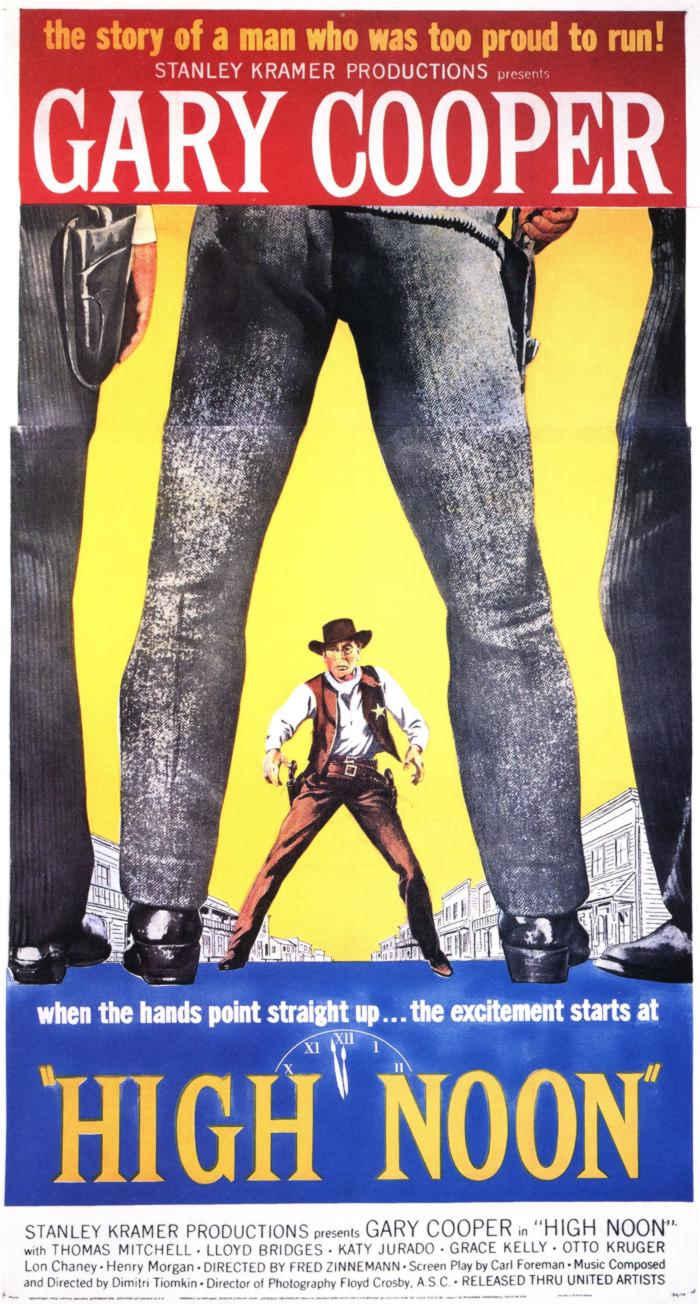 See the movie and judge for yourself. What works as moral dilemma is what drains and undercuts the allegorical warning. This explains why High Noon, first offered to John Wayne (who rejected the leading role) and held up by leftists and those who condemn anyone (such as director Elia Kazan, A Tree Grows in Brooklyn, Viva Zapata!, On the Waterfront) who named Communists (such as High Noon‘s credited screenwriter, Carl Foreman) in the HUAC hearings, gets praised and claimed across the political spectrum. The movie is mixed.

No one scene explicitly captures this more than the speech in church by the morally gray, rotten character played by Thomas Mitchell, who basically endorses pragmatism (speaking of timely political references) as the reason for denying a defense of the town, on the grounds that protecting Hadleyville from thugs jeopardizes government handouts. This from a character who says he admires Will Kane and rightly demands that Will Kane be heard in his plea for help, that the hearing be civil and that the townspeople do, in fact, contrary to some claims, constitute the whole town.

“This is our town,” pleads Mitchell’s character and then he proceeds to make the case for abandoning its defense and appeasing its enemies (speaking of timely political references again). It’s not surprising that the mixed, pragmatic philosophy of this movie, chosen by the Autry’s members as the audience favorite in 2016’s Western film series, dominates today’s culture, politics and foreign policy; anyone on the left, right or in the middle can justifiably project himself onto the Will Kane character. High Noon was apparently one of Ronald Reagan’s favorite movies yet Bill Clinton showed it in the White House numerous times.

What decent person wouldn’t want to see himself as the crusading hero seeking to render justice in a “dirty little village in the middle of nowhere” (starting with a lonely train station as in 1955’s Bad Day at Black Rock) as Katy Jurado’s Mexican character puts it? With producer and director Stanley Kramer (Judgment at Nuremberg, Guess Who’s Coming to Dinner, Inherit the Wind) producing and said to be heavily involved with the filmmaking, how could High Noon not end up being serious, topical and absorbing? The cast of characters, though there are too many and they say too much, are a fascinating assortment of profiles in cowardice.

As evil men gather over the movie’s signature song at the start, church bells ring and religion comes off as the antidote selected by the townspeople to deal with whatever’s wrong with the world. They dread facing the truth, and, while the voice of reason is also a voice for pragmatism, he gathers and rallies the town in a church, where the parson, all but ceding that sermonizing offers no real, practical value here on earth, fully abdicates religion as a philosophy. Hadleyville’s lone intellectual, the judge who marries Will and Amy Kane, cites 5th century BC history and the fact that he’d previously fled a similarly challenged town called Indian Falls as he packs up and folds an American flag to get out of town. Lloyd Bridges’ deputy marshal sees himself as a victim who knows on some level that he lives through others. An innkeeper (who today would be a vocal proponent of Donald Trump) is more explicit in stating that the ends justify the means.

In this sense, Hadleyville’s a stand-in for America and its religion is pragmatism and High Noon certainly rings true in this regard, down to the fact that the whole place’s days are numbered. To this point, the Battle Hymn of the Republic plays in the climax as the clock ticks, emphasizing that the town’s doom comes closer while the town prays away precious seconds. While Gary Cooper’s Will Kane runs around town pleading for help against the four monsters about to strike, a character played by Harry Morgan hides, making the town’s cowardice more explicit, in case the audience misses the point. Someone asks: “How do we know that [the villain] is on the train?” Someone asserts that “it’s not our jobs” to protect the town. Even Will Kane’s mentor, an arthritic, old man, opposes confronting the thugs, telling him: “It’s all for nothing.”

But why would a hero go to enlist an old man in the first place? This is the problem with High Noon, which contradicts Kane’s heroism at every turn.

Whether he’s riding out of town after retiring his badge—and he was uncertain and unsteady in both decisions from the start—Will Kane can’t seem to stand on his own and decide what’s right. On one hand, with a town so undeserving—and you learn how thugs came to rule as the town’s lousy characters come along—it’s easy to see why the former marshal doesn’t want to go it alone. It’s hardly worth the effort as the town’s already half-dead. As the Tex Ritter song, “Do Not Forsake Me, My Darling” plays as a taunt in the saloon, it’s as though Will Kane goes door to door taunting himself, doubting whether he does have a moral duty to save a town that won’t defend itself (he doesn’t), casting himself adrift wherever he goes. When his ex-deputy (Bridges) asks Kane “Why?” Kane answers: “I don’t know.”

Yet when Katy Jurado’s morally ambiguous character—depicted as decent but remember she’s been the hero’s and the villain’s leading lady—proclaims that “when [Kane] dies, this town dies, too,” what’s the evidence that the town’s worth saving, or that the man who’d risk dying for a town that isn’t worth saving is any kind of hero? Will Kane takes his final steps past the offices of Julius Weber, the watchmaker, reasserting the theme that civilization is running out of time, closeups come in a cluster when the clock strikes noon and, as the camera pulls back making Cooper’s Kane smaller and smaller, it’s clear that he’s puny. And he’s alone.

Or is he? This is High Noon‘s final deceit, and, in its resolution, High Noon sort of justifies every pragmatic argument anyone in town’s ever made. You can have your cake and eat it, too, this classic movie aims to say, with Howard Hawks and John Wayne teaming for 1959’s underrated and emotionally superior counter-argument, Rio Bravo, several years later. The evidence that this picture won the audience is strong. Look around, down to who rules the day, and mark High Noon as an artful example of anti-heroism that dominates and influences in fiction and in fact.