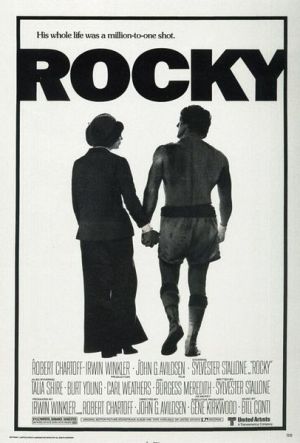 Pictures of man in motion, discipline and hero worship lift Sylvester Stallone’s Rocky to fulfillment of its theme. Screened at Sid Grauman’s Chinese Theater for a 40th anniversary showing featuring an interview with co-star Talia Shire (read my thoughts on the interview after this review) at the TCM Classic Film Festival 2016 on Hollywood Boulevard, Rocky inspires the audience. The 1976 motion picture is intimate, like 1955’s Marty with Ernest Borgnine, small and naturalistic, not romanticist in the highest sense. Yet Mr. Stallone’s low budget, independent-type United Artists movie, like 1993’s Rudy with Sean Astin, depicts with brains and vigor a mythical figure: the self-made sportsman.

Having never seen Rocky, or its sequels, I was well aware of its reputation, lines and movie star. TCM’s guide, too, describes it as a boxing movie, which doesn’t capture its essence. “Yo, Adrian” came to be mocked for some reason I never understood. So did Rocky‘s success; the character’s, the movie’s and the film series’. When Sylvester Stallone was talked up for a supporting actor Oscar this year, I correctly guessed that he would not win, though I knew that Rocky is the role for which the movie star staked his career and fortune.

When Rocky appeared on TCM’s schedule, I looked forward to finally seeing this seminal movie 40 years after it was made. Now that I’ve seen it, a lot of the hype and backlash makes sense. Though it’s a sports movie, Rocky’s more like a Western in some ways; the hero is an individualist who takes ownership of his domain. He is solitary. He has no family. Rocky rides alone. In this sense, Rocky is perfect for 1976, when feminism began to erode man-woman relationships, leading to emasculation of the American male. Rocky acts like a cowboy—like an American—like a man. Rocky doesn’t choose someone conventional. He picks his partner based on what he sees in her. He wants her. He courts her, he asks for her and he earns, and takes, her. So I see now that reducing their relationship to “Yo, Adrian” is a smear against man as a heroic being.

I also see now that Rocky, directed by John Avildsen, is a great Philadelphia movie, like 1993’s Philadelphia and 1940’s The Philadelphia Story, and it’s not just about the scenery and the steps. More on that later.

Philadelphia’s cold, gritty grayness serves as the wet, dark depth from which Rocky Balboa (Mr. Stallone, magnificent in every scene) rises. In the film’s first part, Rocky faces reality. At 30 years old, with bulging muscles from boxing, sad, brown eyes and a habit of alcohol and cigarettes to ease his pain and possibly his guilt from working as a mobster, he’s on his way to becoming a thug and he knows it. Coming home to a poster of his hero, legendary boxer Rocky Marciano, Rocky Balboa looks at an old photo of himself as a boy, gazes into the mirror and ponders whether he is, as sour fans call him after an opening bout, a “bum.”

It’s a legitimate concern. But there’s evidence to the contrary, too. Besides sneaking an occasional smoke, nursing an occasional drink, losing an occasional match, there’s something else about Rocky, who walks the streets at night, knows everybody in the neighborhood, goes easy on his shakedown targets and has a fondness for turtles, goldfish and puppies. He’s a hero worshipper, with Marciano’s chiseled body as the god of Rocky’s home—as against the portrait of Jesus Christ hanging at the gym—he’s kind and intelligent, which everyone around seems to sense, know and like about him, and, deep down, Rocky Balboa takes pride in himself.

It’s in his walk, when he struts around dark corners, greeting neighbors. It’s in his trade, when he enters a pet shop and flirts with the cashier, in whom he sees a quality he values. It’s in his talk, when he singles out a tough girl and delivers a stern lesson in the importance of earning one’s reputation—Rocky‘s first crucial transition to an extraordinary tale of a self-made man. Rocky walks the girl around the ‘hood, taking the wayward youth on a journey back home, where she thanks him, having been unhinged from clannishness and at least for now restored to a natural, decent state of being an individual who’s capable of standing alone.

This is a small scene, seemingly innocuous, but it marks a critical moment of the man’s self-awareness. It’s as if Rocky realizes in giving that speech that he’s infected with the mind-body dichotomy, not practicing in reality what he preaches in theory, living by example to the opposite of what he instructs the street kid. By now, the audience knows that Rocky likes being alive—he teems with life and, even when he’s down, it’s because he’s sad about something unfulfilled, not in pity for himself—and his love for life is ready to be (re)born. The audience—and this is why the movie earned 1976’s top spot and won Best Picture—is in on the heroism; a picture of man, machine and bridge, carrying a train, car and athlete all in forward motion, gets it going. So, too, does Bill Conti’s epic score.

Soon, the inner conflict gets an outer conflict to match, with world heavyweight boxing champion Apollo Creed (Carl Weathers) looking for a new means to profit from his work. As Rocky is inwardly American, Creed is outwardly American, exploiting the Uncle Sam persona, the nation’s Bicentennial, even General Washington’s crossing the Delaware River, shamelessly engaging in greedy promotionalism and inviting Rocky Balboa to box for the championship title as a uniquely American match. Equally greedy for an opportunity to prove himself in the arena, Rocky accepts.

But, knowing he’s a man not a boy and beginning his realignment, Rocky persuades the pet shop cashier, whose name is Adrian (Talia Shire), to date, yielding another interesting character contrast. As Rocky has grown his body to the exclusion of developing his mind, Adrian has clearly done the opposite. Both are variations on the mind-body dichotomy; each embodies the disowned self—which both through mutual commitment choose to reclaim. He takes her ice skating, where she first sees him fail but not before she sees him try. The later scene in which he reaches up while she visits his home for the first time, taunting and tempting her with his sexuality, seals their gaps. This causes a problem for Rocky’s pal and Adrian’s brother/paternal figure Paulie (Burt Young), who faces his own transformation, and it’s game on.

Enter the old man, in this case a 76-year-old trainer named Mickey Goldmill played by the late Burgess Meredith, who, in one scene in which he pleads for the job and seeks to redeem himself for an earlier rejection of Rocky, masterfully begins the retraining even as he walks away. This is a beautifully shot scene in which both men accept reality, come to terms and trade. They do so in a handshake—not a fistbump—while the train keeps moving on. Training, too, keeps moving, as Rocky downs raw eggs for protein to promote muscle growth.

As he does, and this is why the remarkable Rocky is not really about boxing, Rocky gets better, Adrian gets better, life improves and the world opens. As Rocky trains, jogs, conditions, sweats and expends effort, the neighborhood literally comes to life, with Conti’s theme piping through as fires burn bright. Whomever wins, it’s dawn in America, at least in America’s first capital, as Rocky prepares to box Apollo. In fact, to paraphrase Vince Lombardi, it’s wanting to win that matters. In this sense, Rocky—who looks in the mirror and conducts one more essential reality check before the bout, explicitly naming terms to himself—wins by going the distance, letting himself learn by letting go of what he can’t control that remaking his life for his own sake is the highest reward.

By the end, he is bloody but unbowed, as William Ernest Henley wrote, and he is triumphant by thinking and acting on principle—observe his breakdown of the concept southpaw as proof that he grasps that his mind and body are one—and, come what may, there is his woman, wearing red in another key scene and similarly remade and rejuvenated. “Adrian!!” is both his final and first call in triumph.

Rocky goes out on top. 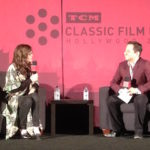 Shire, whose brother and Godfather director Francis Ford Coppola was honored at the festival with a handprint ceremony in the historic theater’s forecourt, repeated the legend of Mr. Stallone’s achievement: that Sylvester Stallone declined offers for his script, did not let his property go, and insisted that producers Irwin Winkler and Robert Chartoff cast him in the title role. Rocky‘s location shots were illegally directed without government permission, as is widely known, and the movie went on to win Oscar’s Best Picture and led to six sequels, including last year’s Creed, in which Mr. Stallone reprised his Rocky role.

Talia Shire recalled that Burgess Meredith set a good example for the cast and crew and was “full of creative joy.” Sylvester Stallone was, she said, “larger than life.” She added with reverence that he was “very sensitive” and was single-minded in his conviction that “something extraordinary was being made”.