Director Ron Howard’s Apollo 13 is like a big, historical reenactment with an all-star cast. Best viewed as a documentary-style chapter of America’s manned space program, it even starts like a documentary, with CBS anchorman Walter Cronkite covering Apollo 11 astronaut Neil Armstrong‘s first step on the moon on July 20, 1969. After introducing its astronaut characters at a party for the moon landing, the ill-fated 13th Apollo flight takes shape.

It is the summer of indiscriminate love, as Jefferson Airplane’s rock anthem on the radio suggests, and the Lovell’s are a part of its cultural opposite: an aristocracy of aeronautics devoted to flying spaceships. These are the Apollonian men of reason and Mr. Howard personifies them through astronaut Jim Lovell (Tom Hanks), who, loving science and life, represents man’s reach for the stars. When Neil Armstrong prepares to walk on the moon, Lovell calls out, “Kids!” while quiet fills the room (and the world) in anticipation of the first sight of man on the moon. 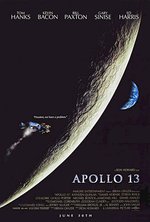 Later, when space veteran Lovell, slated for Apollo 14, moves up the roster for his own trip to the moon, his superstitious wife mutters about the number thirteen and he responds with a stern reproach: “It comes after twelve.” While the crew—Lovell, easygoing Fred Haise (Bill Paxton) and serious Ken Mattingly (Gary Sinise)—practices, a backup astronaut gets the measles, putting Mattingly at risk. NASA doesn’t want an active astronaut with measles, and Mattingly is replaced by hotshot Jack Swigert (Kevin Bacon). Apollo 13—mother ship Odyssey and Lunar Excursion Module Aquarius—blasts off in a spectacular display enhanced by Digital Domain’s visual effects.

Almost immediately, something goes wrong. The remainder of Apollo 13 dramatizes NASA’s response, beginning with Lovell’s report to Mission Control: “Houston, we have a problem.” It is the movie’s defining phrase. The high stakes solutions are compelling, but, from Marilyn Lovell’s (Kathleen Quinlan) lost wedding ring on the eve of the launch to projectors, cars and televisions on the fritz, the movie’s fatalism lessens the drama. The resourceful, resilient men of Apollo—who rise to each troubled occasion—are made smaller by framing their heroics with such random acts of God. This tale may be true but the subject has its limits.

When leaking oxygen, poisonous CO2 and power problems are fixed, each conflict resolution has a cross-your-fingers quality. Whether Annie Lennox’s celestial vocals seep through the black space or a newscaster announces that Congress has issued a decree calling upon Americans to pray (it happened), Apollo 13 contrasts man’s triumph with God’s dominion over the universe. We may reach for the stars, but some vague premonition tells us to hit the dirt.

Mr. Howard dramatizes America’s space program with a degree of reverence for the rocket ship, for the men who fly it and for the nation that supports it. Each car, television and pair of eyeglasses recall the glorious era when America put man on the moon. And Mr. Howard’s outstanding cast, notably his brother, Clint, as Sy Liebergot, Loren Dean as John Aaron, Ed Harris as Mission Control’s Gene Kranz, Gary Sinise as Ken Mattingly and Mr. Hanks in the leading role, is a tribute to the brilliant men of NASA. His movie is a reminder that such men exist. Ten years after it was first released in theaters, that alone makes it worth watching once and again.

DVD Notes
This 10th anniversary, two-disc package is perfect for those with rocket fuel in their blood. It’s all here: the thrill of the countdown—in the shorter IMAX version, too—and commentaries by director Ron Howard and Jim and Marilyn Lovell. [Note: this edition is currently available only through private sellers; a similar version is available by clicking on the DVD cover image on this page]

If watching with the kids, start with disc two’s Lucky 13: The Astronauts’ Story, a condensed version of what happened that sets the proper tone for the movie—which is two hours and 20 minutes. The main disc one feature, Lost Moon: The Triumph of Apollo 13, is long and unfocused, though it does begin with Tonight Show host Johnny Carson introducing the Apollo 13 astronauts, probably an NBC Universal merger bonus. Other highlights in that piece include a press conference clip and a grainy President Nixon commenting upon the successful return of the Apollo 13 spacecraft. A couple of gripes: Production Notes are hard to read and Conquering Space: The Moon and Beyond pushes globalism, starting with its definition of the Apollo space program as a race between America and the communist Soviet Union—granting moral equivalency—and ending with a dedication to the “international space exploration community” which presumably includes the problem-plagued Russian space station Mir.

Director Ron Howard’s commentary is for diehard fans only, alternating between remarks on where a scene was shot and any extraneous detail with virtually nothing about the plot’s development or why he was attracted to the story. Main cast members are interviewed for the Lost Moon feature, which is the most comprehensive feature.

This article was originally posted on Box Office Mojo in 2005.