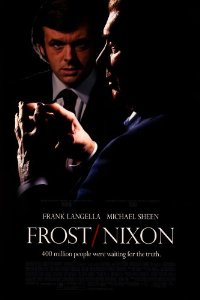 I remember the British broadcaster David Frost’s heavily promoted interviews with former President Richard Nixon back in 1977; at the time, it seemed odd that the one-on-one interviews weren’t being televised on a major network and an unknown Brit with prominent Seventies sideburns seemed an odd choice for the nation’s only president to resign to make his case.

I remember the Frost/Nixon interviews as overly dramatic, almost theatrical, in style, rather dull in content, and, ultimately, insignificant in historical terms. Of course, I was a kid, though I did follow politics and the whole bloated event seemed like a bust—more Seventies sensationalism like Geraldo Rivera and his opening of Al Capone’s safe or one of Evel Knievel’s daredevil stunts.

I knew there was a play based on the interviews—it sounded dreadful, but, then most of today’s plays sound dreadful. There was a musical called Urinetown. Enough said.

Thankfully, Frost/Nixon, directed by Ron Howard, rises above the material, presenting twin profiles in pragmatism with a psychological subtext worthy of its slightly superior cousin, The Queen. Both movies were written by Peter Morgan, who also wrote the play. But it takes someone with a deft, almost intuitive, grasp of television—Ron Howard, who mastered the medium early in his career as a child actor—to transform the material for the screen.

The result is gripping.

Frost, played by Michael Sheen—who portrayed British Prime Minister Tony Blair in The Queen—is a dandy who, evidently—well, as depicted here—yearns to be taken seriously. Nixon (Frank Langella), about whom much has been written and said to the point of caricature, was, like TV’s Archie Bunker, an insecure traditionalist with deeply held beliefs who apparently wanted to belong to the world, a characterization which Mr. Howard rightly and brilliantly does not ridicule.

Their quartet of vapid interviews—barely financed by huckster Frost, hustled by Nixon’s agent, Swifty Lazar (Toby Jones from The Painted Veil and Infamous in what amounts to an excellent cameo) and recorded for TV in Orange County, California—imports a tense interchange between the men and contains countless cultural signposts along the otherwise ordinary way. With no overt theme, Frost/Nixon is a sketch of two pragmatists who were commoners. Sheen is excellent—Mr. Langella is mesmerizing as the lumbering misfit elected twice to the nation’s presidency, overwhelmingly the second time—and the picture is among the year’s best.

With Morgan’s smart script, Mr. Howard hits the main marks. From the New Left’s post-Woodward and Bernstein, snarling journalism in James Reston (Sam Rockwell) and a Frost researcher named Bob Zelnick (Oliver Platt) who distorts everything (and the hair-splitting Watergate scandal was the era’s definitive overstatement) to promote a cheesy TV host’s ambitions to the largely obedient presence of ABC News’ stalwart Diane Sawyer at Nixon’s side as an omen of the coming age of obsequious celebrity journalism—with loud, brash Watergate journos first in line—Frost/Nixon makes its point that ‘whatever works’, Nixon’s pragmatic credo that gave us wage and price controls, HMOs and the Vietnam War, doesn’t work.

Neither does agenda journalism masquerading as moralism, as we see from the Frost end, best demonstrated by his empty vessel girlfriend, Caroline—a mirror image to the more widely known empty vessel Pat Nixon (Patty McCormack, acting with her eyes and delivering a telling, pivotal line)—who mouths off about credibility when she meets Frost in first class yet winds up being a bobble-headed tool for takeout food from Trader Vic’s.

But Frost/Nixon is foremost a side-by-side portrait of two wannabes, who, as one of them in an almost involuntary outburst, discloses to the other, are corrupt, self-loathing defeatists who seek power—in government and in the press—for its own sake. What a concept, and how utterly relevant in the age of Clinton (impossible for smug liberals not to think of that president’s abuse of power here), Bush and, yes, our dazzling new president, Barack Obama.

Ron Howard knows television and he puts Morgan’s script to close-ups and angles and pressure points that spin a compelling, psychological tale of men who personify selflessness bred by self-contempt.

With powerful performances by Frank Langella, getting the essence of Richard Nixon down to his desperate attempt to connect through a pet dog, and Michael Sheen with sad eyes and that frantic personality that suits a life on the tube, Frost becomes indistinguishable from Nixon and vice versa. What seemed like a bland anti-climax in 1977 becomes a cinematic symbol for our times, complete with the triumph of the politics of self-aggrandizement, to paraphrase one of its best practitioners, Bill Clinton, Nixon’s heir in this sense.

That leads to an item, which Frost/Nixon gets wrong, or, at least, leaves uncorrected. The impression left by the film is that Nixon failed in these four interviews to rehabilitate his image—yet the opposite is true. The Frost interviews, rejected by the credible press at the time, in retrospect previewed the plunge of the press into the tawdry, trashy institution it is today—from cable’s O’Reilly/Olbermann brand of celebrityism to the once respectable New York Times—and the legacy of Nixon, with his communist Chinese pandas, sad demeanor and pragmatism—dominant in today’s politics and fully accepted by the press—prevailed.

Originally posted in 2008 upon the movie’s theatrical release.