I didn’t plan to see John Ford’s Western Sergeant Rutledge, an undeservedly unknown movie about a hero who is black, on the blockbuster opening weekend of Marvel Studios’ overdone movie about a black superhero (Black Panther). But doing so underscored for me the contrast between these two extremely different movies. Both films feature titular black heroes who do not dominate screen time. Both heroes are leaders of their bands of chosen brothers. But Sergeant Rutledge, unlike Black Panther, depicts an iconic hero who remains superior in his ability and steadfast in his vision; he is a man who earns and keeps the audience’s respect and consistently shows integrity while acting on principle. What’s more, Braxton Rutledge is not a fantasy figure. The “top solider” in the U.S. cavalry faces a realistic foe in the deepest sense. He goes by reason and remains strong. As a so-called buffalo soldier, he makes advancement of black people possible. Sergeant Rutledge details and dramatizes what this costs and why.

Admittedly, Ford’s Monument Valley-based Western is imperfect, yet it is also fully engrossing. Beginning with a rousing song about “Captain Buffalo”, Sergeant Rutledge, like Ford’s 1939 epic Stagecoach, sets the plot in Arizona near the scenic Monument Valley in a town with a bunch of petty, old biddies. Billie Burke (The Wizard of Oz) plays the woman who bosses this band of whiny, gossipy women around and her character is married to the judge who is charged with hearing the case of a black man accused of raping and murdering a white woman some time after the Civil War. Plot points get rather silly as the judge’s wife becomes a witness for the prosecution in the court-martial trial of Sergeant Braxton Rutledge. The whole courtroom trial framing device becomes problematic, especially later in the movie, but, at its core, the court-martial’s an important stand-in for the era’s injustice against Americans who are black. So, it serves a crucial function.

Ford, who sought to make this movie and insisted upon casting handsome, strapping Woody Strode in the leading role, against the studio’s demands for an actor such as Sidney Poitier, grasps this functionality. The courtroom layout is a key part of the unfolding mystery and drama of the wronged black man on trial. The panel of white judges sits in observation of a single witness chair while the defense and prosecution face off. The judge, who drinks alcohol to excess and huffs and puffs in typical John Ford fashion, pledges that there shall be “no prejudice toward the accused.” 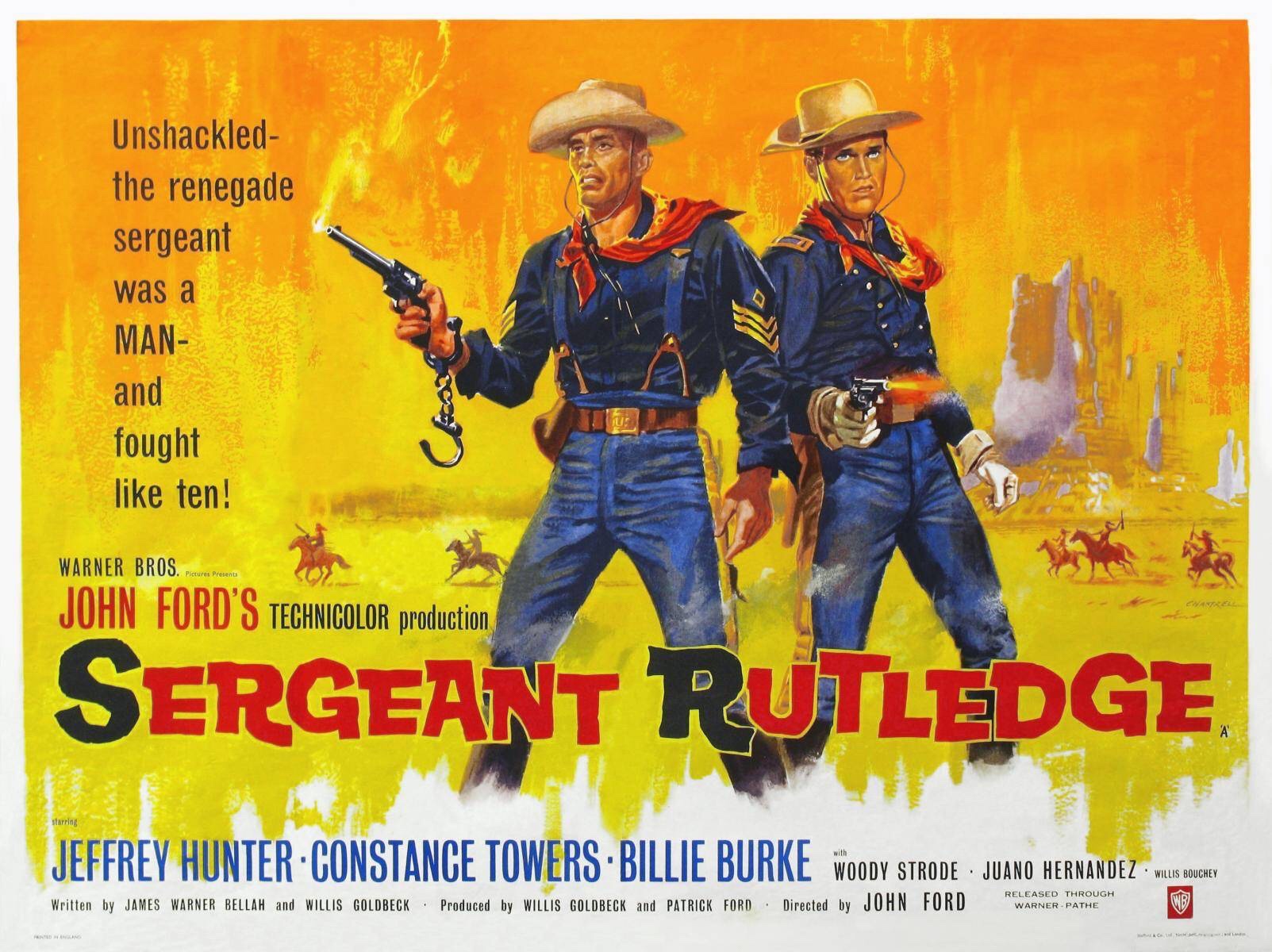 Enter Sergeant Rutledge’s defense attorney, blue-eyed Lieutenant Tom Cantrell (Jeffrey Hunter), who, unlike Strode’s swift, strong and silent soldier, fumbles when he comes on screen. It’s as though Cantrell will have to strive to rise to the caliber of a character like Rutledge, who never wavers and never errs. The relationship between the accused and his champion is among the most layered and loaded in the movie; it is, at times and in sum, an artful and potent statement on the equality of man and it is an accomplishment by all three men, Hunter, Strode and Ford, that the progression of one character is never at the other character’s expense. There’s real chemistry and artistry in their mutually tense, strained relationship.

With curiously stagy transitions from the courtroom to flashbacks of the events at issue, Sergeant Rutledge awakens the audience to the challenge of settling the West, which Ford skillfully uses to prime the story for its morality climax about the plight of the black man who, in this case, amounts to the black cowboy. A meeting on a train — a dead man at the train station — a woman (Constance Towers) stranded in the desert wearing a pink dress while Geronimo’s Apache Indians (echoing Stagecoach again) escape and attack settlers — Ford leads the audience to think of one plot scenario while dovetailing into another. The gamesmanship has a purpose, too, as it allows the audience to grow accustomed to Rutledge’s steely presence after being shocked when he puts his hand over a white woman’s mouth in anticipation of an Indian attack — and for his own sake, which he makes abundantly clear.

As the female in distress, Towers is no victim; she shoots to kill and does without getting hysterical. As he does in Stagecoach, Ford really knows how to throw people together in a crisis and let them hash out their similarities and differences. Through the scenes with Towers’ character, who’s already fallen for Hunter’s handsome cavalryman on the train, Woody Strode’s Sergeant Rutledge sets his character straight and clear. As the woman in the West becomes traumatized, again, it merely serves to underscore what the black man in America faces by implication.

When Rutledge buries a corpse and covers up blood, though there’s every reason to think that he does so because he’s a decent man, he’s instantly suspect in a way that a white man is not. Besides unrealistic courtroom developments, Sergeant Rutledge has limitations, such as Strode’s early scenes being too wooden. The Towers character won’t say the word ‘colored’ which is not realistic for this time period. Most of the cast, except Strode, Towers and Hunter, tend to overact, some to a noticeable degree. But, generally, plot layers leading to the rape and murder of a white woman unfold and build interest, suspense and tension.

Despite the usual Ford humor, with showy character actors, jokes about drinking alcohol and silly old women, Sergeant Rutledge is best seen as a mystery about the West’s mythology, not completely unlike Ford’s superior The Man Who Shot Liberty Valance, down to the two-man character contrast in Hunter’s Cantrell and Strode’s Rutledge. There’s a lot to unpack here as Ford loads up on powerful shots, scenes and suggestions, from the silly old woman who’s name-dropping for status and prestige, with the power to destroy an innocent man’s life, to female nudity. And, coming into the Sixties, John Ford demonstrates that he still likes his heroes with good looks, grit and seriousness. In stark contrast to every other witness who takes the stand, when Cantrell steps up to testify, he emphatically cuts the oath off before the bailiff can say “so help me God…”

Director Ford makes these sharp points, but he lets the pre-Civil Rights era movie’s American Negroes, buffalo soldiers, show and tell for themselves in the moving and poetic third act. Rutledge, who, if you disregard the need to account for facts, acts as though he may be guilty, says when he’s caught by his fellow black cavalryman: “why didn’t you shoot me?” He has reason to distrust that the state will grant a fair trial and he has the freedom papers, which emancipated him from slavery, as if to prove it. When Cantrell attempts to engage Rutledge, whom he knows and admires, and investigate, he ends up flustered, asking: “what does it all add up to?”

This is the question the 1960 audience is put on the spot to answer, too. But in Sergeant Rutledge, as against To Kill a Mockingbird, which was released two years later, the outcome of the wrongly accused black man’s trial is the ultimate point of the movie, not the nobility of its white characters. Braxton Rutledge, moved by the barbarism of Indians who butchered someone white, with his hooded, knowing, tired eyes, possesses qualities any man should admire. He stands alone against the world but as an idealist, not as a victim or martyr. Let that sink in about a movie made three years before Martin Luther King made his speech in Washington declaring “I have a dream…”

It’s impossible not to notice that Sergeant Rutledge’s theme, and Sergeant Rutledge‘s theme, foretells that stirring speech in Washington. He speaks of “someday” with a poignant vision, which gets severely tested in an ambush at Crazy Woman River. This turning point in the accused black man’s story marks an indelible moment in both this film and motion pictures. Until Sergeant Rutledge, black men were depicted as men of muscle with perhaps a sad, tragic or downbeat (or cartoonishly giddy) sense of life. The muscled, black buck stereotype, too, gets tossed away in Sergeant Rutledge. How the character regards himself is paramount and, with depth of sincerity, John Ford culminates the hero’s sense of himself in several climactic campfire scenes with song, an iconic stance and a reveal for how the buffalo soldier got his name.

Ford lights Strode’s deep-set eyes, cheekbones and granite facial features as if to highlight that he’s a man made of flesh, not some mindless brute or racial figure, during the sergeant’s testimony, which include a single and proper use of the term nigger. Again, the staging of opposing legal minds is pivotal to the dramatic suspense. Ford’s shots of certain characters in proximity add to the thematic rewards. For example, when Towers spews against Hunter for a perceived transgression he makes against Strode’s Rutledge, recoiling in disgust as if physiologically imploding, Strode’s sergeant stands in the background, lifting his chin in pride, defiance and liberation, as though he is undaunted by any injustice. He is proud, chiefly of himself, and he is unconquered. But, again, by this point the audience knows that he is not a pulp fiction cover or lurid movie poster pinup; he is a whole man who experiences a range of emotions. As he plainly tells the court: “I’m a man.”

Sergeant Rutledge does not stop at that, however, and, again, for 1960, Ford’s foresight in laying out a portrait of a soldier who’s black, persecuted and heroic all at once on the Western’s larger than life canvas is commendable, though his grandson Dan Ford writes in Pappy that Ford sensed in this film the ability to make money, so it’s not some sort of charity project. A case in point is how Ford treats the buffalo soldier in general, not just in particular. Look at the movie’s exaggeration among blacks in the cavalry unit for evidence of how especially attuned John Ford was to storytelling through oral histories. Each man in the cavalry talks at the right moment in Sergeant Rutledge about being welcomed at the White House by President Lincoln, embellishing history and reality to inculcate in themselves the sense of mythology, man’s idealized story, to summon their courage in the Indian Wars, stoke optimism and foster in their camaraderie the sense of a sacred mission to elevate and uplift future generations of those who look like they do. That the Negroes in the film’s 9th Cavalry smile as they march past the happy white people with pride carries an imbued sense of a greatness to come, made possible by the title’s heroic top soldier.

Whites, too, transform by having known Woody Strode’s top buffalo soldier. In seeing how Rutledge goes by reason, moral absolutes and his own judgment, Constance Towers’ character, an Easterner who’d been reluctant to embrace the glory of the West, finds in herself the courage and power to make her own personal progress. She cradles a wounded black boy to help him die or heal in peace and comfort and she ultimately learns from her mistakes.

Sergeant Rutledge is not a perfect or fully exalted movie. Its mystery is solved in a lust-driven anti-climax that seems to appear from another movie and Ford’s broad humor, the secondary cast’s overacting and other choices slow it down or dull its fine finish. But in an era in which a mediocre action blast such as Black Panther takes credit for a heroism it does not deserve, its best qualities really shine.

This article originally appeared on The New Romanticist.