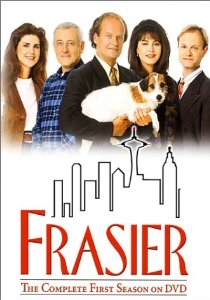 One of television’s best comedies, Frasier, premiered on this date in 1993. Boston psychiatrist Frasier Crane (Kelsey Grammer), featured as a subsidiary fall guy on NBC’s Cheers, spun into his own series in the same year that Cheers ended its long run. The stereotypically uptight intellectual character on Cheers is differentiated from its previous incarnation and deepened here in the first season. Frasier moves back to Seattle and settles into a modern apartment in the fictional Elliott Bay Towers. He starts a new job as a talk radio host.

Frasier’s retired policeman father Martin (John Mahoney), a Korean War veteran recovering from an injury, moves in, too. Physical therapist Daphne Moon (Jane Leeves) is hired. Psychiatrist brother Niles (David Hyde Pierce), in spite of his marriage to unseen socialite wife Maris, fixates on Daphne, who claims to be “a bit psychic”, while Frasier’s salty producer Roz Doyle (Peri Gilpin) looks daggers, quips here and there and goes on a date with a station geek named Noel. It is in the first season that Martin hosts the apartment’s first unexpected overnight guest. Ex-wife Lilith visits Seattle. Frasier Crane is nominated for his first broadcasting award.

That Frasier listens to and seeks to help people seeking good health underscores the show’s unspoken secondary theme that to feel good is to think, actively think, about life and pursue happiness with effort. According to the DVD’s features, Mr. Grammer insisted that his character’s line of work be taken seriously and not treated as a joke. This approach sets Frasier apart from its contemporaries, such as NBC’s Seinfeld, the “show about nothing”. Frasier is the show about everything; everything meaningful, everything wonderful, in all its hilarity, agony and elation.

The first season unveils everything that defines Frasier: the swank apartment, its Space Needle view, the patio overlooking the city, the piano where he plays music, his dad Martin’s ugly old chair, Cafe Nervosa, KACL, the first RV trip, his father’s poker game, Bulldog the brash sports host, Gil the effeminate food host, Noel the nerd, Bebe the wild-eyed agent, glasses of sherry and a quirky dog named Eddie. Frasier, who struggles with (and consciously accepts) the reality of middle age, obsesses in one episode on dying and crashes a Jewish death ritual, where his neurosis is outdone in droll, dark humor. He makes connections, he learns, he makes progress.

In fact, longtime fans looking back at this first season will appreciate how carefully conceived the stories are and how lead characters contemplate, grow and improve. The psychic from Manchester, crabby ex-cop, pretentious younger brother, sharp-tongued tart and hapless title character, a Charlie Brown like figure who is fundamentally searching for happiness, are each in plain sight during season one, which begins with jazzy opening credits and ends with Kelsey Grammer singing about egg on his face.

One of the best series subplots, the repressed relationship between Niles and Daphne, begins here with the season’s best episode (“A Midwinter Night’s Dream”) which involves a storm, a predisposition to act on infidelity and a Glockenspiel clock. This episode is an example of Frasier‘s masterful writing, staging and acting. As the first episode to feature the mansion where Niles resides with his heiress wife, the organic setup of forbidden romantic conflict, which begins at Cafe Nervosa when Daphne flirts with an artist who works there, adds tension and builds to a humorous climax and thoughtful conclusion. In it, one sees each character choose to renew and thus act upon his values – Niles on his vows, Daphne on her desire, Roz on her kindness, Martin on fatherhood and Frasier on his loyalty. The play is slow, taking time to earn audience trust. The payoff is both illumination on each of the five characters and the domains they inhabit – home, work, cafe – and a tantalizing piece of warm, benevolent humor ending on the promise of more to come.

Frasier’s flaw is a tendency to ham amid contrivances. Sometimes, however, life seems contrived. In this sense, Frasier’s first season sets the standard for the series theme – painfully concretized with the murder of its co-creator David Angell by Islamic hijackers on 9/11 – that life is neither easy nor automatic and that one’s paramount purpose is to achieve happiness here on earth. This idea is evident in the beginning of the 11-year comedy series (especially for those who remember the choice Frasier makes in the series’ finale) with Frasier, in the premiere season’s final episode, sitting solo in Cafe Nervosa after finally and truthfully answering his brother’s question “are you happy?” (“My Coffee with Niles”), a sincere, unmolested and bittersweet moment which foreshadows the end of Frasier’s run.

Viewers learn more about the show through DVD features, too. But the best part of Frasier’s first season is seeing a man who strives – consistently, valiantly, and one might say heroically – to act in his self-interest. Frasier (1993-2004) is a first-rate comedy in the first year. The show ages well, with an even greater reward for those who know where Frasier ends up.