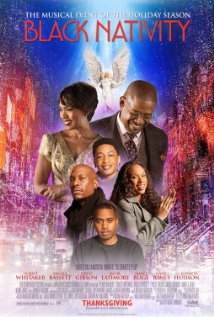 Based loosely on the musically-driven play by American Negro writer Langston Hughes (1902-1967), Black Nativity follows its own path. It doesn’t work as a musical. It’s not entirely successful as a motion picture, either. But writer and director Kasi Lemmons (Eve’s Bayou) adapts the Harlem Renaissance writer’s work for film with conviction, passion and Christmas spirit. The picture, released by Fox Searchlight, opens tomorrow.

Forget the unfortunate title, which Lemmons ties into Hughes’ original gospel-themed song-play as it’s being performed in a church by a reverend played by Forest Whitaker, who anchors the all-black, all-star cast. The story centers upon an angry child (Jacob Latimore) with a compelling and universal theme. More on this and what’s wrong with Black Nativity later. There’s a lot to unwrap and treasure in this ambitious movie. Credit goes to Ms. Lemmons for thinking large.

Latimore’s troubled son of single mother Jennifer Hudson (who can’t act and eventually gets around to screaming her tunes) comes out of a Baltimore school with street thugs literally kicking a Santa Claus. What begins as a bitter youth’s tale in Baltimore, with all the pent-up rage of an angry, unfathered black boy, will circle around to deposit the anger where it rightfully belongs. I admire this movie’s courage to express anger in a constructive way. Black Nativity shows a grasp for addressing dysfunctional family issues.

In one scene, for instance, the kid cuts peppers with his mother’s mother (Angela Bassett playing nurturer for a change) in her swank Harlem kitchen. Having been dumped on his absent grandparents (Whitaker and Bassett) after his momma loses their home in foreclosure, the scrawny but scrappy kid ‘fesses up that he doesn’t know what to call her. With perfect anxiety, she tells the boy she’s not too sure how to handle this situation, either. It’s a tender moment, when we see that proper adult modeling means keeping communication based on what’s real. Grandma earns his trust, which makes the wayward Christmas child want more of what’s good for him. In a world with easy access to what’s bad for him, and an obstinate mother and grandfather ready to block, suppress and repress his discovery of the best within, we want this child to pull through.

The character gives every reason to fail. He makes bad choices. He seeks out criminals such as his cellmate Tyrese Gibson. He doesn’t even know how to cross the street without putting himself in harm’s way, recklessly charging forth. Black Nativity counters with mixed messages of what amounts to secular goodness through love, catharsis and redemption. The songs mix gospel, rap, pop, hip hop and Christmas classics and most of them are poorly placed, forgettable and distracting or derailing. Hudson’s a gospel belter at heart, not an actress, and it shows. But when the plot, cast and theme have their way free and clear, such as on “Hush Child (Get You Through the Silent Night)”, the Jesus birth tale of lost outcasts finding a home gets a groove and delivers touching moments.

Black Nativity is obviously a labor of love from Kasi Lemmons, who co-writes songs and finds a perfect and powerful place for her husband, Detroit actor Vondie Curtis Hall, as a pawnbroker. Despite platitudes, predictable plot points and scenes and tunes that don’t fit, work or stimulate, she’s made interesting scenes of Hudson singing, Whitaker and Bassett stepping up and a good turn by an underused Mary J. Blige as an angel. Distilled to its best, her film expresses that man should be nurtured and worshipped like he’s God and that, if he’s not, he’ll be lost. Black Nativity cleverly precedes affirmation with a renunciation, when it momentarily observes, in one character’s words, that “we’re all here right now.” If only this movie were, too.