The Saga of Eagle Rock Plaza

The Saga of Eagle Rock Plaza

Do you know that the 44-year-old Eagle Rock Plaza—anchored by Macy’s and Target, predominantly serving northeast LA’s Filipino community and known as the mall of Manila—was once a highly anticipated shopping destination? 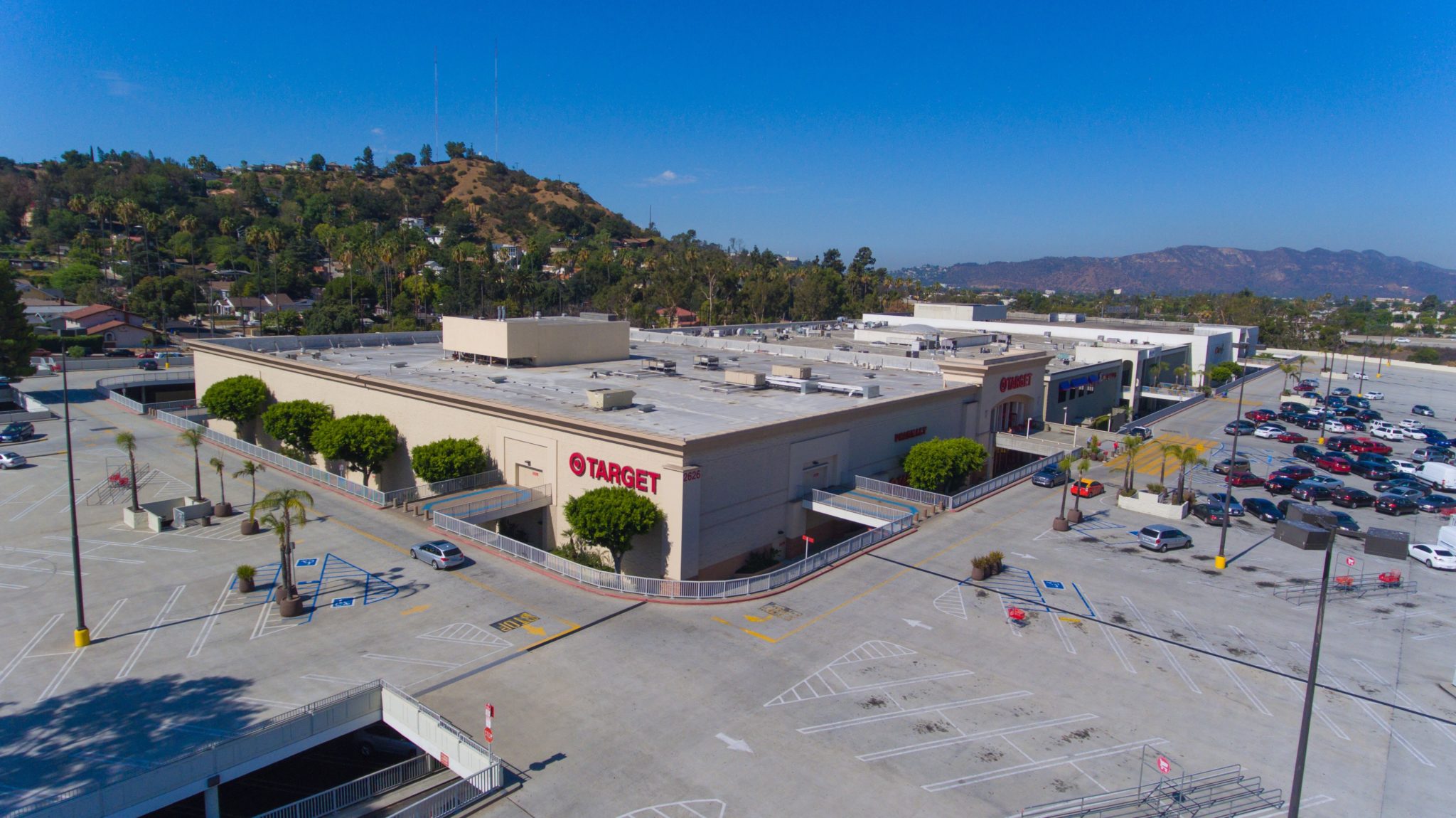 Though it became principally associated with one of the worst serial killer crimes in LA history, the mall at the Ventura and the Glendale freeways began with bright prospects. In fact, Eagle Rock Plaza hosted a teen idol, an Olympic gold medalist and movie starlet. Residents were so excited they demanded to have ‘Eagle Rock’ put in its name. Glendale was so concerned about competition that the city mandated free downtown parking—before Eagle Rock Plaza even opened.

But Colorado Boulevard’s first mall near the Los Angeles/Glendale border, which debuted on October 1, 1973, would also become implicated in a grisly serial crime, marring the mall’s reputation. Two local Catholic schoolgirls, Sonja Johnson, 14, and Dolores “Dolly” Cepeda, 12, were last seen boarding a bus there on November 13, 1977.

The girls did not know they were being followed by the Hillside Stranglers. In his book about the rape and murder spree, Darcy O’Brien wrote that “when the girls got off the bus on York Boulevard, [the stranglers] motioned them over to their car, flashing [fake] police badges.” They offered the girls a ride home. The girls went along. Their bodies were later found in a ravine by Dodger Stadium.

Eagle Rock Plaza became a focal point for the Hillside Stranglers killings that terrorized the city, causing councilman Arthur Snyder to blame the press for “treating Eagle Rock as if it were the city of the dead.” Afterwards, LAPD formed a task force. The murderers, Angelo Buono and his cousin, Kenneth Bianchi, were eventually caught, arrested and convicted.

Before that sordid chapter—before there was a Glendale Galleria, Burbank Town Center or the Americana—Eagle Rock Plaza had been on an upward trajectory. Eagle Rock’s Chamber of Commerce planned to host a Miss Eagle Rock beauty pageant and a street dance featuring Eagle Rock High School’s band. The Chamber described the forthcoming mall as “two sunny levels in the only completely enclosed shopping center in the Verdugo Valley.”

Montgomery Ward and Company had purchased 106 properties—motels, a church, businesses, apartments and houses—for development of the 23-acre lot. The site was cleared in 1970. On November 14, 1971, May Company and Montgomery Ward announced that Ward’s would anchor the east—and May Company the west—with “55 specialty shops in a climate controlled mall with a fountain, reflecting pool and open areas with live trees towering through both levels.”

Grand opening ads featured enticements to buy men’s clothing “whether you’re a swinger who digs baggy slacks” or not and an electric hairsetter for $6.88—including 15 rollers, a heating unit and built-in mirror, all in a “stylish carrying case”. Customers could buy a book by actress Gina Lollobrigida, autographed by the starlet during a meet-and-greet at the May Company.

Tenants followed. Vroman’s Bookstore of Pasadena opened a branch. Morrow’s Nut House roasted nuts, first boiling the nuts in butter, in the store window. Kinney Shoe Store opened on the upper level with free balloons, shoehorns and a toy with purchase, teasing that men’s genuine suede leather boat shoes were on sale for $4.97 “while they last”. Competitor Thom McAn got a visit from beauty contestant Miss Los Angeles.

Shoppers could eat breakfast at Howard Johnson’s, browse Waldenbooks, The Wherehouse, Chess King, Contempo Casuals and See’s Candies, order lunch at Bob’s Big Boy, and indulge in ice cream at Baskin-Robbins. At one point, you could see a movie at one of four 290-seat Lippert Theaters movie houses, dubbed Eagle Rock Cinema.

“For a while, it did really good business,” said Eagle Rock historian Eric Warren, president of Eagle Rock Valley Historical Society. “This was a brand new thing.” 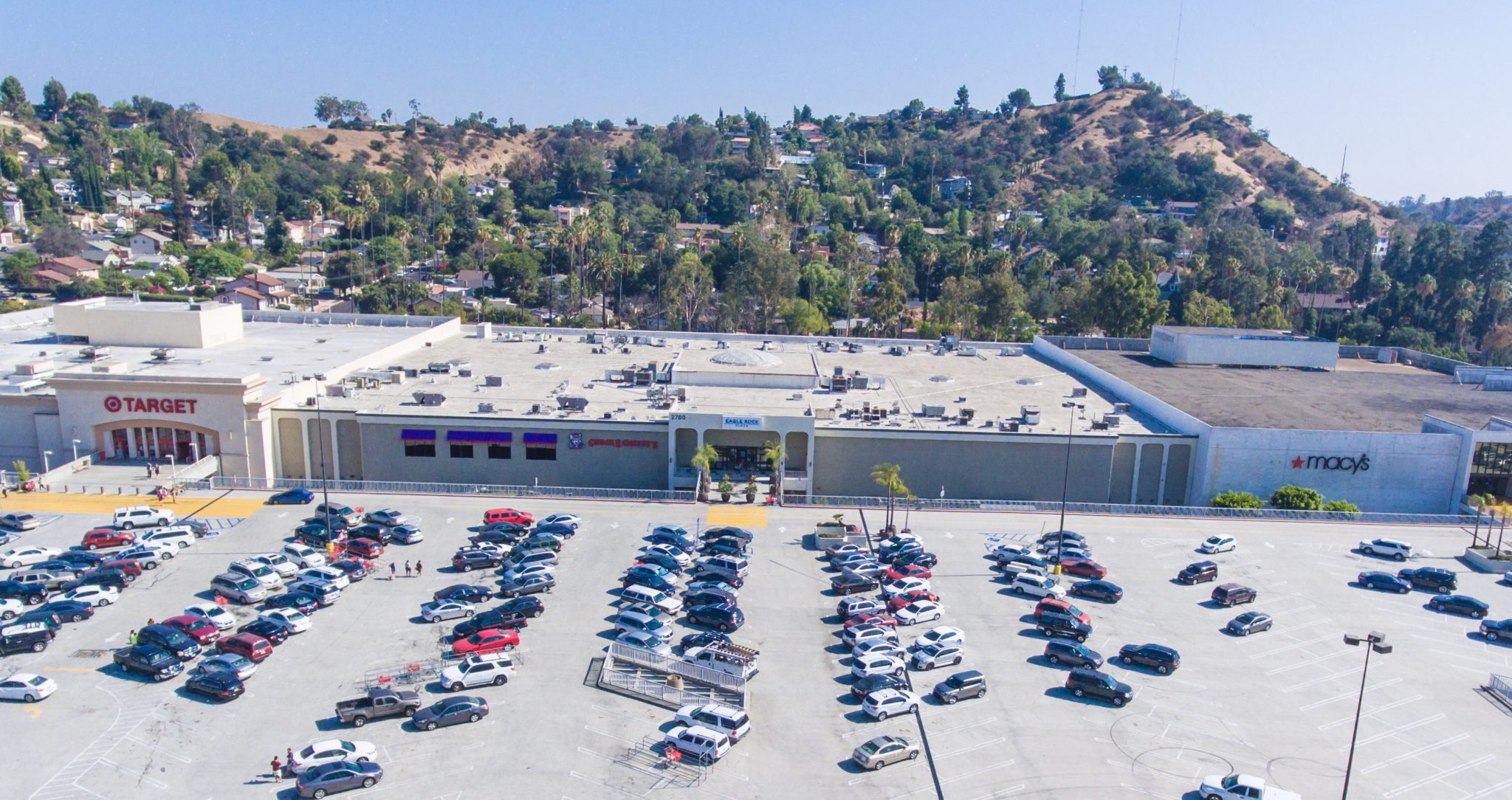 Eagle Rock Plaza countered by hosting events, such as a police expo featuring a helicopter and bomb-sniffing dogs, an opening salute to America’s Bicentennial on Flag Day and center court entertainment with the Crescenta Valley Sweet Adelines performing with a barbershop quartet from Occidental College. Pop star Leif Garrett greeted Santa Claus to fight muscular dystrophy. There was also square dancing, a kite display forming an eagle with an 8-foot wingspan—even a Civil War reenactment.

By then, property tax increases were hurting store sales. Then, the Hillside Stranglers abducted their youngest victims there. Warren thinks that, over the years, Eagle Rock Plaza has become outdated.

“Architecturally, they bought into a model which, unfortunately, is not viable anymore. The parking lot is an almost half a block barrier to the street that people walk on,” Warren said. “It provides a kind of nucleus for the Filipino community and a lot of people do go to Target,” he said, “but my sense is that as a general perception it’s fairly out of fashion. What do you do with a massive piece of infrastructure that is no longer fashionable or functional?”

This article was published in the Glendale News-Press and LATimes.com in January 2017.