Roger Keats, former Illinois state senator (1979 to 1993) and recent candidate for Cook County Board of Commissioners, was born in Ohio, moved to Chicago’s Hyde Park and grew up in Evanston, establishing a political career in Wilmette, where he lived in a house on Sheridan Road. That he now lives in a town called Dripping Springs says everything about what for Mr. Keats ultimately became a bad experience on the North Shore.

The conservative Army veteran and author of Chicago Confidential, who fled Illinois’ government corruption and punitive taxes and regulations for Texas last year, was known as a maverick when he served in the Illinois state legislature. He recently spoke with The North Shore Weekend about politics and his decision to leave the Land of Lincoln from his ranch near Austin, where he lives with his wife, Tina. 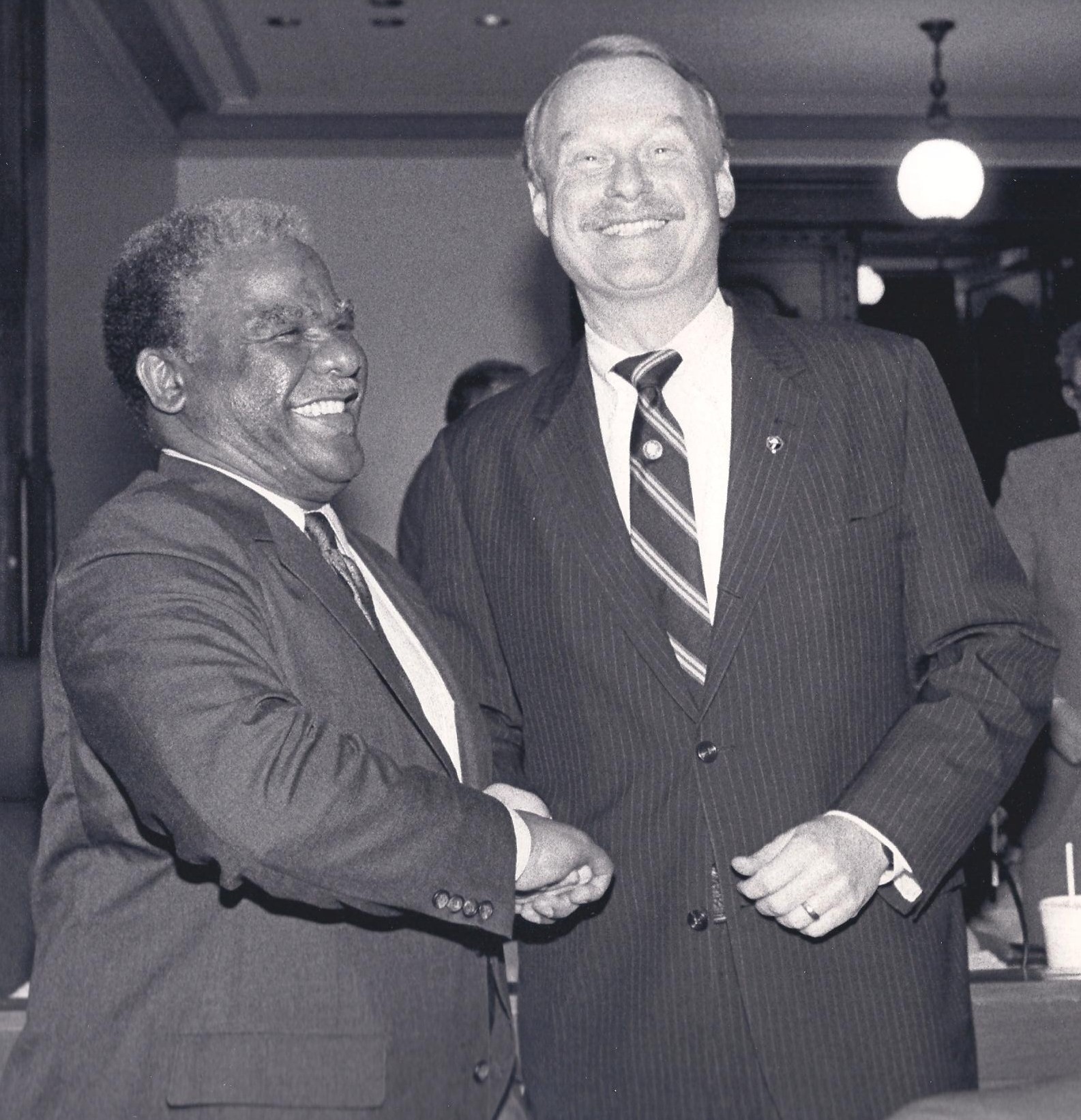 Keats, who was honored by the Illinois Judicial Council in 2009 in recognition of Black History Month for his work with black legislators in trying to end corruption, would seem the ideal beneficiary of abolitionist Abraham Lincoln’s legacy of individualism and true republicanism. The former all-American athlete had started his career as a youth walking precincts for former North Shore congressman Donald Rumsfeld and had been mentored by another jock Republican, former Buffalo Bills quarterback and GOP congressman Jack Kemp.

“Jack and I got to be friends and he was always encouraging people to reach out to blacks in urban areas,” Keats explained in a phone interview. “I had grown up with blacks when I competed in athletics—at Evanston Township High School, my friend and teammate was the only black all-American swimmer, Ron Bacon—so I always took Jack’s inclusive views to heart.” Keats, who was 6 feet 3 inches by the age of 14, had also been an all-American swimmer at ETHS, where he later taught and coached after earning his degree in education from University of Michigan.

It was in Ann Arbor at the University of Michigan that Keats witnessed the birth of the New Left movement and it moved him to the right. He received a master’s degree from University of Illinois, served in active military service as a lieutenant in the U.S. Army and went to work in Washington, DC, as a congressional committee researcher, where he worked with Edwin Feulner, president of the conservative Heritage Foundation, and Kemp. Keats became a part of the emerging New Right movement. He returned to the North Shore, ran for a seat in the General Assembly and was elected in 1976. Roger Keats was 28 years old.

He had already been shaped by politics in action. His brother, Bob, was killed in Vietnam during the Tet Offensive on Feb. 2, 1968—Robert Keats, to whom Chicago Confidential is dedicated, is buried at West Point—after having been appointed to West Point by another North Shore representative, Congresswoman Marguerite Stitt Church.

“My parents had been active in politics,” Keats said, “in [businessman] Wendell Willkie’s presidential campaign and also for Marguerite Stitt Church.” After Church left Congress, Keats worked for the successful congressional campaign of a young executive named Donald Rumsfeld, who would become America’s secretary of defense on the eve of the nation’s worst attack. “I met Rumsfeld when we were working precincts,” Keats remembered, adding that Mrs. Rumsfeld often came along. “I was in charge of a precinct in the 6th ward—the very northwest corner of Evanston—and I’m proud to say we won that ward.”

Keats had supported Ronald Reagan in 1968 while in college—before Reagan declared his candidacy—after he was inspired by Reagan’s warning that the nation might be doomed to “a thousand years of darkness” in a televised argument for Barry Goldwater’s 1964 presidential campaign.

“That speech was the best political speech I’d ever heard,” Keats said. By the age of 20, Keats had been assistant campaign manager for another North Shore congressman, Phil Crane, who replaced Rumsfeld as the North Shore’s voice in Congress.

“Phil Crane was brilliant,” he said. “His depth of history—he had been a college professor—was amazing. I drove him around for 45 minutes and used to sit and chat with him in traffic on the way to Palatine. We worked the train stations together.”

Church—Crane—Rumsfeld—Roger Keats had known or worked for every North Shore congressional representative elected since 1950, each of whom went on to national prominence. His experiences paid off. He was elected to the State Senate, where he fought Chicago corruption, introduced some fiscal discipline in regional government transportation and led the battle to end state banking restrictions. Keats was a state senator until 1993, was appointed by Gov. Jim Edgar to oversee the Port of Chicago, which he did until 2001, and, from the mid-1990s until recently, he worked as an adviser and branch manager in the financial sector for Morgan Stanley and Oppenheimer.

So, why did the lifelong North Shore resident, a self-described “Big 10 jock” who lost his last campaign in 2010, leave?

His answer comes swiftly, easily and thoughtfully. “I don’t represent the folks who live there anymore,” he said. “Illinois is dominated by people who govern by connections—down here in Texas, I’m surrounded by oil patch people who actually produce wealth.”

“There is no Republican opposition in Illinois,” he continued. “I think that, in a way, you eventually become complicit. [Disgraced former Gov.] George Ryan was the death of the GOP in Illinois. [Illinois State Senator] Dan Duffy is a bright spot. Maybe [state Treasurer] Dan Rutherford. But the North Shore doesn’t have a Republican representative. [Democrat Congresswoman] Jan Schakowsky is arguably the most radical leftist in Congress.”

“I do miss the trees and the water in Lake Michigan,” he confided. “I enjoyed my rides through Gillson Park. But I like Texas, which is a lot dryer. We’ve got some gorgeous live oaks. I miss my friends, too.” He paused, adding, “but I could live on the difference in property taxes.”

Keats is proud of his record—including what he sees as a legacy of racial harmony. “During the Operation Greylord [judicial corruption] scandal, none of the indicted judges were Republican, none were black and none were Latino,” Keats recalled. “So, we put together a coalition to clean up Cook County courts. No judges have been indicted since.”

The former Wilmette resident doesn’t hold back on advice for today’s GOP. “They need to get out of Washington—both parties do—because both parties are so entrenched in Big Government, Big Labor and cronyism and there’s no real leadership,” he sad. “The Republican Party is too into that Washington cult—but it’s business that makes America vibrant. As a party, we need to get back to promoting personal freedom.”

Speaking from his two-acre ranch, Roger Keats is wistful when he talks about life on the North Shore. “I’m disappointed, not bitter,” he said. “And I am happy. Texas is much friendlier. I still follow the Big 10, but Texas is home. Those last years on the North Shore, I quit feeling like I was home.”

This article was published in The North Shore Weekend in the March 22, 2013 edition.