This year’s true story movie subjects—boxers, racehorses, serial killers—reflect the lack of Hollywood’s hero worship and this is notably evident by the fact that there’s never been a movie about America’s astronauts who were the first men on the moon. The movie Apollo 13 is probably comes as close as today’s culture allows. It was ten years ago this summer that the astronaut-themed movie blasted off at the box office—solidifying both director Ron Howard and actor Tom Hanks as top players in Tinseltown.

The real rocket lifted off 35 years ago.

In retrospect, it was the beginning of the end of America’s most beloved space program, the 13th vessel in the battle to claim the moon for man—one in a series of 17 long, complicated and noble endeavors. Apollo, with an aim to land a man on the moon, accomplished its greatest mission with Apollo 11 on July 20, 1969. But Apollo was not universally embraced: it was vilified, debated and worshipped by philosophers, astronomers and movie stars.

Emblematic of its time, Apollo 13, manned by Captain Jim Lovell, Fred Haise and Jack Swigert—who had replaced Ken Mattingly late in the training—launched on April 11, 1970, eleven days before the environmentalist movement’s first Earth Day. Lifting off on a Saturday from Cape Kennedy in Florida, with the motto, Ex Luna, Scientia, (Latin for: From the Moon, Knowledge), its goal was to put the first man on the moon’s more treacherous region, near crater Fra Mauro (named after an Italian mapmaker).

Apollo 13 never made it.

Crippled by an explosion of then-unknown cause, a series of catastrophic events occurred, which jeopardized the lives of the astronauts. As the 1995 movie suggests, the world watched and waited while the skilled men of America’s National Aeronautics and Space Administration (NASA) worked diligently to solve the multiple problems. At the time, Pope Paul said: “We share the universal trepidation for the fate of these heroes.”

But American astronauts were not heroes to everyone, and heroism was not exactly what motivated Ron Howard to make a major motion picture based on the captain’s account. “The bittersweet quality of Jim Lovell’s experience definitely drew me in,” Howard explained during the summer Apollo 13 was released. “Here was a guy, arguably the best-equipped individual to walk on the moon, and the opportunity was pulled out from under him. It was devastating, and we can all relate to that kind of disappointment.” 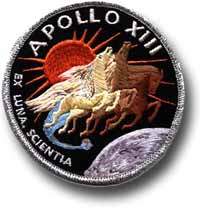 In fact, some had regarded failure as man’s destiny. Broadcasting from Cape Kennedy before Apollo 11 reached its destination, CBS News anchorman Eric Sevareid wondered whether man’s ability to reason would prove his ultimate flaw. Sevareid suggested that “the metal plaque [astronauts Neil] Armstrong and [Buzz] Aldrin expect to place on the moon will become man’s epitaph.”

It hasn’t, but Sevareid’s contempt for manned space flight was shared by other intellectuals, with the notion of flying a man to the moon ignored, mocked or condemned. During Apollo 13’s harrowing plight, with the possibility that the crew would be lost in space, pro-Communist actress Jane Fonda—currently trying to make a comeback with a book about her three husbands’ affairs and director Robert Luketic’s upcoming Monster-in-Law—was staging a 36-hour fast for peace in Denver, Colorado.

After hearing President Kennedy‘s proposal to put a man on the moon, writer Walter Lippmann observed: “There were two big mistakes. One was the commitment to put man, a living person rather than instruments, on the moon. The other mistake was to set a deadline—1970.” Former President Dwight Eisenhower agreed, scowling: “To spend $40 billion to reach the moon is just nuts.” Later, before Jim Lovell was propelled into the first lunar orbit in Apollo 8, British astronomer Bernard Lovell (no relation) attacked Apollo as silly and wasteful.

Hollywood joined the naysayer chorus, making movies about man losing control of space exploration to a computer (2001: A Space Odyssey) or reverting to primitivism (Planet of the Apes). An astronaut character named Jim dies in the downbeat Marooned, a depiction which gave Jim Lovell’s wife, Marilyn, nightmares before Apollo 13’s liftoff. With that trajectory, Ron Howard’s picture didn’t exactly have to take flight to seem like it was soaring. As Time magazine’s James Collins, reviewing Tom Hanks’ Home Box Office series From the Earth to the Moon, describes the Apollo 13 plot: “guys go up in space, look as if they’ll die, succeed in not dying.”

Finding the silver spacesuit lining paid off: Apollo 13 grossed $174 million at the box office. Netflix founder Reed Hastings apparently liked the movie enough to rent it in 1998—holding on to the video for six weeks and being so incensed by Blockbuster’s $40 penalty that, as Hastings said later: “If I’d returned it on time, we wouldn’t be here today.”

Some Americans opposed man’s exploration in space, on screen or in reality. Weeks prior to the launch of Apollo 8—Lovell’s earlier Christmas 1968 moon mission—religious fundamentalists bombarded NASA with complaints about flying during Christmas.

By the time Apollo 13 returned to earth, it seemed America’s exuding confidence had been shaken—we were losing the war in Vietnam—and, lacking any principled argument for manned space exploration, Americans seemed satisfied with the end of the Apollo era. Even the astronauts seemed to have accepted Eric Sevareid’s earlier evaluation of the ability to think as proof of man’s original sin.

Apollo 14 astronaut Edgar Mitchell echoed astronomer Carl Sagan’s views when he endorsed merging faith and science, and the moon had a mystical feel for Apollo 15 astronaut Jim Irwin, who claimed that he felt the presence of God. Irwin later quit the astronaut program and became a preacher. Apollo 13’s backup astronaut, Charles Duke, whose measles had prevented Ken Mattingly from boarding the spaceship, swore that, while looking out of Apollo 16, he was overwhelmed by what he called “the certainty that what I was witnessing was part of the universality of God.”

But writer Ayn Rand, who had been invited to witness the launch of Apollo 11—and did—had other ideas, bringing the meaning of space travel back to reality. After witnessing the Apollo 11 rocket ship lift off, she wrote in her publication, The Objectivist:

Frustration is the leitmotif in the lives of most men, particularly today—the frustration of inarticulate desires, with no knowledge of the means to achieve them. In the sight and hearing of a crumbling world, Apollo 11 enacted the story of an audacious purpose, its execution, its triumph, and the means that achieved it—the story and the demonstration of man’s highest potential.”

As for Apollo 13, the mission’s purpose was eventually achieved. During the next Apollo mission, Apollo 14, Alan Shepard—the first American in space—accomplished what Apollo 13 did not, reaching the part of the moon that had been his failed predecessor’s designated impact area, the rugged terrain near Fra Mauro.

“It’s been a long way,” Shepard said, his image appearing on television sets around the earth. “But we’re here.”

I wrote this piece as a featured article in conjunction with the 10th anniversary of the release of Universal’s Apollo 13. A version of the article was originally published on April 5, 2005 on Box Office Mojo.