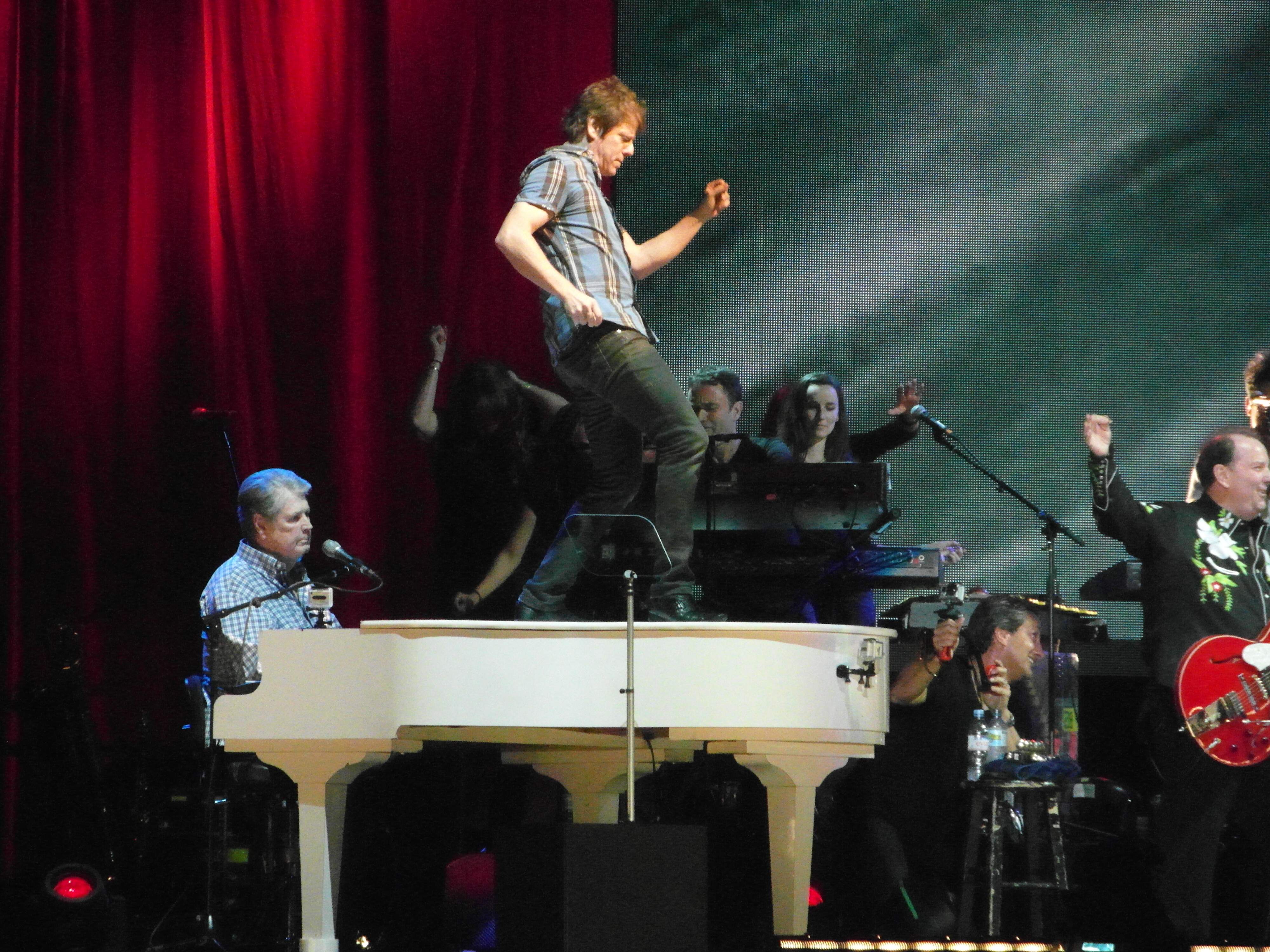 This is an artist’s cautionary tale, though it is not a story without success and rewards. The artist is one of the North Shore’s greatest rock musicians, who was recently interviewed in Los Angeles, and he’s created songs and performed with rock’s legends: the Beach Boys’ Brian Wilson, Paul McCartney, Neil Young, The Who, Bruce Springsteen, Paul Simon and Elton John—and he did so after modest beginnings in a rented house near Mallinckrodt College on Wilmette’s Ridge Road. His name is Scott Bennett.

If you’ve heard of him, it may be because, even as a boy, Bennett, born in Evanston Hospital 48 years ago and once enrolled at Harper Elementary and Howard Junior High schools in Wilmette and at New Trier in Winnetka, was like a rock star.

The multi-instrumental musician had a high school rock band called A Fine Mess, which was popular among North Shore teens and, when the group won a nationally televised battle of the bands competition hosted by Sammy Davis, Jr. in 1987, deals with Billy Joel’s Piano Man producer and a major record label were drafted. Then, the band broke up.

Bennett turned to creating commercial jingles, a legitimate option at the time for a singer-songwriter in Chicago. “Someone was looking for someone who could sound like Sting for a Doritos commercial,” he said during an interview at a coffee shop in midtown Los Angeles. “So, at nine in the morning, I became that guy who can hit high C [note] on a downbeat. I was [auditioning] against Dave Bickler, the lead singer from Survivor [“Eye of the Tiger”] and I got the gig.” Bennett said it changed his perspective on being a teen-aged rocker after his band’s false start. “I made 900 bucks and I didn’t have to get a summer job my senior year in high school,” he explained. For a kid living with his single, divorced mother across the street from what was then a Catholic women’s college in Wilmette—Bennett lived next door to Saturday Night Live’s Bill Murray—it was a real breakthrough.

Jingle deals rolled in, Bennett said, including a contract for Oak Brook, Illinois-based McDonald’s. At the peak, Bennett said he was making six figures. For a tune he wrote and sold to Kellogg’s Sugar Pops breakfast cereal, he made over $10,000. He wrote and sang for Old Style, Frosted Flakes and Pop Tarts.

“My dad had turned me on to Dave Brubeck,” Bennett recalled, “and my mom liked Ella Fitzgerald. But they both liked the Four Freshman. My big break was with [the Beach Boys’] Brian Wilson, who likes the Four Freshman, so I understood those harmonies more than the average kid.” Bennett, who lives in L.A. with his wife, Jenny, still plays with Wilson’s band. “Brian will do things with song parts from the top down to the bottom up and vice versa, which I think he got from Bach. I have to keep up,” he said.

According to Bennett, 48, keeping up keeps getting harder. With his jingles income, he had formed his own Chicago band, Scott Bennett and the Obvious, with all New Trier graduates—guitarist/keyboardist John Zdon, bassist Mick Vaughn and drummer Matt Walker (Bennett plays drums, bass guitar, piano, and harmonica)—which played Chicago’s Limelight and had a deal with Warner Bros. until that, too, fizzled. Soon, so did the ad money.

Looking back, Bennett has no regrets. “I’d gotten lucky,” he said. “I got this taste of making money while writing my own music—I’ve always tried to pursue my own projects and get my own gigs—but the jingle business in Chicago just dried up.” Bennett said that’s when he decided to make changes and take big risks—being subordinate and leaving Chicago—for a crack at working with pre-comeback Beach Boys co-founder Brian Wilson.

“I met Brian in Chicago,” Bennett recalled. “He just wanted to get away from L.A., so he’d bought a house in St. Charles, where he’d built a state of the art studio in the basement. His producer had me play guitar on two cuts for his 1998 album, Imagination. Once Brian lived through one winter in Chicago he said: ‘it’s time to get back to the sun’.”

In short, it was time to leave for southern California.

The risk, the move and the partnership paid off. Bennett recently finished a world tour with the reunited Beach Boys, with whom he’s spent years touring and recording, singing and playing keyboards, guitar and drums. At one point, Wilson told Bennett that he’s “the most talented musician I’ve ever met.” He asked Bennett to write lyrics for two unfinished George Gershwin songs for his Gershwin album. Bennett performed at the 2012 Grammy Awards with the Beach Boys and Maroon 5. He’d already taken a Grammy home for his work on Wilson’s 2004 album Smile and Bennett co-wrote, co-produced and mixed the best-reviewed album of Brian Wilson’s career, That Lucky Old Sun.

Growing up on the North Shore, a fact which Bennett admits tends to be met with prejudice, helped shape his music. “I wrote some of my earliest songs about my mom, who had this list of things to do every day. She wasn’t really emotionally available to me, but she supported us.” Bennett paused to think about those days, adding, “we rented a two-bedroom place with no second floor and no basement across from Mallinckrodt, so I was always a little resentful that the Chicago [rock] press had a chip on its shoulder about A Fine Mess being this spoiled North Shore band. I’d written all these songs and I was making my own posters and doing everything on my own. But you tell people you’re from Wilmette and there’s this stigma about having everything given to you, which I didn’t.”

Bennett said he misses northern Illinois. “It’s beautiful—the Art Institute, the Field Museum, the culture—and there’s a foundation there. I miss the change of seasons. I miss the architecture. My dad worked downtown so my favorite thing was [taking] the Sheridan Road drive coming up to the [sight of the] John Hancock Building.”

Artistic pursuits, he says, are still a struggle. “You reach a point where your art becomes survival,” he said. “When you’re going after it, you don’t have a lot of time to be an artist anymore and it is getting harder as a musician to pay the bills. I just came off of six months with the Beach Boys and I should have a lot of money in the bank but I’m not the one making money off t-shirts and hats and programs.”

An eighth grade drum solo first spread the word about his talents—and he says it’s been more or less uphill ever since. “You’re never prepared for show business,” he said. “There’s no sense of security in the music industry and it’s worse than it’s ever been. So my biggest advice to people going into the music business is to be prepared—when you think it’s going well, prepare for it all to be shut down next month. Some people always manage to land on their feet, like Chris Holmes, the Lake Forest DJ and musician, who’s just fortuitous, but it’s not a steady stream of work for most.”

At that, Scott Bennett, still prone to get up and play guitar, launched into a description of his next project. “There is a Chicago supergroup that finally finished a record ten years in the making—so I might as well tell you about it,” he confided. He said that his new group, called Shiny, features Matt Walker, formerly of the Smashing Pumpkins and now playing with Morrissey, on drums, Brett Simons, who’s played with Melissa Etheridge, on bass guitar, guitarist Danny Shaffer and Jim Dinou, whom he refers to as another Lake Forest whiz kid. “Shiny is the stuff I’m the most proud of,” he said. “It’s very [David] Bowie influenced, with a little Muse and Radiohead influence, and the album comes out soon. We’re waiting to finalize the cover art and put it on iTunes.”

This article was published in The North Shore Weekend in 2013.