Composer Michael Giacchino on the Art of the Movie Score

Composer Michael Giacchino (Star Trek, Jurassic World, Up, The Incredibles, Inside/Out, and Zootopia) discussed “The Art of the Film Score: Creating Memories in the Movies” in an exclusive Turner Classic Movies (TCM) program recently at the TCM Classic Film Festival in Hollywood. 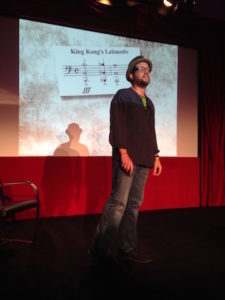 Beginning with a clip of 1933’s King Kong featuring Max Steiner’s score, Giacchino explained that he sought to share, highlight and examine what he calls the most emotionally moving images from film and demonstrate how these images are memorably interwoven with musical scores or songs.

Using King Kong, personal memorabilia, photographs and a Star Wars-themed amateur movie he made as a kid, as well as instructive and humorous clips, tales and character themes, Giacchino delved into movie music’s secrets, subtlety, strength and “the craft required to balance the complex relationship of music, images and sound.” Appropriately, he also showed clips from Disney/Pixar’s hit about a child’s conflicting emotions, Inside/Out, as he explored how to induce the audience’s emotional response.

Having scored some of the most popular motion pictures in recent years, including Ratatouille, Dawn of the Planet of the Apes and Mission Impossible: Ghost Protocol, Giacchino proceeded to carefully excerpt portions of Disney/Pixar’s 2009 hit, Up, for which he earned an Academy Award.

First, sampling an extended part of the animated film without music, Giacchino showed a movie scene without sound. Then, showing the same scene with his musical score, Giacchino showed how adding music enhances Up‘s sense of triumph and adventure. With the audience agreeing and applauding, the Grammy-winning composer then explained how both he and the movie’s director, Pete Docter, agreed that Giacchino’s score in that clip was still lacking and somehow deficient. Finally, Giacchino played the same scene once more, this time with the picture’s final score, to further demonstrate and drive home how the composer addressed the need for a stronger emotional response, thus improving Up‘s musical score. 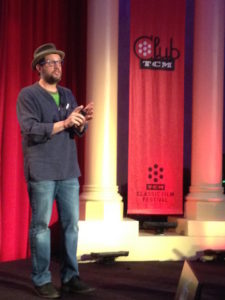 The audience could hear the difference and delivered another round of applause.

Giacchino, who said that he began filmmaking in his backyard in New Jersey, detailed his approach to composing themes and cues for motion pictures and displayed footage of him working with Pixar director Docter for Up and Inside/Out. The presentation finished with a short reel he’d made during a tour of Stan Laurel and Oliver Hardy movie locations, which brought Giacchino’s amateur filmmaking backstory full circle.

In fact, the Oscar-winning composer’s career covers a range of movie jobs. After attending New York City’s School of Visual Arts, he was hired to work in marketing at the Walt Disney Studios and only later did Giacchino study music composition, taking classes at Juilliard and UCLA. Catching the attention of DreamWorks chief Steven Spielberg, who hired Giacchino to compose what became the first PlayStation game with a live orchestral score, he continued scoring video games, including Medal of Honor, and his efforts earned interest from director J.J. Abrams, which led to Giacchino scoring Abrams’ Lost, Alias, Mission Impossible III, Star Trek, and Super 8.

This article originally appeared on LA Screenwriter in 2016.