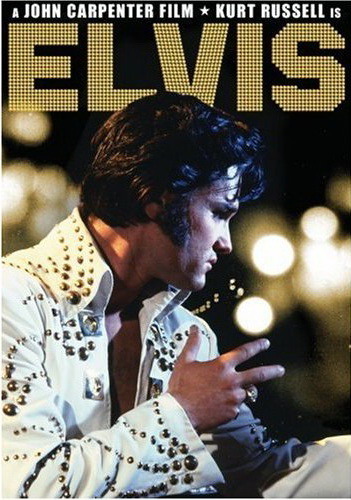 Two years after the 1977 death of Elvis Presley, ABC aired an excellent movie called Elvis (click on the image to buy the DVD). Made by Dick Clark Productions, directed by John Carpenter (Halloween, Assault on Precinct 13, Escape from New York) and starring Kurt Russell as Elvis Presley, the telefilm was an immediate ratings winner. At the time, it received critical praise, too.

The accolades are well deserved. This is an exceptional movie, whether you know or like Elvis Presley and rock-n-roll or can’t stand either. The film begins at the beginning of the end of his extraordinary life and career, in Las Vegas on July 26, 1969. With an assassin lurking, the king of rock-n-roll, strung out on a drug addiction that apparently went unchallenged by his extensive entourage, finally succumbs to the pressure and erupts in his hotel room, aiming a gun at a television set and pulling the trigger.

How he came to that particular state is the tale this picture aims to tell. Carpenter flashes back to 1945, when the boy whose twin brother Jesse had died was bullied and beaten and sang with soul a religious tune about the river Jordan. The poor boy in sideburns existed with his parents, Vernon (Bing Russell) and Gladys (Shelley Winters), at the mercy of government housing subsidies in Memphis, where the Presleys were evicted for making too much money. With a soft, gentle voice, the only child sings about a dog, learns about balancing romance and career with his first girlfriend and becomes an electrician. Elvis, who emulated both Gary Cooper and Captain America and had his father’s full support for an artistic career, originally wanted to sing in a gospel quartet.

Listening to Negroes sing on radio and at a music store, he famously finds his way to the Sun recording studio in Memphis and, when stardom beckons, he displays loyalty to the studio and to the businessman who gave him a crack at recording there, Sam Phillips. It’s all here in terms of the legendary ascent of the world’s original rock star, from Hollywood producer Hal Wallis and CBS television host Ed Sullivan to the man who guided his career, Col. Tom Parker (Pat Hingle) and his forced service in the U.S. Army. Classic rock songs are well represented by Kurt Russell, a former child actor who had appeared in pictures with Elvis and delivers a magnificent performance in an underrated motion picture career. Russell has his speaking voice down pat and, though the choreography is overdone, his movements are limber enough to evoke the sensuality. He retains his magnetism and tenderness without sacrificing the portrayal of Elvis Presley as a Southern loner who related to the world primarily through performing a unique hybrid of country music and rhythm and blues as something sacred.

The 170-minute Elvis moves briskly but not too fast. By the time his mother, whom he called “Mama” in that Mississippi drawl, gets sick and dies at the age of 46, her gentle son’s incredible worldwide fame in what was a new form of post-industrial modern music was on a collision course with a healthy and proper development and balanced way of life, as widely known and depicted here.

Elvis is never salacious. Written by Anthony Lawrence, an Elvis movie screenwriter who had also been a singer, and dramatizing Elvis Presley’s Army barracks partying in Germany in 1958 after his mother died, the story adopts an intimate, character-driven approach based on what molded the poor boy with a sad past and an ability to express himself with sincerity. Elvis is depicted as playing “Unchained Melody” to woo Army brat Priscilla Beaulieu (Season Hubley), a child whom he met in Germany and courted with a countryside picnic until winning the approval of her father when she reached the age of consent. It comes off here as an ultimately doomed Freudian projection over the loss of his mother. Contrary to a later depiction in Walk the Line, there is no sign of drugs in the early, meteoric part of his career.

But disorientation and distortion are clearly factors, as Elvis creates a compound in Tennessee which all but solidifies the sycophancy and alienates his young bride. Feeling remorse and lacking a sense of proportion and communication skills, he impulsively fires everyone. In one powerful scene, while watching James Dean, he fantasizes about having “one day when I [don’t] have to be confused…” As dysfunction becomes more apparent, and Elvis becomes more flamboyant, displaying erratic and at times violent behavior as others assert control, his impossible dream of a bucolic life with a docile, kept woman is shattered by a stillborn child and Priscilla’s emerging demand for autonomy. As the kingdom comes undone, Elvis, speaking to his deceased twin brother Jesse by the shadows, seeks mystical revelation in an extended, sad climax. It happens with the 1969 recording—at the leading edge of the loss of America’s innocence—of his incisive rendition of “Suspicious Minds”. The scenes, achingly depicted by Kurt Russell, foreshadow the death of the last of three innocent yet sensual American icons—Marilyn, James Dean and Elvis—who were a warming of the cold, repressive strain of Puritanism in the West.

Elvis has flaws, namely nothing of his remarkable “Love Me Tender” and not enough of Graceland or distinctive albums and images. Director John Carpenter with Kurt Russell’s precise performance may have consciously avoided well known material to recreate Elvis as the exciting, talented and sensual new artist he was in a world not yet ready to possess what he so tragically came to disown. 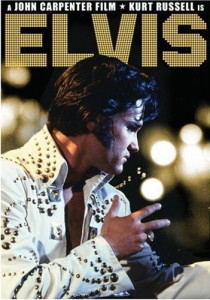 Special features on the DVD edition of Elvis (click on the image to buy) include Bringing a Legend to Life, which is memorable for director John Carpenter talking about his integration of Elvis Presley’s public and private lives for this seminal 1979 movie. Viewers also see Kurt Russell (Silkwood, Executive Decision, Miracle, Escape from New York, Stargate) in his dressing room talking about preparing for the role of a lifetime as the king of rock and roll. The featurette includes actress Shelley Winters (Lolita, A Place in the Sun, The Poseidon Adventure), who claims to have known Elvis when he was going out with Natalie Wood, commenting on his driving a white Cadillac and with light hair which he dyed black to be like his mother (whom Winters portrays in the film); Elvis apparently asked Priscilla Presley to dye her hair black, too.

Carpenter also discusses his decision to portray the singer, guitarist and actor as a mythical figure and what he thinks is his responsibility as a filmmaker not to exploit Elvis Presley. Carpenter says he’s just telling Elvis Presley’s story. This he does in Elvis, thanks to Mr. Russell, with whom he worked in Big Trouble in Little China, Escape from New York and the sequel, Escape from L.A., and it is well done. The disc, produced by Dick Clark Productions in Santa Monica and distributed by Shout Factory, includes clips from Dick Clark’s landmark rock-n-roll performance series American Bandstand, with Dick Clark talking about a contest to book either the Beatles or Elvis Presley; they decided to book both, with Elvis appearing on July 4, 1964, and the Beatles three weeks later. Dick Clark also interviews female teenagers about Elvis with some background material about Elvis getting married and bits on his film co-stars Barbara Stanwyck and Ann-Margret. A photo gallery includes a couple of snapshots of Elvis in motorcycle gear apparently from scenes on one of his pictures which were not used in the film.

Overall, this ample disc is a must-have for any serious Elvis Presley fan’s collection. For the telefilm Elvis alone, the DVD is one of the essentials for anyone seeking to study and examine 20th century popular culture, especially fans of rock and roll.