The inevitable publicity surrounding Steven Spielberg’s upcoming Munich vividly recalls that West German city’s Summer Olympics in 1972. It was during the Cold War. Olga Korbut was prancing around in her white Soviet leotard—American Mark Spitz, a Jew in Germany, was swimming his way to seven gold medals in his red, white and blue Speedo—and an Arab terrorist was pacing on a balcony in a mask. 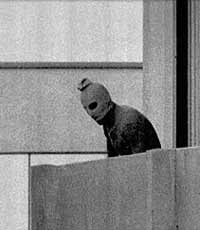 Calling themselves Black September, a gang of thugs jumped the Olympic Village fence, seized 11 Israeli athletes, coaches, and a referee, murdered those who fought back, and held the rest prisoner. Hours later, during the West German police’s failed rescue operation, the terrorists killed every Israeli. According to one of the terrorists, the late father of Arab terrorism, Yasser Arafat, planned the hit. It was an act of war.

Only it wasn’t treated as such. The attack by Arafat’s group and the response foreshadowed today’s war against their Islamic radical brothers; the coordinated strike against innocents, the West’s tacit appeasement of the enemy, the besieged nation’s refusal to declare and wage war against the terrorist attack’s state sponsors, choosing to pick off lone terrorists instead.

The results were as useless then as now: the Munich attackers were allowed to escape after more terrorists hijacked a passenger jet. The murdered Olympic Israelis would be among the first of thousands more to die. Terrorist Arafat would be praised by Western leaders. Arafat’s goals—a Palestinian state, a fractured Israel, endless suicide missions—have become reality.

The siege at Munich is the subject of One Day in September, a 1999 documentary narrated by Michael Douglas and it is dramatized in the 1976 television movie, 21 Hours at Munich, finally available on DVD. A third movie, the three-hour 1986 TV movie, Sword of Gideon, also on DVD, covers Israel’s response. Like Spielberg’s Munich, Sword of Gideon, is based in part on Vengeance by George Jonas, purported to be an account of Israel’s assassination campaign.

Sword of Gideon recreates the Munich massacre in brief introductory images, which make the incompetent West Germans look downright purposeful, and it is the only one to dramatize Israel’s retaliation. Steven Bauer (Scarface) and Rod Steiger (Doctor Zhivago) are good as Israelis, and Michael York (Cabaret) plays it cool as an explosives expert. The digitally mastered DVD includes the movie—which contains a deliberate shot of the Twin Towers, giving the events depicted an eerie sense of futility—with no extras.

21 Hours at Munich stars Shirley Knight (As Good As It Gets) as an Olympics bureaucrat who negotiates with Franco Nero’s lead terrorist, with William Holden (Stalag 17) in his Network-era prime, as the title city’s bumbling police commissioner. The movie is mediocre, failing to contrast the tension with the excitement of the Olympics, which, officials decided, had to go on. But it has merit, showing that the West Germans—against the advice of an experienced Israeli (Anthony Quayle)—made staggeringly bad judgments.

The Munich Olympics massacre of September, 1972, is accounted for in the forementioned documentary One Day in September, which includes an interview with one of the terrorists. Director Kevin Macdonald recreates those harrowing hours with enough clarity to show that the cause was an act of pure barbarism.

Here’s hoping Steven Spielberg in his film Munich does the same.

This column was published on December 8, 2005 in the author’s name and posted on Box Office Mojo prior to the Spielberg film’s release