Returning to the movies with Robert Redford (The Sting) riding high, director Lasse Hallström (Chocolat) makes the most of An Unfinished Life. His first film in four years—The Shipping News was released in 2001—is, like his previous pictures, a higher experience. 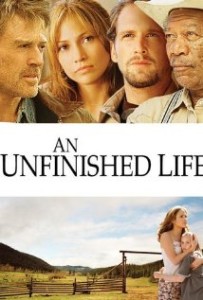 With writer Mark Spragg’s dusty Wyoming landscape in a family ranch tale co-written by Virginia Korus Spragg, Mr. Hallström gets going early with the undulating rhythm of four conflicted lives. Their stories unfold on a weathered farm in a little valley, away from the world.

That is exactly how Mr. Redford’s cranky cowboy, Einar, likes it—he’s a wrinkled sourpuss who can’t stand other people and he has his reasons. Saddled with a crippled ranch hand named Mitch (Morgan Freeman, perfect in every scene, reunited with his Brubaker co-star), a dead son buried out back and carrying a lifetime of shame, Einar tends to the place as if he’s nearing an expiration date. Mumbling to himself, milking the cows and guarding his secrets, Einar literally wants to die.

Along comes battered Jean (Jennifer Lopez, the movie’s weakest link), who happens to be Einar’s daughter-in-law—she was married to his dead son—toting her kid, played by Becca Gardner, outstanding in her first motion picture. Sporting a shiner from her boyfriend’s fist, Jean needs a refuge from her abuser (Damian Lewis) and she shows up at Einar’s ranch. The ruddy old coot grunts and chucks Jean and the twerp in the basement.

Everyone is abused in this movie but—and this is Mr. Hallström’s specialty—everyone wants it to stop. Besides the lovable, irritable Einar, cowboy-booted Jean is coming home to the town where her hardworking parents sought a better life, and she must learn to stand alone. Her daughter, a near-savage girl-child when they flee the abuser, must embrace maturity and Mitch, with knowing eyes and loyalty to his friend, must come to terms with having been mauled by a grizzly bear who still roams these parts (the bear is not the only danger.)

Practically on cue, the grizzly is intended to represent much more and, as An Unfinished Life touches on loss and forgiveness, it is primarily a lesson in letting go of what is beyond one’s control, a sort of setting free the bears minus John Irving’s absurdities. Though this is not everybody’s cup of tea, (it is obviously mine), watching these masters—Messrs. Redford, Freeman, Hallström—is a value unto itself.

When it works, which it mostly does, An Unfinished Life is close to sublime. Mr. Hallström on a bad day is better than most and, using a textured approach, he evokes America—the West—in her prime: the self-made man, working from sunup to sundown, taking life seriously, playing cards with dry humor and riding a horse with an upright posture. As he has done with a creaky French village, the golden Midwest and the splendor of an apple orchard, Mr. Hallstrom immerses us in the rigors of life in Wyoming and the movie even sounds like poetry, with characters talking in that uniquely clipped mountain tone that aims to get the job done.

As the recovering victim, the miscast Lopez doesn’t measure up. Jean is a crucial part and the actress is a wooden, strained presence that cheats the movie of its charms. During an important reconciliation—prepped by Camryn Manheim as a waitress—Lopez is as warm as a cornered cougar and her performance holds the story hostage to her relationship with the town sheriff (Josh Lucas).

Mr. Redford, whose Einar sizzles about taxes, government and Hollywood Westerns—and spits the movie’s funniest line about God —is a genuine star and, lately, there are few places to shine. He hasn’t had a part worthy of his ability in years. In Mr. Hallström, he has found an artist who shares his appreciation for simplicity, individualism, and the virtues of the great American cowboy, which he brings to a fine, memorable finish.

This article was originally published on Box Office Mojo in 2005.