The Curious Case of Benjamin Button

The Curious Case of Benjamin Button, written by Eric Roth (Munich, which was morally repugnant) and directed by David Fincher (Zodiac, which was miserable) is breathtaking and, on purely cinematic grounds, it is a grand three hours, as the tagline says, of life measured in moments. 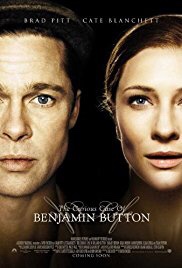 The movie unfurls as a realistic love story with elements of fantasy. Yet it is pegged to reality, softly stroked with romanticism—not a speck of anything rotten—and, despite its deterministic bent, it’s an appeal to live in alignment with reality and embrace the here and now, like a visualization of the Serenity Prayer (“God grant me the serenity to accept the things I cannot change; courage to change the things I can; and wisdom to know the difference.”)

Bookended by an adult daughter (Julia Ormond) reading an old diary to her hospitalized mother (Cate Blanchett), the lead character, Benjamin (Brad Pitt), ages backwards, as most readers probably know. That alone might be tempting to discount as an irritating contrivance and one does try—some readers will undoubtedly succeed—but, for those willing to play along, the twist is its own reward. One waits for a manipulation that never comes. In this sense, and I am still thinking about this, Benjamin Button embroiders the theme that love is eternal.

This sprawling picture—which I had the pleasure of seeing in the Hollywood ArcLight’s Cinerama Dome—tends to sound like a flight of fancy, which is probably why it’s taken so long to make. Leave it to the able Kennedy Marshall Company to produce the F. Scott Fitzgerald story adaptation for the screen. Their work—and Frank Marshall and Kathleen Kennedy make daring choices—represents Hollywood at its best.

The Curious Case of Benjamin Button is another example. The movie’s packed, not overstuffed. From the birth of a child with cataracts, abandoned at an old people’s home and taken in by a kind, steely Christian to a swirling seastorm during the daughter’s hospital visit, story and pictures open and close, again, and again, yielding learned trades, opening nights, patriotic proclamations and everything from Ivanhoe and Rudyard Kipling references to tattoos, tugboats and rocket ships. In between, there are missed opportunities, fresh insights, and majestic scenes, making Benjamin Button an opulent gesture toward what Hollywood, sadly, lacks: the larger than life—elegant, colorful and the opposite sensibility of No Country for Old Men. 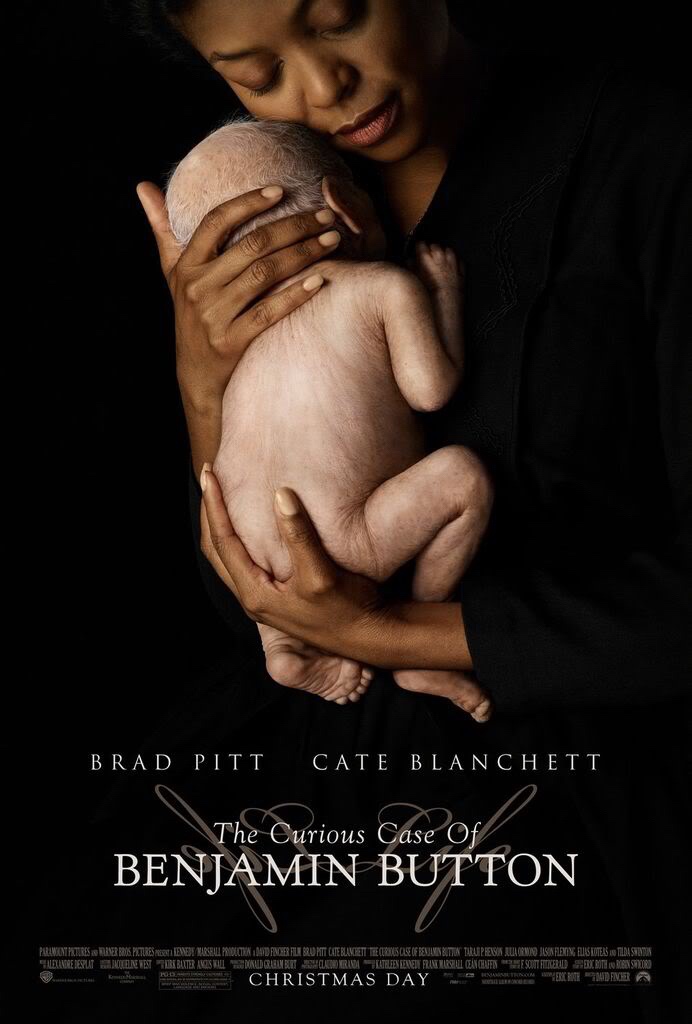 Through makeup and effects, Brad Pitt as Button, whose blood father makes a fortune from making buttons, and Cate Blanchett, who plays the woman with whom Benjamin falls in love, age backward and forward, respectively, until they meet in the middle and enjoy their bliss. Given his unique condition, their relationship is limited, and this is less to say that love and happiness are fleeting than it is to show that one cannot evade reality, so one mustn’t try—it is better to make the most of it.

That’s it, really, which is simple and utterly engrossing in Mr. Fincher’s hands and he has previously worked with Pitt (on the gruesome serial killer movie, Se7en) and created several of the most striking, evocative music videos (“Freedom ’90” for George Michael and Madonna’s better Nineties shorts, including “Vogue” and “Oh Father”). The images—the eerie aftermath of battle, a quiet coastal outpost, a ballerina in motion and the spectator who gazes upon her—are splendid.

Like the Marshalls, Pitt and Blanchett are known for bold career choices and they do not disappoint. They exercise necessary restraint for a visual showcase on this scale, though they portray characters worth caring about. His Benjamin is at once implacable and intense, fully confident yet distant and perfectly suited to a live-wire like her Daisy, a dancer who’s reedy and strong and reduced to putty in his presence. Thanks to the actors, even when the script all but calls for playacting, Daisy’s impetuousness gives way to loyalty and Benjamin’s solitude yields to intimacy; they belong to each other.

Neither character is exactly heroic. He loses his virginity to a prostitute and she’s as loose as she is limber. He borders on being aimless and she is often clueless. Though he falls for an iceberg of an Englishwoman (Tilda Swinton) and Daisy gets pregnant at 43, when that would have been considered highly suspect, the plot progresses with remarkable economy. Each travels his or her journey—admirably, they put themselves first—and their bond is repeatedly tested. When Daisy prematurely offers herself, he resists. When Benjamin pops up unannounced, she asserts herself. When either one falters—and they do—the other rises to the occasion, even when that means making difficult choices, as when, wordlessly, he comes to her side and, wordlessly, she learns to let go. What they have is theirs and they guard it. That they have it at all is a risk they’re willing to take.

Mythology kicks in under dire circumstances, as a marker of one’s highest values, not as a mitigation of disaster, and this comes after Benjamin and Daisy have experienced life in its riches and indignities—breaking free, losing a loved one, dancing barefoot, reconciling a parent’s limits, letting go and finding new passions—and their story is contained within a fable about a man who vows to stop the clock and turn back time.

Of course, that’s actually neither possible nor desirable. Reality is what it is (here it is partly pre-determined), life is finite, and one ought to live in the moment—this is why audiences coming out of the theater feel good. You will, too—though one knows that the moment will eventually end. So will The Curious Case of Benjamin Button, which enchantingly rekindles one’s curiosity and wonder about life in the largest, and most magnificent, sense.