Released in black and white over 60 years ago, Howard Hawks’ 1948 Western, Red River, starring John Wayne at his best, is a masterpiece. Based on a piece of fiction in the Saturday Evening Post by Borden Chase, who also wrote the screenplay, Red River captures the American spirit. It is an epic about earning respect, love and money.

Opening with a wagon train heading West, the plot is deceptively simple. A big, strapping man named Dunson (John Wayne) breaks away from the line, declaring, “I’m starting my own herd.” Paired with his workmate, played by Walter Brennan in one of his best performances, Dunson is rational; he has surveyed the land and he figures this is near a good spot.

Dunson, who leaves his woman behind thinking she’s too soft, is also rationalistic, mistaking delayed gratification for postponed happiness. A scene or two later, there’s smoke in the distance and, soon, Dunson and his pal are literally under fire from the Indians. The duo fight them off—with Dunson killing his first redskin in the Red River—but the wagon train has been wiped out and his lady in waiting is gone. All that’s left is a bracelet that once belonged to his mother. 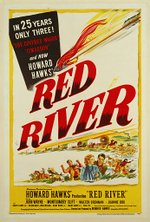 Dunson dusts himself off fast—too fast—and the rationalist becomes a narcissist, really, which won’t help because the work will be hard. When a boy named Matt, having survived the Indian massacre, wanders into Dunson’s path, Dunson notices the kid’s potential. In classic John Wayne drawl, Dunson tells Brennan’s character: “He’ll do.”

The years pass in a diary-style narrative and Matt has grown into a fine, if passive, young man played by Montgomery Clift in a first-rate motion picture debut. Of course, the adoptive son’s measured approach clashes with Dunson’s, a difference that becomes apparent during a cross-country cattle drive. The men recruited for the grueling work are framed in quick close-ups as individual cowboys, yelling “Hee-yaw!” as the action begins.

The thunderous drive is breathtaking. Hawks (Rio Bravo, Bringing Up Baby, Only Angels Have Wings) is one of the greatest directors and this brilliant movie is proof. The river crossing in particular is astonishing, moving hundreds of horses, wagons, cowboys and cattle across rushing waters in real time from every angle, conveying the danger of such a feat and therefore the heroism of the American cowboy.

Dunson and Matt are joined by a cocky, competitive cowhand called Cherry Valance (John Ireland) and a familiar crew, each playing a unique role in the exciting journey. Red River depicts American West ideals—self-interest, individualism, capitalism—in action. Making and spending money is practically celebrated, from an Indian seeking maximum value who partners with Brennan’s old cuss to a stuttering young cowboy who aims to buy a gift for his wife.

In fact, the most favorable characters are the ones who try hardest to make money—and the lone businessman (Harry Carey Sr.) in Red River is not only generous, offering to buy a round of drinks, he’s also observably happy, thrilled at the sight of another man’s achievement and delighted to offer the best price. Doing business is a joyful enterprise.

Dunson, who is not fully sympathetic, has honorable intentions—there’s plenty of truth in what he says, even when he’s at his worst—and this is a credit to John Wayne’s ability as an actor. The struggle during Red River involves the brash, short-sighted style of the father figure and the thoughtful, longer-range view of the young man and, when their interests collide at a critical junction for the cattle drive, it’s not at all clear what will happen.

But it’s pretty obvious that Matt and Dunson love one another, which, if it weren’t for Mr. Wayne’s commanding presence and subtly convincing portrayal of old man Dunson, might have drained the conflict from the picture. This is about the time that Joanne Dru’s character, Tess Millay, enters the movie, defending herself against an Indian attack on her wagon train. Tess represents the pioneer spirit, too; a woman who refuses to live in fear and it’s Tess who more or less resolves the remaining conflict and calls upon the men to stop behaving like a couple of monkeys.

Tess falls for Matt and the love of a good, strong woman shakes the young gun out of his anxious state. Matt comes to life, rejecting Dunson’s narcissism (to Tess: “I like [talking to you] better than talking to a mirror”), embracing real intimacy with a woman and acting decisively in a crisis. The showdown between father and son culminates in a psychologically complex display of love and fearlessness. Everyone emerges a richer person.

With Dmitri Tiomkin’s stirring score, a great cast and the twin giants of John Wayne and Howard Hawks at their personal best, the ingeniously constructed and visually gorgeous Red River, which is about earning one’s values, deserves its outstanding 60-year reputation.

This article was originally published on Box Office Mojo.

Click on the movie poster to buy the movie on DVD.