Pixar’s animated story of a rat that strives to become a top French chef, the irresistible Ratatouille, is pure summer entertainment. Pleasantly light and amusing, it’s a visually appealing tale of work and luck as the key to success.

The rat is Remy, a slimmer rodent than one might be accustomed to spotting in an alley, and his blue hair defies reality. But Remy’s facial expressions—especially while he’s chewing something delicious—and body language cast him as the anti-Templeton (that fat, nasty rat from E.B. White’s Charlotte’s Web); Remy’s another adorable misfit. 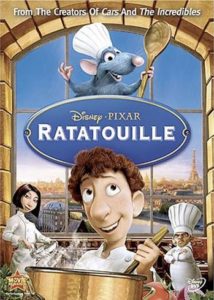 He walks upright, eats only the finest foods, and he admires human beings because “they discover and create,” an attitude that’s rare among humans, let alone French rats. His love of food—and it is love, not fixation, lest health-conscious parents worry about an animated endorsement of overeating—leads to his search for saffron, which disturbs a gun-toting granny, which leads to Remy becoming separated from his family.

That’s not necessarily bad, because Remy’s kin are completely unsupportive of his interests and goals. Besides, they steal their food, while Remy prefers to cook his food (though he isn’t past petty theft). His hero is a master chef named Gusteau, the recently departed proprietor of his own restaurant. After Remy floats along with Parisian sewage, Gusteau’s spirit becomes his guide.

The rest of Ratatouille is enjoyable and watchable, with Remy surfacing in Gusteau’s restaurant, latching onto a human boy and, perched on his pal’s head underneath a hat, cooking by pulling the boy’s hair as a signal. The animation—color, action and details—is outstanding.

Conflict comes in the form of an evil chef who harbors a secret about the boy, romance in the person of a salty female cook and resolution is achieved through a subplot involving a food critic voiced by Peter O’Toole. Ratatouille puts them each to good use; no one exists to tell jokes—each character suits the story.

As it is, the story is secondary to the action, which is a treat, whether someone’s being chased through Paris—reverently recreated in blue with glimmering lights—coasting through the kitchen or preparing a gourmet dish with seconds to spare. Like writer and director Brad Bird’s The Incredibles, it’s wonderful to sit and watch.

Other nice touches include inventive use of everyday items like tealights, ladles and antenna to promote the story’s progression, and Michael Giacchino’s jazzy mix that uses accordions and guitars. Crisp writing is purged of popular cultural humor, though a line about a well-known chef hit the funny bone.

When the notion of a rat in the kitchen meets reality, the story sags. The kitchen’s hierarchy, introduced with wit, disappears into oblivion, Remy’s family gets an unearned pass and a feminist diatribe erupts from nothing—and don’t expect to learn why Remy likes, makes or does anything. Like The Incredibles, his skill is more bred than acquired. Watching him use it is Disney/Pixar’s summer gift.

This article was originally posted on Box Office Mojo in 2007.