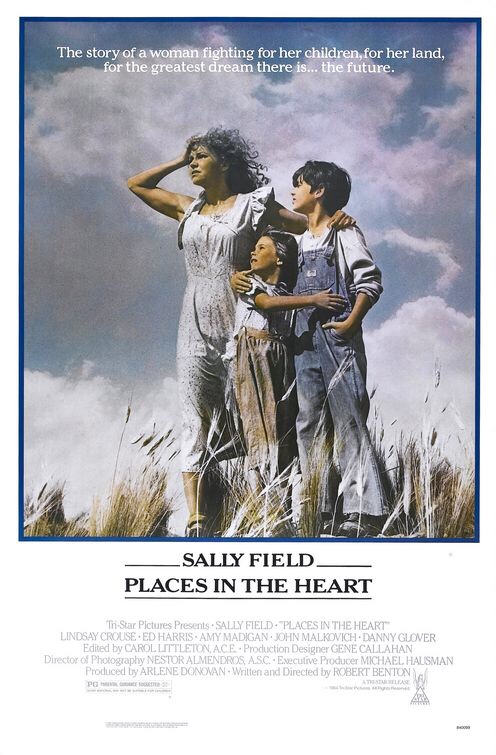 For a thoughtful, feel-good movie about making and remaking the soul, writer and director Robert Benton’s Places in the Heart provokes and inspires. This is Benton’s salute to America’s heartland.

Starring Sally Field (Forrest Gump, Absence of Malice) in the leading role, which is a career-best performance (not confined to expressions of grit), with music by John Kander (Chicago, Cabaret), Places in the Heart is not the typical save the farm picture. The Eighties drama was lumped into this unfortunate genre at the time of its release. The movie’s Norman Rockwell-style marketing stills may have contributed to this impression, however, warm and homespun this is not.

Places in the Heart opens with the striking cinematography by frequent Benton collaborator Nestor Almendros (Billy Bathgate, The Blue Lagoon, Still of the Night) with pictures of open fields, a church and Jesus Christ, signalling that the starting point for this particular place rests upon a harvest of nature’s bounty, religion and faith (though strictly by what the filmmaker means by each). Benton lulls the audience into an easygoing surrender to the sight of the familiar. Then, after establishing that this is 1935 and the midst of the Depression, the place shifts to a railroad track following the sound of gunshots and a rumor that there’s “a drunk Negro down by the tracks”. Within minutes, the shock of a mindless use of force, a Robert Benton imprint, becomes clear as the town’s handsome sheriff is shot dead. A short time later, the Negro child is dragged. Then, a band of Negroes take the hanging boy down. Everyone in town, white and black, proceeds.

This is the status quo.

But, in the heart of the woman in love with the good-looking policeman, things as they are and have always been have died. With Sally Field deftly portraying the stupor that results from losing one’s love to sudden death, and the uniquely transformative power of a widow’s grief, Benton unfolds his signature story of the individual who smashes the status quo. That she does it by necessity makes Places in the Heart more credible, more persuasive, more potent. This is not a farm woman seeking to change the world. Ms. Field’s character’s motivations are her own life and the lives of her children. She simply discovers that, in order to remake her widowed life and parenthood, the town she’s always lived in, where her late husband kept law and order, will never be the same. If this means breaking new ground, so be it.

Watching Sally Field’s lawman’s widow and mother forge ahead to challenge things as they are in Depression-era Texas, where New Yorker Robert Benton comes from, it is easy to see what you want to see. The black man (Danny Glover) who comes, begs and steals from the widow. The sister who looks down upon the beggar. The blind man (John Malkovich) whose banker brother trades him for a better deal on the farm to hold off foreclosure. The bigoted villagers who might take pity on the poor, lonely widow but turn her away in her hour of need or judge her efforts based upon racism, prejudice and, especially, being radical in changing the way things are. Or the ominous and barely noticed threat of the Ku Klux Klan.

It is easy to see those plot points. The audience is cultivated to see them to the exclusion of deeper insights. This is thanks to the gracious and subtle performances of the cast as the woman’s blended, chosen and self-made family. The blind and black men do everything for her from cook, clean and care for the children to making dolls, bestowing gifts of luck, affection and badly needed notice of the hardened woman as a woman — and, crucially, in a powerful subplot which takes measure of how collectivism spoils, ruins and crushes the individualist, press the idea of a whole new free market enterprise. One of the greatest unnoticed and unsung aspects of Places in the Heart is its reverence for capitalism. Glover’s Moses begs and steals but he also atones, compensates and earns the lady’s respect, proposing the radical idea of creating a cotton farm.

So, while the audience may take notice of the town’s smallness, also tested by two married people (Amy Madigan and Ed Harris) cheating on their spouses in a pivotal subplot, contrasting the widow’s muse and larger than life visionary, Moses, and the blind man who mostly wants merely to be left alone, the imagination keeps yielding to the harsh reality of what’s on screen. If it’s not at all sentimental, with Sally Field wearing a scarf and kneepads and hiring extra hands to pick the cotton in time to beat the competition to market, striking her wayward child into her own rightful shame and steeling herself to trade, negotiate and hold firm to get the best price for her cotton — on the merits of her argument, not the fact of her sex, let alone pity, alms or seduction — Places in the Heart shows the softer side of a chosen family in sharp contrast to the hardness of a family based on blood.

In one scene, for instance, Malkovich’s “cripple” demands that his private property be respected. That he does this as a trade, barging in on the wornout widow while she’s taking a bath, underscores the point. In another scene, a storm and twister throw the town into a tailspin that seals the strongest, fittest family ties (someone screams “I gotta get home!” as the skies turn dark) and splits apart the town’s weakest breaking points with explosive violence.

Wreckage of the town in the storm’s aftermath foreshadows brutality which begins with the sound of trucks. The violence with which Places in the Heart begins returns in earnest, serving to close a chapter with a resolution which is poignant and realistic. But the movie endures because it goes on, closing a loop with a reading from the Bible on love as being grounded in patience, perhaps suggesting that the patience of true love seeds the best of what one hopes and wants for the future. In fact, Robert Benton leaves matters with a reference to “the love which never ends”. By then, and this is the poetic aftereffect of his Places in the Heart, the cotton farmer, the hobo, the caretaker and the children quietly gain and seek communion in what is outwardly a display of faith which may, by secular reckoning and borrowing a thought from Ayn Rand, be taken as a kind of living in the future one dreams about — today.