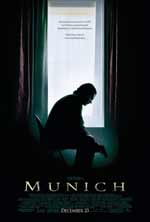 Mr. Spielberg sets the stage with the Olympics massacre, which is offered in neatly compiled flashes, showing enough for those born after 1972 to figure that Arab terrorists—Palestinians, whose role and motive is as muddled as the movie—murdered several high-profile Israelis. Though limited in scope, it recreates the heinous event.

Having depicted the Palestinians’ initiation of force, Mr. Spielberg introduces Eric Bana (Troy) as Avner, the field commander of the assassination squad that Israel dispatches to retaliate against the Arabs. Though Avner’s wife mutters something about the state of Israel being like his mother, Munich promptly ignores an important question: why Avner chooses to accept the assignment, which is offered under the murkiest circumstances.

Instead, Mr. Spielberg, using father-to-be Avner as the focal point, runs out the clock on nearly three hours of equivocation over a seminal act of war. Like the overpraised Schindler’s List, Munich ultimately evades mass murder and promotes Jewish tribalism.

How else to explain the moral equivalency he grants to Palestinian terrorists who, we are asked to believe, are double-booked into the same safe house as the Israeli hit squad, sharing space and debating politics like cafe society chums while facing off over warring tribes’ music—settling on American pop? Or that we are asked to pity the terrorists at every turn—and feel sympathy for a fallen KGB scum, agent of the bloodiest regime in history? Or that we are induced to feel dejected, hopeless, gazing at the Twin Towers, to be demolished by a more diabolical act of Arab terrorism?

Munich is monstrous, more so because it is done with Mr. Spielberg’s well crafted approach. With a terror-themed score to signal tension like he used 30 years ago in Jaws, he shoots, explodes and spurts blood at a steady clip. One by one, they all fall down, Israelis and Arabs alike, and for a while the message is pacifism, then pragmatism, then patriarchy—with a fat French thug spewing moral relativism as nameless children scamper about in the sun—but Munich is finally minus a motive. Vengeance is wrong, Mr. Spielberg and writers Tony Kushner and Eric Roth propose. So just what is the proper response to a terrorist attack?

This is where Munich goes off the monorail, suggesting that anything goes—except striking back at one’s enemy, which is strictly off limits—serving up one giant heap of malarkey. As Avner and his band of assassins make their rounds, to Athens, Rome, Paris, and elsewhere, they either wind up practically deserving to die, or, like Daniel Craig’s character, they are morally ambiguous, gung-ho types. When, inexplicably, Avner starts flashing back to the Munich massacre—including parts he could not have seen—while having sex with his wife, it goes completely absurd.

But apparently Mr. Spielberg is serious, using the sexuality/violence pathology elsewhere in Munich. Squandering the opportunity to examine the massacre at Munich—including the futility of war by pinpricking campaigns like Israel’s covert operation—it’s hard to tell what if anything Mr. Spielberg’s picture stands for, other than loud explosions, grotesque close-ups and throwing every excuse for terrorism up on the screen. Certainly not justice.