Movie Review: We the Living 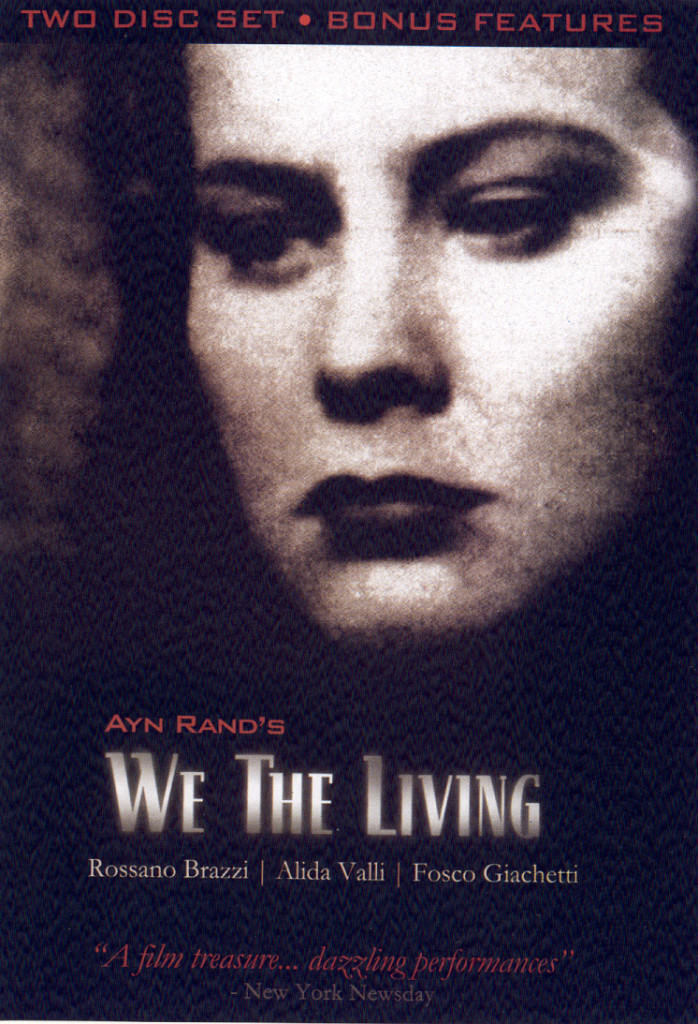 The movie adaptation of Ayn Rand’s We the Living is haunting, passionate and, in today’s context, fundamentally relevant. The 1942 foreign film by Italian director Goffredo Alessandrini, which centers upon three individuals’ struggle against Soviet Russia, is a masterpiece.

The film (which is in Italian with English subtitles) begins with opening credits and character photographs imposed over an inferno. Renzo Rossellini’s insistent score builds dramatic tension, and the music and images immediately convey the seriousness of the story’s themes. A train cuts through the snow, a whistle blows, and there she is—one girl, bathed in light—sitting in the train.

She is Kira Argounova (Alida Valli), a young, striking and confident contrast to the bleary-eyed, huddled passengers around her. Suddenly, we are thrust into the world of Communist deprivation. Arriving in Petrograd (now St. Petersburg), Kira and her family learn that their home has been seized by the state.

Everyone, Kira’s parents, sister and extended family, tries to make the best of the new situation, speculating during a meal on how long the dictatorship will last, whether to adapt, and how to fit in. When her charming Communist cousin Victor asks 18-year-old Kira about her future, she declares that she’s going to be an engineer—and build for her own sake. Someone looks at her with sympathy and asks: “Child, what are you doing in Soviet Russia?” Kira answers, “that’s what I’m wondering about.”

The rest of We the Living is her odyssey. She enrolls in the university, listens to Communist propaganda, and meets a high-ranking secret policeman, Andrei Taganov (Fosco Giachetti), whom she learns to respect. Andrei first appears with his back to the audience, surreptitiously making his way through a crowd. When we see him again he is intruding on a private conversation; and later, we find him in the shadows. Andre’s looming presence remains throughout the film.

The black and white film, shot on soundstages, is polished. The camera moves at an even pace, and many lines are taken from the novel. Director Alessandrini, with director of photography Giuseppe Caracciolo, keeps key characters in soft close-ups with lighting that emphasizes the actor’s face.

The technique is especially effective when Kira meets Leo Kovalensky (Rossano Brazzi). In long, lingering takes on the young lovers, who rendezvous in a wintry garden, the story’s essential theme about the sanctity of life is cast in unforgettable images, simple, intimate words and stirring music. As they part after their first encounter, Leo’s caveat to their plans to meet again—“If I’m still alive and if I don’t forget”—is at once a statement on totalitarianism and a signal of his impending demise.

As Leo, Rossano Brazzi fits the part, and it is easy to underestimate him given the actor’s prettiness (when Kira meets Leo in the novel: “Her face was a mirror for the beauty of his”). As intense Andrei, Giachetti is excellent, though he is considerably older. From slippery Syerov and callous comrade Sonia—exactly as described in the book—to defiant Irina and gruff Timoshenko, casting is perfect. This is particularly true of Alida Valli as Kira; she rises when speaking of bridges and going abroad, she sinks when losing Leo and she radiates from the screen.

Enchantment and bitterness collide in a climactic confrontation. Blacklisted Leo’s reckless scheme and Kira’s desperate charade with Andrei to save Leo’s life collapse, and We the Living ends as it must, as a sad but truthful tale of totalitarianism. Clocks, calendars and capsules of saccharine—all are symbols that their days are numbered.

The power of Ayn Rand’s We the Living is steeped in her ideas—tightly integrated plot points that match today’s headlines—and the film is a skillful expression of her literary warning against dictatorship. Introducing the novel’s new trade paperback edition (read my thoughts on the novel here), Leonard Peikoff writes that We the Living is relevant because it is about an ever-approaching future. Now—especially now—one can add: so is the movie.

Originally published in the November 2009 issue of Impact, newsletter of the Ayn Rand Institute (ARI).