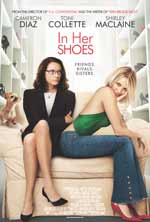 Teaser: Lost in theatrical release, Curtis Hanson’s softened follow-up to 8 Mile, out on DVD, should have been a smash …

Quickly forgotten in theaters, In Her Shoes starring Cameron Diaz, Toni Collette and Shirley MacLaine—as they have never been seen—is a soap opera with a touch of class from director Curtis Hanson (8 Mile, L.A. Confidential). It’s out on DVD.

They are also all each other have, and that drop of sentiment is enough juice for a sharp movie that is best savored for lively, intelligent humor and star performances, from Collette and Diaz to supporting players. In Hanson’s hands, they all shine, and that includes showy Miss MacLaine, who’s been playing overblown parts for years.

Here, as a long-lost grandmother whose distance may hold the key to her granddaughters’ self-acceptance, Miss MacLaine is understated. Bathed in Florida corals and tucked in a tidy retirement village apartment, surrounded by a family of wonderfully aging friends, she acts with her eyes, her mouth and her body and it works—she is a grandmother, not a diva.

Miss MacLaine appears well into the story and writer Grant and director Hanson scatter most clues in the lead up to her introduction, so pay attention. Lawyer Rose has had it with her irresponsible sister, Maggie, a floozy who thinks she can vamp her way into television. Maggie is so screwed up she steals everything in sight, from a wad of bills to her sister’s boyfriend—and, she’s down so low, she hits him up for cash after doing the dirty deed. She figures: with what she’s got—and she’s got legs for days—why bother with ethics?

On the other foot is Rose, who plays by the rules and keeps getting hurt. Only when the Philadelphia sisters separate in a split from heel to toe do they begin to discover who they are as individuals and what they mean to each other.

With an attitude of plucky optimism and an old-fashioned respect for values, In Her Shoes wears its regenerative theme like diamonds.

All DVDs should be as well done as this single disc delight, confined to three unique features as delicious as the picture. Start by watching The People in the Shoes, which is better than it sounds. It is really a documentary by director Curtis Hanson about the movie and how he envisioned it, complete with easily overlooked details laid bare.

Two other features, From Death Row to the Red Carpet: The Casting of Honeybun and A Retirement Community for Acting Seniors, are also good. The former is about the movie’s little dog pegged to a heart-tugging pitch for mixed breed pooches. The latter bit about seniors is a refreshing twist on celebrity puff pieces, with the movie’s extras—played by real-life retirement seniors—replacing the false modesty with natural enthusiasm while talking about the hard work of being in a big-budget Hollywood picture like they had a blast. It shows. (Buy the DVD)