Walt Disney’s animated motion picture Dumbo is 64 wonderful minutes of a baby elephant with gigantic ears who discovers his place in the world. It is a small, intimate, emotionally powerful mother-son tale with terrific songs and characters and outstanding animation—in other words, perfect family entertainment.

Released in New York in October, 1941—in Los Angeles, it premiered days after Japan attacked America—the brightly colored circus picture is irrepressibly happy, even as it depicts an abnormal child’s tale of woe. Opening with storks delivering newborns in sacks to their circus animal mothers, expectant elephant Mrs. Jumbo looks up in anticipation of her special delivery. When the little fella finally arrives, the other elephants confer the cruel nickname.

Along comes Timothy, a sprightly, city mouse who’d rather pal around with Dumbo than with a bunch of catty old show hacks. With a good sense of justice and showmanship, Timothy sets about convincing Dumbo that his handicap doesn’t have to ruin his life—that what can’t be changed can be cast to Dumbo’s own personal interest. Watching his plans unfold is a pleasure.

Dumbo, whose mother is branded mad when she comes to his defense, is assigned to perform with the clowns—a nasty, cynical lot—and, like most early Disney pictures, Dumbo is embedded with clearly drawn, multi-layered characters. The clowns are oppressive, not funny; a bully with big ears acts out against sweet Dumbo; black crows are hip but they are also kind.

It’s a timeless, seamless story about being different. Highlights include Casey Junior’s musical choo-choo train chugging the circus out of winter hibernation in Florida, Dumbo visiting his mother in solitary confinement—as Mrs. Jumbo sings “Baby Mine”—and, of course, the hallucinatory “Pink Elephants on Parade,” which remains one of the best animated sequences in history.

Dumbo works primarily as a bonding fable, though he conquers his fears and eventually stops letting pain dominate his childhood—and he does so by choice. Only then does Dumbo, deeply loved by his mother, encouraged by his friend, glide to his highest potential and he hits back at his tormentors before it’s over. Cleverly mocking Hollywood—with Timothy the capitalist rightly cashing in—Dumbo showers his mother with kisses in an ending that brilliantly integrates the story’s theme that one’s happiness is made not predetermined. 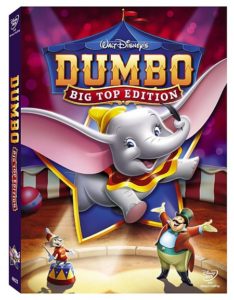 The one-disc Big Top edition DVD for Dumbo contains many of the same features as the 60th anniversary edition a few years ago but it’s still a top-flight version. Good picture quality, digitally restored, games for the kids—a colorful card game is located inside in the slip-covered, double latch box—and sing-along songs come with the package.

Rare concept art of Disneyland’s Dumbo-based attractions (there are two) is presented in a still photograph gallery. Two animated Silly Symphonies shorts, the amusing Elmer Elephant and The Flying Mouse, are incredibly well written and Walt Disney’s original one-minute introduction to the movie when it aired on his ABC television program Disneyland adds a nice touch of nostalgia.

The 15-minute Celebrating Dumbo is informative but incomplete. Names flash as speakers discuss the movie—which cost under $1 million to make—but their qualifications and knowledge of the subject are unclear. An audio commentary by animation artist, author and historian John Canemaker, reproduced from the earlier edition, is absorbing. Though missing a comprehensive overview, this Big Top DVD is icing on Dumbo’s 65th birthday cake.