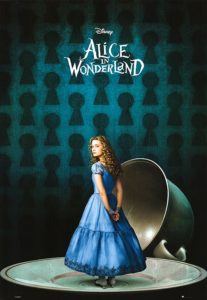 Burbank, California, native Burton, a former animator whose pictures reflect his strange, dark upbringing—I once read that he said his parents banished sunlight from his home as a child—has created his best picture since Big Fish (2003). Neither as bizarre as his macabre Nightmare Before Christmas nor as poignant as his breakout movie starring Johnny Depp, Edward Scissorhands (1990), who appears here as the Mad Hatter, this interpretation is a solid piece of filmmaking. Seen in 3D, it pops in vibrant colors for exotic scenes.

Alice has an equally solid story, which engages the senses and, in better moments, the mind. Though it dips in the middle, Alice in Wonderland rises to the occasion. This is due in large part to the earnestness of its leading lady, an actress named Mia Wasikowska. Striking the right balance of innocence and seriousness, her Alice is that rarely seen sight: a heroine. Amid Lewis Carroll’s fantastically humorous characters, Mia makes the tale matter.

After the death of her father, a visionary London entrepreneur who teaches his daughter to pinch herself to awaken from unwanted dreams, Alice attends a party centered on controlling her future. Fussed over, admonished, and offended, Alice is overwhelmed and bewildered. Taking a time out when put on the spot, Alice falls into Underland, which is just as confusing.

But she is transformed. Faced with wild claims that she is destined to slay some beast called the Jabberwocky, Alice, whom some in Underland swear has been there before, must decide for herself what to do.

Decide she does and that’s when Alice gets going. Encountering various creatures, many of which pose danger, she observes that Underland is a dictatorship of slaves ruled by a grotesque leader known as the Red Queen (Helena Bonham Carter). Enraging some and earning the trust of others, Alice is advised to visit Mr. Depp’s Mad Hatter, who befriends and protects her from the Queen’s militaristic card deck of Reds. By the time the Mad Hatter is snatched, she has seen injustice after injustice. Determined to avenge her new friend, Alice heads toward the belly of the beast—the Red Queen’s castle.

Along the way, with Tweedledee and Tweedledum, Cheshire Cat, and a pipe-smoking caterpillar (contrary to Disney’s politically correct pledge not to depict smoking) making plot-driven appearances, she invokes something of an insurgency against the Red Queen. As Alice sees more acts of cruelty and oppression, she gathers information, and courageously acts with purpose.

With a bizarre but benign White Queen (Anne Hathaway) waiting to take her Red sister’s place, and creature, poseur, and monster showing up for the showdown, Alice dons a suit of armor, like Joan of Arc, and stands alone against tyranny—having inadvertently rallied the “mad”, enslaved outcasts to her cause. The climax is exciting and, with a properly bookended moral fable bringing things back to reality, Alice emerges as a woman with a mind of her own and a desire to trade on her ideas.

For once, Burton’s strange sensibility isn’t overplayed—despite a disgusting scene involving an eyeball—and the story fuels the visuals, not the other way around. His Alice in Wonderland, vividly created, lavishly told, and voiced by an all-star cast, is worth the trip.