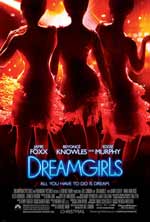 Dreamgirls doesn’t dazzle as much as it jumps, hollers and stomps in its sequined production and costume design, which it certainly does. It’s an empty, overblown, gorgeous and occasionally entertaining show that passes the time.

A thin plot is part of the problem—a girl group rises and falls—and the Ugly Duckling theme is a rehash that fails to resonate. Fresh-faced newcomer Jennifer Hudson plays the sassy lead singer of a singing trio that catches the eye of an up and coming show businessman (Jamie Foxx) who takes them to the top. Pop singer Beyonce Knowles stars as a Diana Ross clone—the movie is based on a stage musical that’s based on the rise of Motown’s Supremes—who competes with heavyset Hudson for the spotlight.

They shimmy, sleep and drink their way to the top and it couldn’t matter less in spite of the pyrotechnic designs, which explode all over the screen with a big budget musical flair. But no one girl—or any men behind them—emerges as terribly interesting.

Hudson screams her way through songs, a vocal approach some may find appealing that merely turns up the volume, and Knowles struts like Miss Ross in Mahogany (which had more soul) and plays like a church choirgirl (which she played in the horrendous The Fighting Temptations). Only male characters are certifiably bad in this movie.

Eddie Murphy is at least fun to watch as a James Brown-type cad, stringing one of the dreamgirls along and reminding everyone with his singing that his “Party All the Time” was serviceable as an Eighties dance tune. His cackling character wakes the movie up.

Four new songs are as pleasant and forgettable as the original tunes and the big tellin’-everybody-off number is an exercise in excess, unless being yelled at for what feels like fifteen minutes is the new standard for a superior vocal technique. When mainstream pop groups cover the Motown songs—which is depicted as heresy—they do smooth the rough edges.

Imitation isn’t flattery in this showstopper, which mixes romantic triangles, drugs, fashion shows and the usual fame clichés. The big girl gets the boot, the pretty one takes the stage, the innocent wises up, and it’s all fine and jubilant and has as much emotional power as a peanut butter and jelly sandwich. When Foxx’s crooked Svengali finally hits the skids, after pushing out Danny Glover’s old time record promoter, it comes off like an expensive cable musical.

Still worth a look but ceremony only for Broadway diehards, Dreamgirls is strictly a momentary diversion.

Two discs of Dreamgirls is, like the energetic movie, sometimes too much. Bare bones packaging and printed material is compensated by Building the Dream, an overproduced but logically arranged documentary that’s nearly two hours long and sure to please the movie’s dedicated fans. Other extras are typical of DVDs: it takes longer to read the box than to watch some of the features.