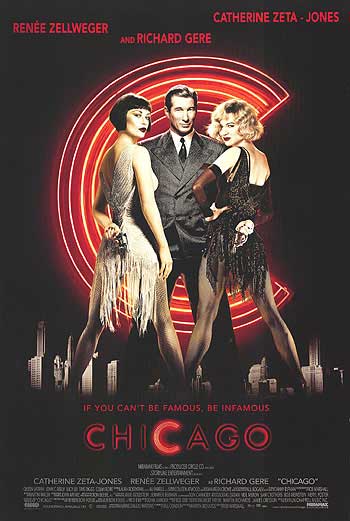 Bringing the stage musical Chicago to the screen has been a long, difficult process, but director Rob Marshall’s sassy movie has made it worth the wait. Marshall, who directed the recent hit made-for-TV musical remakes of Annie and Cinderella, has crafted an entertaining musical with several standout performances, though it’s marred by one mistake.

Telling the story of two murdering dames, Vaudeville star Velma Kelly (dazzling Catherine Zeta-Jones) and wannabe Roxie Hart (Renee Zellweger), Chicago satirizes the world’s losers by laughing at them, not with them. Every type of cheap whore—conniving women, two-timing men, sensationalist reporters, dishonest lawyers—gets their due.

Using a clever narrative style, Marshall retains the sarcasm and sex appeal of the original Broadway show—written by the late, Oscar-winning choreographer/director Bob Fosse and Fred Ebb—which itself was based on the original 1927 drama by Maurine Dallas Watkins.

Showstoppers are sprinkled throughout Chicago such as Reilly’s knockout “Mr. Cellophane” number—his voice and movements are superb. Making the most of a secondary role to the movie’s focus on Roxie, Zeta-Jones kicks up quite a fuss as Velma, moving beautifully through several numbers including “All That Jazz.” Her sexy performance makes it all look like a piece of cake. Richard Gere’s tap-dancing Billy Flynn is a wickedly slick con man and Gere’s is another fine performance in an underrated career (Looking for Mr. Goodbar, Pretty Woman, Sommersby). Veteran actress Christine Baranski sparkles in her portrayal of Mary Sunshine, the mindless mouthpiece that symbolizes the media.

Presenting his musical bag of tricks one by one—with good timing and shrewd use of his cast—director Marshall demonstrates real skill in matching talent, story and theme. Unfortunately for him and for fans—especially Fosse fans—Marshall misjudges his own choreography.

Still, Chicago is immensely entertaining and its story is, sadly, as relevant now as it was when the show premiered on Broadway in 1975—it’s a steamy, sexy good show. For those who like their satire hard-boiled, and don’t mind indulging in the cigarette-smoking cynicism of murdering vixens on the make, Chicago is your kind of movie.

The double disc Razzle Dazzle DVD edition of Chicago is an excellent piece of work. The movie still stands tall, with gorgeous lighting, crisp photography and smooth transitions, and Rob Marshall makes a good case in the audio commentary (with writer Bill Condon) for substituting his own choreography for Bob Fosse’s.

It’s the rest of what’s in this box—worth every penny at a suggested retail price of $30—that matters, including the 12-page, glossy musical-to-movie story. Bonus material plays for keeps: a solid 27-minute stage to screen documentary, extended footage of the picture’s musical performances—from three cameras—and a 13-minute gem called When Liza Minnelli Became Roxie Hart that does the Cabaret star justice, with a rare performance on Dinah Shore’s afternoon talk show in the 1970s that features a bona fide Broadway surprise.

There’s more, including a 19-minute profile of director Rob Marshall, a deleted musical number, “Class,” sung by Queen Latifah’s Mama Morton and Zeta-Jones’s Velma (with optional commentary by Condon and Marshall) and bits on costume and production and more. While a 35-minute cable music channel’s special is a waste of time—it’s mostly clips from the movie—the DVD contains enough razzle to dazzle the toughest Chicago fan. Click the image to buy the DVD.