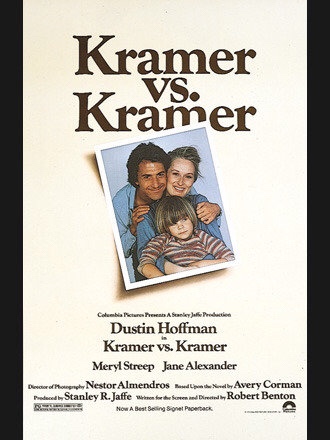 Robert Benton’s movie version of Avery Corman’s novel of the same name, Kramer vs. Kramer, begins with husband and wife in mutual conflict and ends with them in resolved conflict and mutual understanding. The woman begins the story in rapid descent, on the verge of suicide, and ends in acceptance of the facts of reality and ascent. The man begins the tale of divorce and child custody dispute in confusion and ends in clarity. This excellent 1979 film, which measures and dramatizes the impact of ignorance on one’s work, family and life, amounts to an affirmation of loving oneself as the prerequisite to romantic love and proper parenting. Take the title on its face value as a contest between departing spouses; it is fundamentally about modern man’s struggle to be his best.

This is why, on the eve of its 40th anniversary, this motion picture continues to find and keep an appreciative audience. With many layers of insight, each kept carefully on a human scale with perfectly framed pictures, timing and acting, thanks to Benton’s crisp and unyielding storytelling and direction, the Columbia Pictures film honestly, quietly and naturally depicts the inner peace of resolving marital conflict.

Kramer vs. Kramer also starts (and, ultimately, finishes) with an expression of a mother’s love. Joanna Kramer (Meryl Streep in an early and indelible performance) is clearly, deeply disturbed. But her breadwinner husband, Ted (Dustin Hoffman in a skilled and remarkable mid-career transition), can’t get away from work. As ad man Ted’s being put in charge of ads for a commercial airline, his nearly-mad housewife’s packing a bag with their son Billy’s smudged t-shirt packed inside. By the time Ted Kramer comes home to celebrate the good news of his career advancement, casting off an aside about a man in the accounting department who killed himself, he’s ignorant to his mate’s inner torment and shocked by the fact of her imminent breakdown.

At first, Ted Kramer’s in denial of the end of his marriage, one of the first stages of grief over a death or loss. He confides in his boss, also a man, bemoaning the “sisterhood” of 1970s feminism, which is expressed as a matter of fact, a minor annoyance, something to dismiss, not as hostility toward women. Ted does not yet know the damage that feminism will cause and in what ways. Kramer vs. Kramer is not a politically themed film, though it nevertheless dramatizes the injustice of feminism’s inherent sexism.

“Godammn her!” Ted yells in the kitchen in front of his young son, Billy Kramer (Justin Henry), in a formative scene. So his grief for the death of his marriage goes from denial to anger. But this Oscar Best Picture winner peels back layers to reveal the depth of Ted Kramer’s character with each new insight. He phones his empty and wife-abandoned home as the telephone rings and echoes in empty rooms during the incoming call. He sits and endures the discrimination of his boss, who prejudges that the single parent is somehow diminished in his ability to produce. He learns, too, that there’s truth in this judgment, as Billy’s preference for playing with flying machines leads to a work-at-home disaster. He bears Billy’s judgment, too, paying the price like most men of the era for not being the dominant parent. Without fanfare, Ted Kramer learns that being the parent means mastering the ability to just be.

At the time it was released, Kramer vs. Kramer made good on the novelty factor. America had mostly emerged, thanks in large part to media figures such as Phil Donahue and the self-esteem movement, from the collectivist counterculture era to an era in which egoism and individualism were under serious consideration. So audiences were curious about what being a single dad meant in practice. I’m not sure that a movie such as Kramer vs. Kramer or the following year’s exemplary and underrated Best Picture Oscar winner, Ordinary People (also based on a novel), would have been as well received in another era, earlier or later. These were complex dramas with interesting, introspective male leading characters in conflict with interesting, flawed female leading characters with young males at risk of imminent physical and psychological harm. But Kramer vs. Kramer plays well and ages well as a serious and pathfinding movie about the male parent; depicting today’s man as a work in progress, neither a wisecracking, supernatural he-man nor an asinine and wisecracking backslapper. Kramer vs. Kramer remains a rare portrayal of the modern man who takes himself and his work, family and life seriously.

You realize this most while watching Ted Kramer read to Billy his wife’s letter. You see in Hoffman’s performance, in his character’s slight vocal tremble, pause and facial paralysis combined with a father’s attempt at composure, the father’s love on display. The progression of the Kramer family unfolds brilliantly from there, with the newly empowered father boxing up the past — cleaning up the home — and, coping with his son’s heartache from abandonment, accommodating a child’s love for the other parent, covering up the sleeping child and gently closing the door on the past. Within a few scenes, as son and father bond in a home where they may forget to flush and forge new boundaries over ice cream, the same door stays open when the singularly silhouetted father earns his son’s love in a stirring affirmation of conditional love.

Writer and director Robert Benton renders and achieves this gentle transformation with elegant, purposeful photography by Benton’s frequent partner, cinematographer Nestor Almendros (The Blue Lagoon, Places in the Heart) and a dry, distinct sense of humor, courtesy of a nude scene by pre-Poltergeist Jobeth Williams. The arc ends with winking, closing doors and a triumphant bicycle lesson in Central Park with the score’s first use of horns. If the following scene illustrates an ominous threat to come after the father finally becomes publicly demonstrative in loving his son, Hoffman’s Ted Kramer thrives in adversity, showing strength, determination and magnanimity toward friend and neighbor (Jane Alexander as Margaret in an excellent turn) after Billy’s fascination with flying machines finally lands him at an Upper East Side hospital.

The script’s economy comes through with the line “stay, Daddy.” But perhaps it’s Benton’s ability to shuttle between concise words and divorced life’s deftly isolated moments in action which is most remarkable about Kramer vs. Kramer. The film’s most superbly delivered emotional moment, or certainly one of them, comes with Margaret’s kitchen scene following the descent of Billy’s toy 747. Alexander’s honest, unaffected performance balances perfectly with Hoffman’s straight act of kindness, deliverance and perfect timing by capping her admission of fallibility with an affirmation of her rational parenting and good guardianship. Ted’s and Margaret’s friendship — it is never anything but an abiding, deep friendship — is one of the most truly liberated, rational and realistic portrayals of friendship on screen.

As Joanna Kramer, who returns to assert custody of her son, Meryl Streep is too cold and pouty and in her performance one sees the future affectations and limitations of Streep’s acting ability. But with Benton’s writing and direction, Joanna’s declaration, “I want my son,” followed by Ted’s violent outburst, flawlessly captures the raging horror and bitterness of the most dangerous parts of breaking up. Howard Duff appears as Ted Kramer’s custody attorney, instructing his client to essentially check his premises and account for the positives and negatives of raising a child (Ted writes with a Flair: “Money/work affected/no privacy/no social life/no let up” all in the negatives column). But still he risks everything to raise his child.

And, with the theme that proper parenting precisely entails putting everything important in life at risk, that’s just about what it costs Ted Kramer, who discovers in himself that he’s willing to do it. The risk is worth the reward. In a cluster of scenes which take him from refusing pity to preserve his pride to that unique feeling during a split that there’s a party all around when you’re all alone to the elation of finding your own way, Ted Kramer earns the best reward. It happens simply, quietly, again, with a Saturday morning view of New York City’s Chrysler Building and an airline logo while the boy who plays with airplanes looks out at the world, spins in his father’s office chair and says “Wow!” when he sees where his dad works.

This completes the main thematic arc of Kramer vs. Kramer‘s internal journey. Joanna Kramer has embarked on (and returned from) hers, Ted Kramer has mastered taking his in stride and this leaves the beneficiary of their partnership, Billy Kramer, free to begin to gather the data for his own. As his parents sort through the court contest to decide his custody, he’s at least free to relax and ask questions about life and he does. When the title’s external confrontation comes to pass, the camera shows mother entering the courthouse with her lawyer, rising to show that the father stands alone. Even in the judiciary, however, Ted Kramer proves himself the better parent, sitting sternly (looking like Fritz Weaver) as he listens and looks upon his ex-wife with empathy as she testifies the basic premise and entire argument for her case: “I’m his mother…I’m his mother.”

Sexism works both ways — irrational discrimination against men as well as against women — and it’s often the individual of the same sex doing the prejudging and discriminating, as Kramer vs. Kramer demonstrates. Man alone, whether in silhouette loving his son, standing in a courthouse or sinking into the furniture in pain and agony, in addition to sorting through his own internal struggle, is an emblem in Kramer vs. Kramer. In dramatizing Ted Kramer versus Ted Kramer, within the context of Ted Kramer vs. Joanna Kramer, with Vivaldi’s and Henry Purcell’s music adapted by John Kander, Robert Benton captures the downfall, triumph and beauty of today’s unsung, heroic man — the producer who is also the father — who gives the woman the benefit of the doubt and loses graciously, living by example for his son to teach that man must honor the law even when the law is wrong.

The ending of Kramer vs. Kramer ought to be the least surprising. It comes with an exchange between the ones who love the child they made. It’s an exchange that anyone who chose to come together to break apart will instantly recognize and understand, whether for the sake of a girl, a boy, a home, or a possession such as a cat, dog or work of art. This is the gentle and calibrated genius of Robert Benton’s Kramer vs. Kramer; that there is that unique sense in which coming apart from another means becoming whole by healing from within and that this is the point of one’s life, whether in love or parenting…because becoming whole to pursue happiness is the purpose of being human. Yes, Kramer vs. Kramer is driven by its titular sense of conflict. But every word and picture about this intelligent movie is implanted with the truth that conflict can be resolved.