Looking Back at Bambi

With generations of fans and millions of dollars in profits, a 900-word script and a running time of 69 minutes, Walt Disney’s classic Bambi is an example of quality and economy. Its staggering success is not unlike the story of its title character: unstable in the beginning, unmatched in the end. When the animated feature premieres on DVD format for the first time on March 1, the accompanying historical features assure that Walt Disney’s favorite picture also offers 21st century Hollywood several lessons in making money with movies.

Bambi, a coming of age tale of a young deer in the forest, opened in London on August 13, 1942, in the middle of a world at war. After the Japanese attacked the United States by bombing Pearl Harbor on December 7, 1941, it was the only production at Disney Studios in Burbank, California, to continue. Four years after Disney’s animated Snow White and the Seven Dwarfs made a mint and changed moviemaking—and six years following Disney’s premiere of Donald Duck—Bambi did not perform well at the box office during its original release. According to the DVD’s documentary, the picture, which began pre-production in 1936 with animation beginning in 1940, failed to profit until a release in the 1950s.

But Chicago-born Walt Disney (1901–1966) refused to give up on Bambi, though his studio had been transformed into a military reserve, and he was in serious debt to Bank of America. The DVD features rare footage of Mr. Disney pitching the conceptualization of Bambi to the bank.

The salesmanship worked. Disney got the money. How he spent it is virtually unheard of in today’s movies.

Anyone who knows Disney knows that the company’s founder regarded music as an essential aspect of a movie and Bambi’s score, as conductor John Maucer describes it, is a pastoral symphony for children. With a 40-voice choir singing songs such as the infectious “Little April Shower,” and with music composed by Frank Churchill—who wrote “Who’s Afraid of the Big Bad Wolf?” and other childlike melodies—and Ed Plumb, there are just two 18-second silences in Bambi: when man is in the forest and following the death of Bambi’s mother.

Kansas-bred artist and businessman Walt Disney selected the artists and conducted relentless research, underwriting a five-month field trip to a forest in Maine, a carcass for studying deer ligaments and musculature, anatomy courses, and birds, squirrels, skunks, chipmunks, rabbits and a couple of live deer—later released in nearby Griffith Park—housed outside Disney’s animation building. Mr. Disney said of his animators: “They had to learn animal anatomy and locomotion to a degree which you don’t get in a formal art education.”

The purpose of the tremendous preparation was an especially ambitious goal: to achieve a contrast to the studio’s earlier presentation of the cartoonish deer in Snow White. Mr. Disney—shown in color on the DVD edition describing how he conceived the seven dwarves—sought to stylize the forest animals with human characteristics while also animating their bodies and movements according to reality. One animator, Marc Davis, studied babies’ facial expressions and child psychology in order to create Bambi for the screen.

Drawn frame by frame, Bambi was intended to accomplish what Mr. Disney called “the plausible impossible”—stories that aren’t exactly realistic but depict actions which could happen. The movie, which used Disney’s new, innovative multiplane camera to add dimension, included live action rain filmed on a soundstage—Bambi’s animators wanted the moviegoer to know what raindrops coming down at one’s eyeballs felt like—and with top production values.

Another animator, Frank Thomas, used his frustrating experience on an ice skating rink for one of Bambi’s most memorable scenes, when Thumper leads Bambi to frozen water and playful mayhem ensues. Disney’s Bambi artists—referred to by the Slide Show Gallery docent as a band of individualists—were encouraged to think independently. Among those credited with creating the picture’s highly stylized look—Chinese immigrant Tyrus Wong, a background artist whose poetry, colors and simple forms followed the story’s basic function: Bambi’s life. 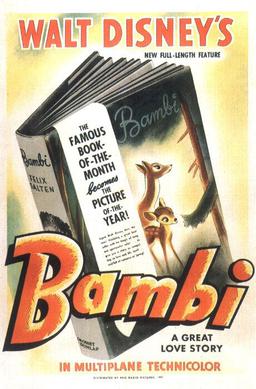 The forest saga was based on a bestselling book of the same name written by a Hungarian native and published in 1928. The novel’s author, Felix Selten, wrote six books, three of which became Disney movies, including his book, The Hound of Florence, which ended up being made into Disney’s The Shaggy Dog. Walt Disney cut the Bambi novel’s “survival of the fittest” theme.

Producer and director Sidney Franklin, who produced Random Harvest and Mrs. Miniver (both also premiered in 1942), optioned rights to Bambi in 1935; Walt Disney had read the book and he wanted to make it into a movie. After extensive talks, Franklin obliged. Mr. Disney reciprocated with an opening credit dedicated to Franklin and to “his inspiring collaboration.”

The casting rule—no famous actors—was an important choice. Thumper, the Bambi animal who became one of America’s most beloved animated characters—voiced by a kid named Peter Behn—wasn’t even an actor. Animators who heard his audition were instantly captivated by the child’s authenticity and they promptly overruled the casting director, who disliked Behn’s voice, which was a confident roost that turned out to be crucial to projecting Thumper’s boyishness.

The actress who played Scarlett O’Hara’s and Rhett Butler’s doomed daughter, Bonnie Blue, in Gone with the Wind, voiced Bambi’s love interest, Faline. Donald R. Dunagan was chosen to provide the voice of Bambi. He later served in the Marines Corps, where he decided to keep that career highlight from his subordinates, according to his DVD comments. Each actor is interviewed for the documentary.

63 years after its shaky premiere in London, under the cloud of Nazi invasion, Bambi is available on an abundant Platinum Edition DVD. While the world is still at war, and Disney is still struggling to put Walt Disney’s philosophy into practice, the legendary picture, a lesson in thinking and acting on principle, perseverance, and taking huge risks, is back, steady in its posture and ready to roll in the forest green of a new day.

This article was originally posted on Box Office Mojo in February 2005. 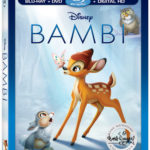