Leonard Maltin gave a rare, personal interview during a Q & A at the TCM Classic Film Festival this month. Of course, he took classic movie questions and named his favorite movie director, Billy Wilder (The Apartment, Some Like It Hot, Stalag 17) and favorite movie (Casablanca, as he did when I interviewed him in 2015 about his TCM Classic Movie Guide). With his daughter serving as moderator, he went into more personal details than he usually does. 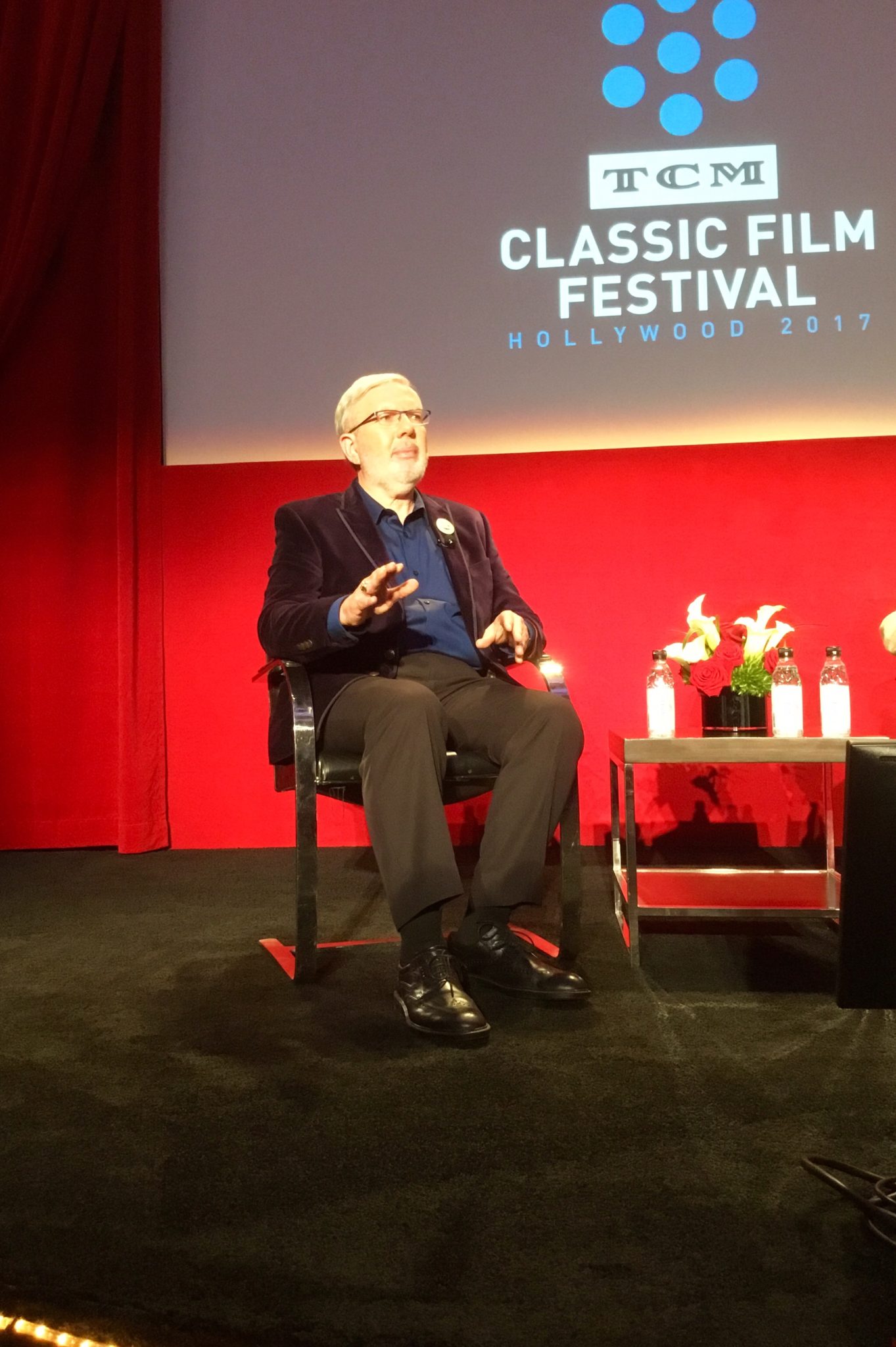 Leonard Maltin at TCM Classic Film Festival 2017. © Copyright 2018 Scott Holleran. All rights reserved. May not be reproduced without the permission of Scott Holleran.

Maltin explained that he was born in Manhattan and grew up in Teaneck, New Jersey, later marrying “a Bronx girl” named Alice (who was seated in the Club TCM audience). Maltin said that he loved comics as a boy—he narrowed it down to enjoying comic strips, otherwise known as “the funnies”—and loved to read and go to library. “I was an indoor person,” he said, adding that, back then, TV programming was filled with frequent showings of classic movies. Maltin said he grew up watching them.

He favored television shows with the Little Rascals, cartoons, Laurel and Hardy and Barbara Stanwyck movies, and ABC’s Disneyland series hosted by Walt Disney, whom Maltin correctly and with reverence said “taught us the history of his company and his animated cartoons.”

If there’s a theme in Maltin’s work, it is Disney, the legendary, Burbank, California-based movie studio whose classic pictures Leonard Maltin regularly highlights for Turner Classic Movies, itself the byproduct of a great American businessman who made money by trusting his own ruthlessly independent vision and judgment. As a youth, Maltin, who elicited awe from the audience when he said he was self publishing his writings in fanzines at the age of 13, had been accepted at New York University—where he studied journalism—when he was asked by a Signet editor to create a movie guide, which he subsequently did. But it was his passion for Disney that helped Maltin make his way to Hollywood.

He said that he was “devastated when Walt Disney died” and, at some point, while doing research for his movie guide, he telephoned the San Fernando Valley studio and talked to Arlene Ludwig, whose father was Irving Ludwig, president of Buena Vista Pictures. Maltin asked for and received special access to Disney pictures so they were fresh in his mind for review and coverage. He would note the end credits (there were no comprehensive credit listing sources back then) by hand from watching those Disney prints. These classic movie tales provide a crucial context for both the meticulous detail of his movie guides and University of Southern California film professor Maltin’s deep knowledge and abiding respect for the Walt Disney studios legacy.

Other facts learned from his Q & A: Maltin doesn’t like giving stars to films but when an editor asked him to do so, he relented and admits that readers like it as a shortcut to assessing his estimate of a film. Bette Davis once sent the Maltin family a Christmas wreath. He used to take passenger rail service to the nation’s capital to conduct movie research at the Library of Congress. He describes diminutive movie star Gloria Swanson as “formidable” in personality and talent. Asked to name his favorite foreign language picture, he paused: “Maybe La Strada“. But he says he “loves Truffaut” and “wants to be more conversant in Japanese cinema.” Asked about his approach to work, said he loves being his own boss. Asked about his reading habits as they relate to movies, he answered that he first read David Copperfield by Charles Dickens because he had seen and been moved by the movie version. When asked about his family, Leonard Maltin introduced his wife Alice, who accompanies him to screenings, and admitted that it “helps to have married a movie buff.” Maltin said that his daughter Jessie watched the barn-raising scene in Seven Brides for Seven Brothers as a toddler “over and over on Laserdisc”, adding that it’s still her favorite movie, which she watched at a TCM Classic Film Festival after getting to meet its leading lady, Jane Powell. Asked to name one of Hollywood’s last, living “great broads”, Maltin didn’t flinch or hesitate: Angie Dickinson.

Answering my question about whether he ever asks for a second screening of a movie he’s assigned to review, Maltin said he rarely does because a critic reviewing a movie “should not have to see it again” if it’s a good movie. And, asked by this writer to name one quality that differentiates today’s movies from classic films, Maltin said that he finds today’s close-up shots annoying (“I call it counting pores”) though, citing last year’s Arrival and Jackie, he likes the use of close-ups in movies when it’s warranted.

Maltin said that the main difference between movies then and now is that today’s motion pictures are losing what he calls the art of storytelling.

“There used to be movies driven by fiction writers of short stories in magazines,” Maltin said, noting that fewer readers of abundant short fiction and other source material contribute to the loss of well-made, story-driven movies. “Broadway did hundreds, not one or two, productions a year.” Leonard Maltin’s hour-long audience interview ended with a pointed question asking what he seeks when he goes to the movies. After qualifying his answer that one could reasonably have any variety of motivations to see movies, Maltin said that, essentially, he goes to movies “to be uplifted.”

This article oringally appeared on LA Screenwriter in April 2017.