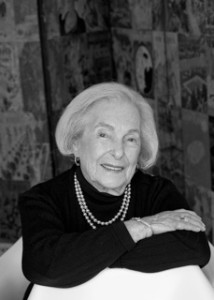 The Center for Self-Directed Learning was an educational experiment located in New Trier’s room 101. The alternative school within a school, which was terminated due to low enrollment, rejected teaching, grading and testing.

From 1972 through 1982, the Center was attended by over 600 students, including this writer, Oscar-nominated actress Virginia Madsen (Sideways) and U.S. Sen. Mark Kirk (R, IL). The Center closed after New Trier East merged with New Trier West.

Center co-founder Arline Paul, who was both my adviser and “facilitator”, recently spoke with me about the Center and the newly self-published student and faculty memoirs, Becoming Self-Directed Learners. Paul is the only New Trier faculty member at the Center for its entire existence.

Scott Holleran: What is the impetus for the book?

Arline Paul: It grew organically out of [Center] reunions. My son Mark helped me with editing, marketing and computer stuff. [Center co-founder and co-editor] Jim [Bellanca] was kind of skeptical at first but once we realized this was a significant piece of material in educational history, we went ahead and funded the book. The purpose is to generate debate about education.

Scott Holleran: Where did you attend school?

Arline Paul: Traditional public schools in New York and Brookline, Massachusetts. But Brookline High School had connections with Harvard and there were always graduate students and professors interested in what we were doing. When I went to [Wellesley], counselors told me it was one of the best high schools in the country.

Scott Holleran: Is New Trier is one of the best high schools in the country?

Arline Paul: I think it was. It probably still is.

Scott Holleran: Let’s talk about the ideas that defined the Center. James Bellanca writes about being influenced by Carl Rogers, who rejected the concept of teaching. Is the Center based on hostility to teaching?

Arline Paul: You have to define teaching, which is a very broad term. Is it lecturing? You can learn by reading. You can learn by listening—by experiencing, by doing. Look at the sciences. They learn by doing. That’s why they have science labs. If you put hydrogen and oxygen together, you get water, but if you actually do it, you never forget it. And you get the whole concept of atoms and molecules. The basic idea is that students are human beings and they deserve a chance to develop their humaneness and their intellect and their curiosity needs to be respected – they need the freedom to learn, to grow. I’m always amazed that people expect students to be confined in a high school and then at 18, go off to college or a job with very little preparation for living at a college campus and in the world at large. Students at the Center built their own program, so college and life didn’t scare them. They didn’t act out as much.

Scott Holleran: What is the greatest advancement in education since the Center closed?

Arline Paul: I don’t think there is one. There’s such a diverse group of learning styles and kids are caught up in this chase of grade point average and class rank. Then, there are kids at the other end of the spectrum that have no sense of learning about ancient history or literature. We’ve got to be more open in education to meeting students’ needs. That’s what we tried to give to the kids in the Center. So, I am hard put. Maybe Common Core will do more but it seems awfully rigid to me and it seems like we have an educational-industrial complex similar to the military-industrial complex that Eisenhower warned us about. We’re teaching to the test, for grading and reporting and it’s hard to fight a [crony-government] complex. I hope for more charter schools—some are more [focused on] the individual—but I don’t know. I’m discouraged.

Scott Holleran: Let’s talk about the Center’s practices as discussed in the book. What was learned in the marijuana class?

Arline Paul: I have no idea.

Scott Holleran: What was learned in “Soviet Studies”?

Scott Holleran: What was the best class in your view?

Arline Paul: One that appealed to me personally was the Constitution class, which led to the creation in Illinois of the Center law [an education bill proposed based on Center students’ proposal, adopted by the Illinois General Assembly and signed by the governor]. That was awesome. The second was our trip to Italy. We learned architecture history, saw the paintings in museums and [Michelangelo’s] David, Pompeii and the Herculaneum. The program was constantly evolving as the students entered and graduated. Each semester the learning groups were different as student interests were different.

Scott Holleran: Chaos is a word used by several former students in multiple essays. One student describes congregations as “communal arguing”. Was chaos crucial in the Center?

Arline Paul: Yes, because in many ways it demonstrated the intensity of feeling and variety of opinions that people felt free to express and it was primarily during registration when we were trying to develop classes—we called them learning groups—and people were trying to come up with ideas. Those first few days of 100 kids or so was chaotic, there’s no doubt about it.

Arline Paul: Think back to 1973. College campuses were roiling with activism, there was a lot of questioning about institutions and the kids had older brothers and sisters on college campuses. They got caught up in being active citizens.

Scott Holleran: Former Center student Sen. Mark Kirk writes about calling Idi Amin as a joke. Was he a joker?

Arline Paul: I don’t know. There was a lot going on that we didn’t know about just as there is in regular high school. He was a very busy, active student.

Scott Holleran: The Quaker-based consensus approach used in the Center was used in the Occupy Wall Street movement. Are other Center practices gaining acceptance?

Arline Paul: I’d have to think about that. You hear a lot more about town halls now. The Tea Party movement may be influenced by grass-roots activism. They’re kind of the opposite of the Occupy movement—they don’t occupy—but they do put themselves forward.

Scott Holleran: What is the impetus for the Center’s replacement for letter grades, the synthesis?

Arline Paul: The New Trier records office. Students in the regular school were able to show their grades and it was very easy to file [for college admissions]. So we came up with the synthesis to summarize learning experiences. The synthesis would have a quote from each evaluator. The synthesis was the compromise with [New Trier’s administration to assure the Center’s compliance with regulations].

Scott Holleran: Most former Center students that contributed to the book work in religion, academia or government. Why?

Arline Paul: I’ve wondered about that myself. I’ve noticed that many are in [what Paul regards as] the helping professions. Maybe they were [already] like that and the Center, with its idea of community, fit.

Arline Paul: Seeing students at ease, comfortable and feeling that they belonged and were involved and had the freedom to come and go as they needed knowing that in the end they were responsible for what was accomplished and for what was not accomplished.

Scott Holleran: Looking back, would you do anything differently at the Center?

Arline Paul: That’s a hard one. [Long pause] Probably not.

Scott Holleran: What do you view as the purpose of a proper education?

Arline Paul: To learn about yourself and, in the process, learn about the world—and where you fit in society.

This article was originally published in a July 2014 edition of The North Shore Weekend.