Books: We the Living

We the Living: Another Ayn Rand Novel for Our Times 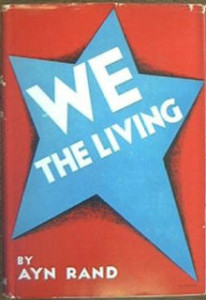 Though increased sales of Atlas Shrugged by Ayn Rand have been getting the attention, Rand’s lesser-known first novel, We the Living (1936), is also strikingly relevant in today’s times. Rand once described We the Living, recently published in trade paperback and adapted for a film that’s available for the first time on DVD (read my movie review here), as “a book for Americans.”

Three characters embody the theme. Heroine Kira loathes Communism, loves life, and is in love with a man named Leo, a blacklisted aristocrat struggling to survive. Idealistic Andrei is a Communist who discovers what his philosophy means in practice. When Leo becomes gravely ill, Kira, aided by Andrei, is forced into desperate acts. Leo disintegrates, Andrei destructs, and Kira remains unconquered. Each character is crushed.

We the Living depicts the cause of their devastation: dictatorship. The Soviet government controls the economy, rewarding the dishonest, punishing the honest and corrupting everyone. Banks and private property are seized. Regulations prohibit private “speculators” from smuggling goods into the city, forcing Kira to wait in line for hours to obtain food. Resources become scarce. Infrastructure crumbles. Medicine is rationed.

When dying Leo is refused admission to government hospitals, Kira risks everything to save him. By the time he gets medical treatment, Leo has lost the will to live. After he is discharged, Kira eagerly asks: “And you’re well? Quite, quite completely well? Free to live again?” Leo replies: “I am well—yes. As to living again…” He shrugged. His face was tanned, his arms were strong, his cheeks were not hollow any more; but she noticed something in his eyes that had not been cured; something that, perhaps, had grown beyond cure.”

We the Living is powerful because it is not merely a journalistic account; it identifies the moral deficiency of totalitarianism—the idea that each person must sacrifice for others—and it offers rational selfishness as the alternative. The conflict is most dramatic in Kira, an egoist. Despite denunciation of the word “I” as evil—the word “We” is decreed as the slogan of the future—she defiantly chooses to live for her own sake.

Kira’s choice is an expression of what Ayn Rand called the virtue of selfishness—an idea scorned by America’s current administration, which has adopted collectivism and self-sacrifice as the nation’s governing principles. President Obama has intervened in the economy more than any president since the 1930s, firing CEOs, imposing income caps and proposing higher taxes—while courting catastrophe by incurring astronomical debt. The Obama administration has nationalized the largest banks, insurers and automobile companies. There’s a major step toward an economic dictatorship like Soviet Russia’s every other day.

Ayn Rand saw the signs of an emerging American dictatorship over 40 years ago.She wrote that the U.S. was fast approaching the stage “where government is free to do anything it pleases, while the citizens may act only by permission; which is the stage of the darkest periods of human history, the stage of rule by brute force.”

The U.S. has been heading toward totalitarianism for a long time. The government controls every aspect of an American’s life, from what car to drive to how much money one can earn. A home may be seized by the state under eminent domain. A radio or television show may be censored. Air travel must be approved by the government. Americans have been incrementally losing their rights for decades; Obama is simply and rapidly hastening the demise.

Unless we reverse course, the slow, insidious misery depicted in We the Living will soon become a reality in America. As Leonard Peikoff warns in his new introduction to the novel, when Americans reject self-interest for self-sacrifice, “the end result is thought control, starvation, and mass slaughter.”

The world is full of dictatorships—Iran, Saudi Arabia, and China—yet, because it was founded on individual rights, America stands alone as man’s best hope for freedom. America is changing from a nation based on rights to a state run by government control. If you do not know what that means, to paraphrase Ayn Rand—who lived under and escaped dictatorship, and wrote about it—We the Living will help you to know.

This article was originally published in the Providence Journal and the Korea Times and distributed by Scripps Howard in 2009.