Dreams from My Father: A Story of Race and Inheritance by Barack Obama
By Scott Holleran 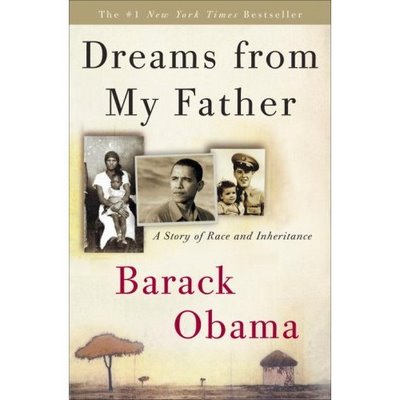 Illinois Senator Barack Obama’s mythologized backstory, contained in his 1995 bestselling Dreams from My Father: A Story of Race and Inheritance (2004 paperback edition), is a compelling narrative. As embellished autobiography—using what must be fictionalized dialogue—and as cultural commentary, it is relatively engaging. At times, it is moving. As a character guide to a man who may become the nation’s forty-second president, it is elusive and relevant.

Organized in three parts—simply subtitled Origins, Chicago and Kenya—and written in a Sunday newspaper supplement style that blends campfire storytelling and rhetoric, Dreams from My Father fulfills its one-sided title and embarks on Sen. Obama’s remarkable journey to the land of his father, Africa. From his childhood in Hawaii and Indonesia to his days in Los Angeles, New York and Chicago, he recounts his life, culminating in a visit to the Dark Continent, where his mysterious late father— a black man who left Obama and his white mother when Obama was young—had once apparently dreamed of a life abroad.

The Harvard Law School graduate triumphs, to the degree that he does, having apparently embraced and presumably vindicated his father’s idealism. That alone distinguishes Dreams from My Father from most of today’s trivial bestsellers, especially the typical political tripe. Obama emerges as a byproduct of the mixed economy, establishing vague political goals wholly within the context of the welfare state. He asserts that his story is uniquely American and he frames Dreams—including his outwardly assimilationist vision of a truly United States of America—accordingly. As he suggests in the preface to the 2004 edition: “…the embrace of fundamentalism and tribe…dooms us all.”

The first part, Origins, refers to the title of a book which inspired the liberal senator as a child with various religious myths: a Hindu tale of a tortoise carrying the world on top of its shell, Bible stories from the book of Genesis and the Greek myth of Prometheus, stealing fire from the gods for man—an idea Obama later applies to himself, bringing knowledge to weary residents of a Chicago housing project.

The personal account appears to be straightforward, though it tends to be flowery and conspicuously fictionalized. Born of an interracial marriage, the portrait of a brown-skinned boy raised by a white mother and a Moslem stepfather is hard to resist. Obama writes about his grandfather, Stanley—known to Obama as “Gramps”—as “something of a freethinker” who embraced “freedom and individualism” and was “always searching for that new start”, which brought his grandparents and his mother to Hawaii, where he writes that his mother met his father at the University of Hawaii.

The role of religion in Obama’s life appears to stem partly from his maternal grandparents; Gramps was a cafeteria religionist who dabbled only once in Unitarianism—“you get five religions in one,” he apparently said. Obama writes that his grandmother, affectionately known as Toot, responded: “For Christ’s sake, Stanley, religion’s not supposed to be like buying breakfast cereal!”

When Obama’s mother, a distant figure in these pages, marries a man named Lolo from predominantly Islamic Indonesia, Obama’s journey begins in earnest, depositing him a Third World country, an experience which appears to have been formative to the unity theme of Obama’s [2008] presidential campaign. The child Barack Obama learns to adapt to the abrupt downgrade from life in Honolulu to Lolo’s modest home—with dysentery, fever, and lack of heat, electricity, and hot water, conditions his mother shockingly, knowingly tolerates.

Obama claims that life with Lolo had an upside. When Lolo catches young Barack following his mother’s example of giving money to beggars, Lolo chides his stepson, advising that it’s “better to save your money and make sure you don’t end up on the street yourself.” By then, Obama knows he’s more or less on his own; by the time he heads to Occidental College in Los Angeles, he carries a letter from his father in Kenya urging Barack to “look after yourself.” Having been surrounded by poverty and despair in Indonesia, and having observed that Lolo managed to steer the family out of harm’s way, Obama explains his interpretation of faith: “a [belief] that rational, thoughtful people [can] shape their own destiny.”

At college, he writes that he struggled with the idea that race or blood is central to one’s identity.

Dreams from My Father is short on explicit principles and one is left to suppose that adaptive Obama absorbed his political ideas—the book is peppered with vague references to various radical leftist causes—in academia. He barely mentions that he worked for a Ralph Nader group preaching recycling in Harlem. He glosses over aiding the Soviet-backed African National Congress, mentions without elaboration that he fasted on Sundays and criticizes the Shah of Iran while declining to cite a single reference to the Shah’s far more brutal successor, Ayatollah Khomeini—let alone Khomeini’s multiple attacks on the West—which dominated Obama’s adulthood. Dreams from My Father contains gaping holes about his education, how he made money, and why he opposes capitalism. It is not a presentation of his political philosophy.

Amid countless acquaintances and relatives and the use of an occasionally vulgar term, Dreams from My Father does provide a measure of the man. His first public words—muttering “there’s a struggle going on” into a microphone at a campus rally—are an evasive yet clear call to action. When Obama transferred to Columbia University in New York City, he writes that he saw “winos [that] slouched and stumbled and wept softly to themselves” and he notes that, “beneath the hum, the motion, I was seeing the steady fracturing of the world taking place.” He may be educated by the left, but he is a keen and intelligent observer.

With regard to his [2008] presidential campaign, Dreams from My Father begs the question: change from what to what? And Barack Obama comes up short of answers. There are indications throughout Dreams that Obama, unlike today’s dominant political forces Clinton and Bush, may be thoughtful, kind, possibly even decent. He describes an abandoned steel plant as evoking “the robust, brutal spirit of Chicago’s industrial past.” He bemoans the loss of civility, when men used to help women with their groceries. He notices an older black friend wearing colored contact lenses and wonders whether she could love herself as she is without hating blue eyes.

Obama accepts both pragmatism and religion here and he rejects black separatism as impractical, though not immoral. He writes that he helped Chicago’s poor residents by demanding that broken toilets, heaters, and windows be repaired and this appears to be his most serious assertion of achievement in work. Obama suggests that he intends to get similar work done in government and this is where he finds a use for religion, which Obama sees as “a vessel for those most radical of ideas—survival, and freedom, and hope.” He comes upon the Reverend Jeremiah Wright—that ranting mystic with whom Obama’s been associated for over 20 years—who urges Obama to join a church (“it doesn’t matter where, really”) in order to accomplish his community goals. Wright’s secretary warns Obama that the reverend, who spent six years studying for his Ph.D. in the history of religion, “likes to act silly sometimes.”

Despite the congregation’s explicitly racist Black Value System, which disavows “the pursuit of Middleclassness” and those persons “believing they are better than the rest,” Obama says that he belongs to the church as a means toward what he calls “the resurrection of self, a self alloyed to something larger.” He notes that the Reverend Wright—who had “dabbled in liquor, Islam and black nationalism” and “been busted for grand larceny auto theft”—sits in church “scanning the faces in front of him, watching the collection basket pass from hand to hand.”

But we already know that Obama took the Reverend’s show on the road, adopting Wright’s sermon, “the Audacity of Hope,” as the title of his next book and the theme of his [2008] presidential campaign. To Obama, Wright’s sermonizing represents something “black and more than black; in chronicling our journey, the stories and songs gave us a means … with which we could start to rebuild.” Obama ignores Wright’s premise that the individual is defined by his race.

Finally, Dreams from My Father arrives in Africa, specifically, Kenya—the title of part three—where he explores his paternal roots. Again, he is contradictory, embracing “hungry, striving, desperate men” as his brothers and calling himself an African while seemingly agreeing with a Kenyan relative who is “less interested in [having] a daughter who’s authentically African than one who is authentically herself.” A teenaged relative tries to enlighten the upwardly mobile American during a game of basketball. When the boy comments that it must be easy to find work in America, and Obama replies that it’s hard for blacks, the African youth responds: “Not as bad as here.”

Striking in this third section is how Obama takes civilization for granted, casually wondering whether his visit to Kenya might be “just like Roots,” a reference to the groundbreaking television miniseries (based on the book by Alex Haley) which was a major milestone for American blacks. Similarly, Obama abhors capitalism—referring to “the white man’s machines”—while cashing in on its rewards.

The climax of Dreams from My Father is an African safari, which is rich with tales told under the stars. These pages include a fuller portrait of his lost father—who died in a car crash without Obama having known him—who was apparently also caught between Africa and the West. “Oh, Father, I cried,” Obama writes. “For all your gifts—the quick mind, the powers of concentration, the charm—you could never forge yourself into a whole man …” An African teacher—renouncing tribal practices such as polygamy, collective land ownership and female circumcision—points out that there is no middle ground;  “you cannot really have half a circumcision.” “We can’t pretend that the contradictions…don’t exist,” she says, adding, “all we can do is choose.”

By what standard might Barack Obama choose, based on this exercise in fictionalization? The answer remains elusive; while he endorses altruism and collectivism, he does not express outright contempt for selfishness and individual rights in this book. To the extent that he can be judged by this personal reckoning, Obama is an optimist exploiting his bi-racial background to run as a candidate that seeks to unite a divided nation. Therein lies Dreams from My Father’s broad theme; that America must be united—e pluribus unum, which means “out of many, one”—in some type of noble, though distinctively vague, crusade.