Though I never saw Cameron Mackintosh’s original 1991 Broadway production, let alone the 1989 production in London where it debuted, I’ve wanted to see Miss Saigon. I attended the revised Miss Saigon, which debuted five years ago, at Hollywood’s Pantages theater. The U.S. touring show, directed by Laurence Connor, disappoints for the lack of characterization, absence of conflict and mediocrity in music.

Unlike their outstanding adaptation of Victor Hugo’s epic novel Les Miserables, main songwriters Alain Boublil and Claude-Michel Schönberg wrote music as the plot instead of building music around the plot as was the case with Les Miserables.

Unfortunately, the music is mediocre — good at best — and never moving, so the light opera isn’t strong enough to fill in the numerous plot gaps. Chief among the gaps is an absence of what ought to have been the story’s source for a primary conflict: Communism. By avoiding the dictatorship of the proletariat imposed by North Vietnam, Miss Saigon dodges the question of why anyone would be terrified of remaining in Vietnam after Communist North Vietnam defeated nationalist South Vietnam in the Vietnam War. 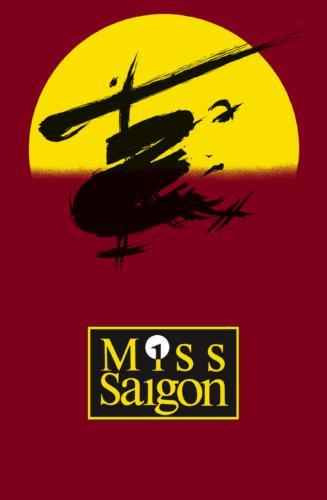 This is an extremely important and fertile area for the theatrical work. The Vietnam War, which the official Miss Saigon website persuasively implies ought to be called the Second Indochina War, had a serious and devastating impact on the West in general and America in particular. To its credit, Miss Saigon dramatizes in light opera the agony faced by everyone who lost (and to a lesser extent “won”) the Vietnam War.

Miss Saigon is problematic. The leading man and the leading woman are too sketchy. There’s not enough definition, set-up or emotional power in Boublil’s book, Schonberg’s songs or its execution to sustain the show.

The American soldier and his South Vietnamese prostitute aren’t merely stereotypical. They’re generic. This proves to be deadly in spite of the better songs. For example, Chris (Anthony Festa), the American soldier, barely gets to be a soldier for most of the show. Worse, he has no apparent goals, motives or ambitions beyond being with the prostitute or, later, his wife. He’s traumatized by nightmares but he’s never shown in combat, let alone in sustained exposure to trauma during war. So his torment is fleeting.

Kim (Emily Bautista), the South Vietnamese prostitute with whom he falls in love after one night in Saigon, likewise never expresses interest in any other endeavor than being a wife, mother or daughter. This makes it difficult to see this pair as fully functional young adults making choices — including the sort of dark and serious choices the plot hinges on — in a war-torn or postwar-torn world.

Other characters have problems, too. The Engineer (Red Concepcion), which could’ve been given depth, nuance and pathos, is ultimately cartoonish. The character is basically Kim’s pimp. Like the Thenardier couple in Les Miserables, if not as evil, he provides a degree of comedy to the tragedy.

He gets a backstory in the second act and it’s very interesting. But it raises more questions than it answers including how he came to want the American dream which he sings about and became knowing, corrupt and worldly. The character, which is integral to Miss Saigon, spends three years in a Communist concentration camp and barely shows the effects.

The interracial character could’ve been — and, in a better show, would have been — given an origin story with meaningful exposition. Even his nickname, the Engineer, could’ve been developed as a play on the monstrous social engineering brought forth by Ho Chi Minh and the Communists in the wake of a war which ravaged this agrarian Southeast Asian nation during three decades. Instead, he’s a comical pimp.

Other characters also squander potential. For instance, Gigi, the hooker with a heart of gold (and the come-on to match) pairs with another American soldier but exhibits kindness for the sweeter, more innocent Kim. Gigi’s Yankee soldier, John, offers a similar contrast. It’s his idea to hire prostitutes. He introduces Chris to Kim. In a way, he engineers their relationship. But it never goes deeper than that. And his entire postwar career inexplicably relates to fostering the war’s interracial children. John’s character could’ve really meant something. Instead, it sort of drifts without impact or definition.

Then there’s Chris’s American wife, Ellen. She gets a new song in the revised production and it’s a good tune (“Maybe”). But, again, for a musical predicated on the idea of minding the life-changing meaning of epic romantic love, Ellen is without any evident interests, goals or principles beyond being a loyal and devoted wife.

Finally, there’s the closest Miss Saigon has to an explicit villain; Thuy.

Thuy goes from the South Vietnamese soldier to whom Kim is engaged to a commissar in Communist Vietnam. What becomes of him serves as an important catalyst to the climax of Miss Saigon. With the bitterness, rage and cruelty of Strelnikov in David Lean’s epic war romance Doctor Zhivago (1965) and the sense of inevitability an otherwise decent man must face under Communism of Taganov in We the Living (1936), Thuy could’ve been one of musical theater’s great dark, tragic characters.

Each character is wrapped in a convoluted plot resulting in vagueness and disorientation. Miss Saigon begins in 1975 with no real sense of Saigon’s swirling, mass panic, desperation and madness. The musical contains none of that sense of urgency. Historic moments of Saigon’s last hours before it fell to Communists and became Ho Chi Minh City are relegated in this new production to a downsized series of scenes and numbers that lack scope and intensity and therefore snatch from Miss Saigon deliverance of its proper juxtaposition of agony, doom and wonder.

Interestingly, Miss Saigon, the stage musical, is an adaptation of Giacomo Puccini’s opera, Madama Butterfly (1904), according to the musical’s website. But the source of inspiration for Puccini’s opera is the novelette Madame Butterfly, by John Luther Long. The site describes the story as “an 1898 Asian American romance that was published in American Century Magazine.” The novelette was apparently dramatized as a one-act play by David Belasco, Madame Butterfly: A Tragedy of Japan. “After its 1900 premiere in New York,” Miss Saigon reports, “the play transferred to London, which is where Puccini saw it.”