The Hilton Cleveland Downtown offers perfect hospitality. During a recent conference visit, my first to the friendly, Forest City known as Cleveland, Ohio, I stayed at the host hotel for OCON Cleveland.

First impressions aren’t everything but they matter. Upon check-in, this Hilton rewards member received a complimentary upgrade (after a polite attempt to upsell) to a room with a view of both the lakefront and the city’s downtown. My requests, including a walking map of downtown Cleveland, were promptly accommodated. 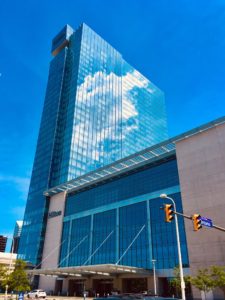 From the front desk and housekeeping to catering, dining and other staff, including the bellboys, every Hilton Cleveland Downtown employee takes pride in the work. This includes the hotel’s union representative, Aaron, whom I ran into while taking a rest during one of my downtown walks. The union rep was professional and solicitous, offering tourist information and helping me find my way around town.

This is possibly the best Hilton I’ve stayed at, with the exception of the Boulders in Arizona, though I don’t know if that’s a Hilton anymore. Besides outstanding accommodations, with good amenities, Tenillya the waitress, Steve the bartender and bosses Keith and Daryl at The Burnham Restaurant, named after the Cleveland architect, made my delicious daily meals, happy hours and mixers better. With a glaring exception, an officious woman issuing contradictory rules with her hair in a tight bun, my experience at the Burnham was exemplary.

The 5pm to 7pm happy hour follows a 3pm to 5pm happy hour at the nearby Eliot’s Bar around the bend — this, too, is named after an individual, coincidentally to the purpose of my Cleveland visit, a man with an Ayn Rand connection, Clevelander Eliot Ness (portrayed by Robert Stack in TV’s Untouchables, which Miss Rand enjoyed) — where I met a couple of Objectivist intellectuals for a glass of wine on my first day.

Happy Hour continues at Bar 32, where Nicki served while I enjoyed good conversation until 9pm. For daylight touring, sightseeing and roaming, I sought Kevin’s counsel at the front desk. He provided me with a history — he explained that the hotel opened for business on the eve of the GOP National Convention in 2016 and that both presidents Obama and Trump stayed here — and good humor, too.