This hotel is nestled into lush, green hills in Pittsburgh’s Green Tree neighborhood with perfect location, accommodations and property assets and amenities. Needing to be near this location for a recent trip, I booked here as against downtown Pittsburgh, where I recently stayed at the Fairmont, primarily because Pittsburgh’s newest Hilton hotel has an airport shuttle, which I needed to use. 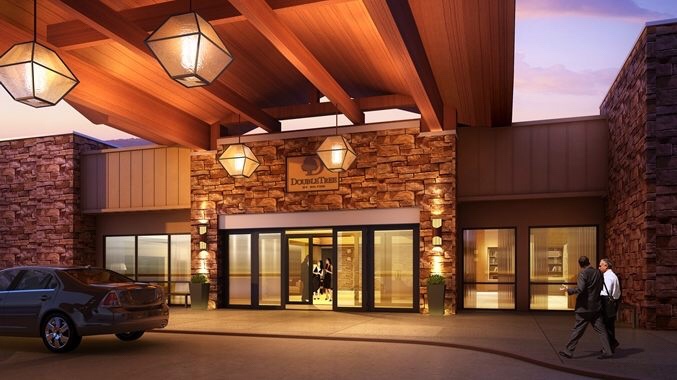 The courtesy shuttle turned out to be a hassle. I phoned when my flight landed as instructed, spoke to someone who spoke with broken English who told me that a shuttle was waiting for me or would be dispatched. Neither was the case. I went to the designated spot, waited for a while and called again. I was told that a driver had been dispatched. No shuttle arrived. I made two more calls while waiting for over an hour — each time, I was informed that the driver was nearby and on the way — and, after being told that the shuttle had to wait for a flight crew which was causing the delay, I finally pieced together that the driver wanted to wait to pick up a flight crew that had been booked at the hotel. I would’ve taken and paid for my own ride but the front desk clerk kept telling me that a shuttle was coming soon. I saw seven Parking Spot shuttles come and go during the hour plus-wait. When driver Norman finally showed up over an hour after the initial call, one other passenger — the airline flight crew he’d been waiting for — boarded. The other passenger proceeded to play hip hop on his device without headphones. Norman said nothing during the entire drive. So, expect confusion and a long wait for the hotel shuttle. This was not the best door to door service. 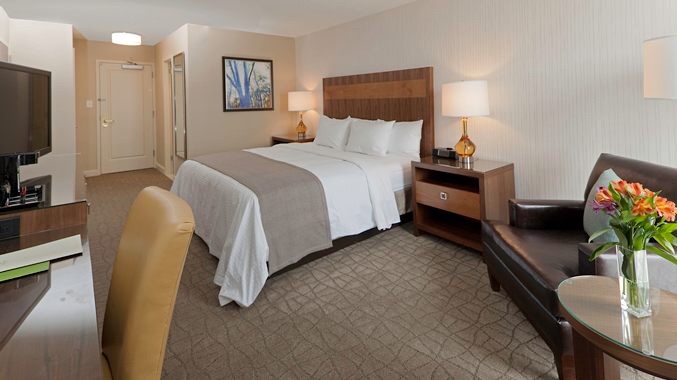 The hotel was apologetic, however. So, I’m willing to give them the benefit of the doubt that this was the shuttle service having a bad day. The front desk clerk gave me a generous voucher (and, upon checkout, the clerk added extra Hilton Honors loyalty rewards points). It’s a convenient location and I’d stay at this hotel again. I won’t be taking the shuttle if I can avoid it. But the room, with a comfortable bed and desk, chair and closet with safe, iron and ironing board, is neatly appointed. There’s also an in-room coffeemaker with Coffee Bean & Tea Leaf coffee and tea. The bathroom had what I need, though its door closed too close to the toilet, and the warm cookie upon check-in and bottled water in the room were nice and convenient.

Front desk staff, with the exception of that first night before checking in, were friendly, attentive and helpful. 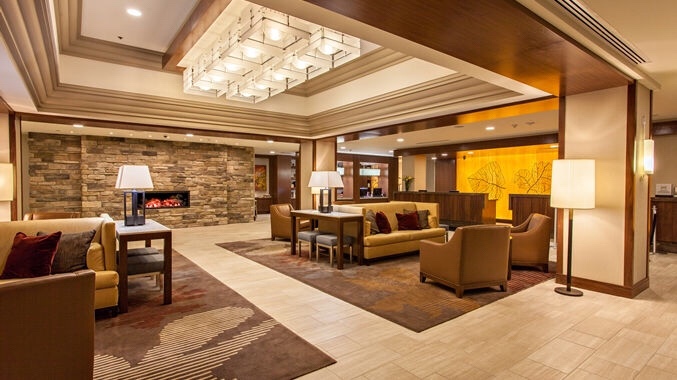 A bistro marketplace sells Starbucks coffee and various types of food including pizza. The bistro also stocks small grocery, souvenir and toiletry items. An adjacent gathering area with tables and chairs near two large screen TVs tuned to cable sports and news makes it easy to have a snack and catch up on headlines and games. Unfortunately, bistro hours vary, so it was closed one morning when I wanted to buy something.

The restaurant, which offers buffet service, is very good. Service is attentive and food is fresh and delicious. The spacious bar also features big screen high-definition TVs and serves happy hour specials. DoubleTree by Hilton Pittsburgh at Green Tree also features a shared workspace with printers, computers and supplies and a fitness room off the lobby and a swimming pool with separate hot tub.