Christmastime in the Land of Enchantment 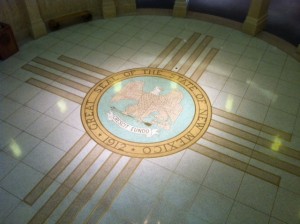 “It grows as it goes,” is the English translation of the Latin motto on New Mexico’s state seal, and a recent visit to the state’s capitol during Christmastime confirms the state’s (1912-2012) embrace of itself as a work in progress and a land of enchantment. Strolling Santa Fe’s narrow streets, with art galleries, posh hotels, a five and dime, tapas bar, creperie, courthouse, open Indian market and a couple of year-round Christmas shops, is a welcome departure from dealing with urban congestion. People are generally polite but private and, at least this December, they move briskly and with a sense of purpose. A visit to the state capitol, a day after the death of New Mexico’s Speaker of the House Ben Lujan, recalls the young state’s rich Indian history and, as I watched the capitol’s janitor lower the American flag and the last one out of the governor’s office turn out the lights (I interviewed a former New Mexico governor, Gary Johnson, when he ran for president last year), I was reminded how accessible a U.S. government can be. Seeing colorful glass works fired, blown, shaped, cut and crafted a bit north of town, as was recommended by my friend Godfrey, was a treat. Whether traveling on the government’s Southwest Chief passenger train through Albuquerque and Lamy, visiting the 19 pueblos inhabited by American Indians or indulging in the sight of Christmas luminaria lining the roofs of America’s second-oldest city in one of America’s newest states, celebrating its centennial statehood, a Christmastime trip to New Mexico is somehow at once wintry, American and, having endured a snowstorm in getting there, utterly enchanting.